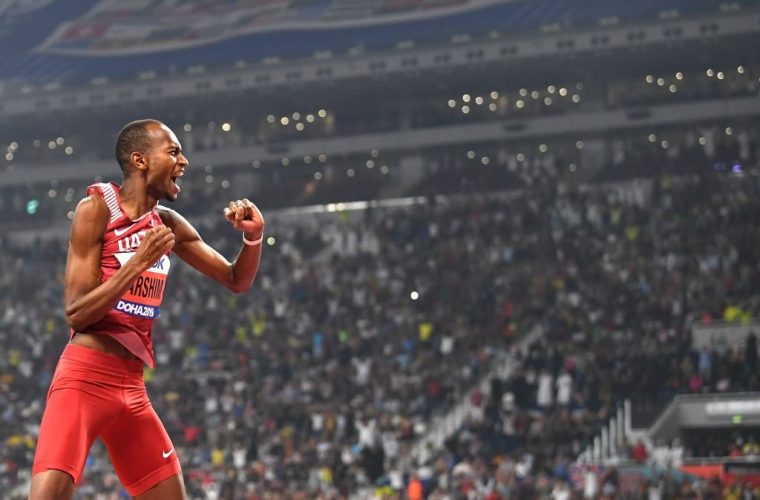 Mutaz Essa Barshim, Qatar's champion high jumper has won the Gold Medal at the IAAF Doha 2019 after clearing the 2.37 with his signature agility, ease and technique. This brings his medal total to 20.

His rivals, Mikhail Akimenko and Ilya Ivanyuk were unable to clear the 2.37, leaving the floor open for Barshim to win the gold.

The crowds roared with enthusiasm and chanted Barshim's name everytime he started his run up towards his high jump at the Khalifa International Stadium, and Barshim delivered! He struck gold.

Barshim qualified for the final round of the high jump competition after achieving a height of 2.29 meters, his personal best in 2019. He lost a season of high jumping after sustaining an ankle injury in 2018 while attempting to break Javier Sotomayor's 2.45 metre world record at the Istvan Gyulai Memorial in Szekesfehervar, Hungary on 2 July 2018. Mutaz, then, had to undergo emergency surgery for sprained and ruptured ligaments.

But, now, he's back and he's proved that he won't let anything get in his way. Mutaz Essa Barshim, the ‘pride’ of Qatar is a force to be reckoned with and has defied gravity countless times to become a world champion high jumper many times over since 2010. He is Qatar's most successful Olympic athlete being the only Qatari to claim more than one Olympic medal and the only one to win a silver one!

Just a few days earlier, Barshim stressed that winning the World Athletics Championships gold medal will be the biggest achievement of his career, especially as the tournament is held in Doha. He fulfilled his promised to continue the achievements and follow in the footsteps of Abdulrahman Samba, who gave Qatar the first medal in the tournament, briniging much joy and pleasure in the hearts of locals and expats of Qatar.

And, it's this motivation to achieve success and make history, that has kept Mutaz going, and there is no doubt, that he will continue to achieve what he's set his sights on.

To know more about Mutaz Barshim and his many achievements, click HERE.