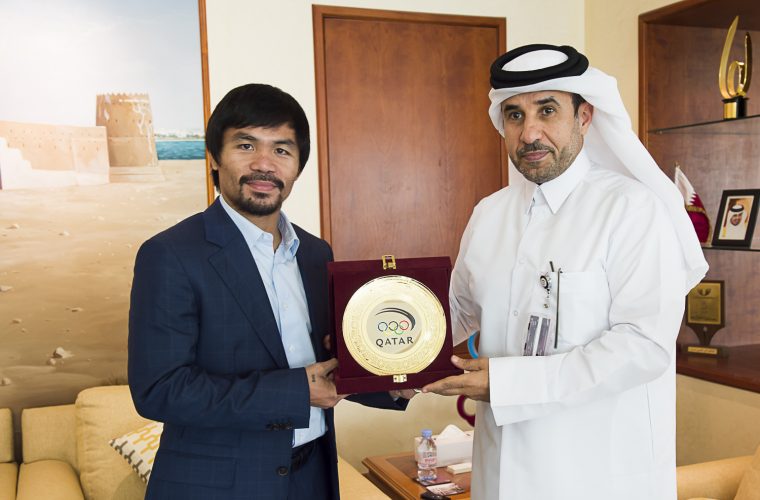 The recent announcement by the Local Organizing Committee and AIBA that Pacquiao would travel to Qatar especially to enjoy for himself the unique experience of the first World Boxing Championships to be hosted in the Middle East was met by an overwhelming reaction of excitement and joy from his adoring fans in Qatar.

On arrival Pacquiao firstly visited the beautiful Corniche to take in the city’s dramatic skyline before holding an in depth meeting with Dr. Al Kuwari, Dr. Wu and Mr. Al Kazim. The group discussed the intriguing prospect of Qatar potentially hosting Pacquiao the next time the star gets into the ring for his next bout, news which would delight all sports fans in Doha and the region.

“Manny Pacquiao is a legend who unites sports fans worldwide and the perfect role model. We are extremely proud to welcome him to our nation especially on this unique occasion for the Doha 2015 AIBA World Boxing when the sport is being showcased so positively to our community in the a magnificent setting as the state-of-the-art Ali Bin Hamed Al Attiyah Arena.

“Everyone is excited to have Manny come to Qatar including all his fellow countrymen and he has an open invitation to return. As an ambitious sporting nation we want Manny to consider Qatar when he gets in the ring against his next opponent as we have the perfect ingredients from world-class venues and passionate fans to make it a global success. I’m quite sure it would feel like he is boxing in front of home fans with the support he would have from all the people of Qatar. He will see this for himself when he attends the boxing arena today”, added Dr. Al Kuwari.

After enjoying his first morning in Qatar, Manny Pacquaio said:

“It's amazing to be here in Qatar for the World Boxing Championships. This is my first time in the Middle East, and although I'm here just for a quick visit, I really want to come back and spend more time here. The People are really warm and friendly. It seems like the country is investing in sports, which is something I really admire as people get to chase their dreams of becoming professional athletes.‎It was great to learn about Qatar's 2030 Vision, which I think all countries can learn from."

‎"I would love to have my next fight here in Qatar, and my team is now working towards that. Whether it will be against Amir Kahn or Floyd Mayweather, I'll be ready. I would love to have a rematch against Floyd in Qatar! It was a nice surprise to see so many Filipinos here, it kind of felt like a home away from home. It's also great to see the World Championship in this region for the first time. It's important to reach out to new generations and new places, which is why I have come to Doha to offer my support."

Following the confirmation of Pacquaio’s attendance to the championships organizers witnessed a further spike in sales for an event that has already proved extremely popular in the opening days. Interested soared across Qatar yesterday for tickets to attend today, Thursday, when it was announced that Pacquaio would meet up to 100 fans at the arena through an incredible online competition developed by the Local Organizing Committee.

President of the Qatar Boxing Federation and Executive Director Local Organizing Committee (LOG), Yousuf Ali Al Kazim said: “It’s amazing to see the universal appeal of Manny Pacquaio and the effect he has. We wanted to set a new benchmark for the World Boxing Championships and having Manny with has given fans a once in a lifetime opportunity to meet and see one of the greatest boxers of all time. That type of experience is priceless. We might have more stars to drop into the event in coming days so fans should get their tickets early to enjoy more moments like this one.”

For sports fans from all nations across Qatar the action and once-in-a-lifetime opportunity for all to witness the best boxers on the planet go head to head right here in Doha until Thursday 15th October. The quarter-finals scheduled from Saturday 10th October. For the latest timings and official draw and ticket information please visit: http://www.boxing2015.qa

Tickets are priced between QR10-50 and can be purchased online at https://tickets.virginmegastore.me, and in Virgin Megastores in Villaggio Mall and Landmark Mall, as well as at the Ali Bin Hamad Al Attiyah Arena throughout the Doha 2015 AIBA World Championships between 5-15 October. For more information, please see http://www.boxing2015.qa.