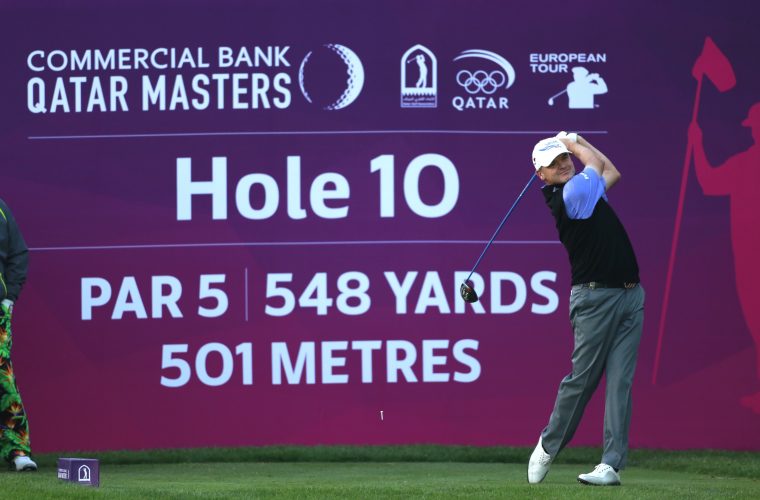 Paul Lawrie is in pole position to make history at Doha Golf Club, where 2014 champion Sergio Garcia shot 66 to lie three Two-time winner off the pace

Thursday, 28 January 2016. Doha, Qatar: Former Open Champion Paul Lawrie fired a brilliant six-under-par 66 to lead at the halfway stage of the Commercial Bank Qatar Masters and boost his hopes of becoming the first three-time winner of the Mother of Pearl Trophy.

Nicolas Colsaerts was one shot back after the big-hitting Belgian birdied his last hole at nine for a 68 at Doha Golf Club, while Spanish star Rafa Cabrera-Bello (68), France’s Gregory Bourdy (68) and England’s Andrew Johnston (69) shared third at nine-under.

Sergio Garcia, the 2014 winner, shot up to eight-under after the seven-time Ryder Cup star carded a 66 that included an eagle on 16. Defending champion Branden Grace (67) shared 11th at seven-under, while South African stars Ernie Els (70) and Louis Oosthuizen (73) tied for 20th at six-under.

The 47-year-old Lawrie, who could also become the tournament’s oldest winner, took advantage of the calmer conditions on Thursday morning to sink seven birdies, with his card blemished by just one bogey.

“It was pretty much the same as yesterday, to be honest,” said Lawrie, who has a history of playing well in the wind. “I played nicely tee to green and hit a lot of good shots. I only made one mistake, which was a three-putt from 20 feet at the 15th.”

The experienced Scot previously won the event in 1999 and 2012, each year going on to make the Ryder Cup team. Lawrie, who remains best known for his Open Championship win in July 1999, admitted his past success in Doha could help him through the weekend.

“It's got to help that you know you've won this tournament twice before. It's nice to go back to places that you know you can play well on and have done in the past. You see your name on the board a couple of times and you walk past it every day at the range. It all helps,” Lawrie said.

“I know there’s a long way to go, a lot of golf to be played and a lot of top players still up there, but so far, so good.”

Colsaerts was Lawrie’s teammate in the 2012 Ryder Cup and like the Scot, the 33-year-old Belgian is looking for his first European Tour title since that year.

Teeing off on 10, Colsaerts birdied his par-five opener and bogeyed 14 for a flat first nine. However, an eagle on the par-five first was followed by birdies on five and nine to draw within one of his former Ryder Cup partner.

“The front nine was a bit scruffy. There were probably a few shots I’d like to have again, but then I made a fantastic eagleon my 10th. That sort of got me back into therhythm I was hoping for and I playedpretty steadily for the rest of that side. Four-under is a pretty decent score today, I think,” said Colsaerts, who’s already eight-under on the par-fives.

“I'vemanaged the par-fives quite well. I still think there are a lot of birdie chances, especially today. They moved a lot of tees forward, so a lot of the holes that would require a little bit of attention were a little easier today. I mean, it's still a good test, as I'm sure you've seen on TV.”

Garcia, 36, made the most significant move among the marquee names. He birdied his opening hole on 10, picked up two more shots on 14 and 15, then fired an eagle on 16. After a run of nine pars, he sank a long birdie putt on eight, promoting a quirky celebration on his penultimate hole.

“Probably from the 17th holeonward, I hit six really good putts that looked like theywere going in and they didn't. I ended up making a huge putt on eight, although I think that celebration is going to look a little bit funny on TV,” Garcia said.

“Tomorrow, I’ll try to play within myself, obviously keep the ball down, which I know I can do, and just be patient.”

Tickets for the Commercial Bank Qatar Masters are available to buy at a range of outlets including Virgin Megastores (Online and in-store in Doha), Ticket Master, Time Out Tickets, Q Tickets, Doha Golf Club and more (full list below).

Entry is free for children under 14 years of age and each ticket purchased entitles the holder to one free round trip journey to and from the Doha Golf Club by event partner UBER.

For those looking for an extra-special experience with Michelin-starred chef Theo Randall, hospitality packages are available through the tournament’s official website www.qatar-masters.com/hospitality.