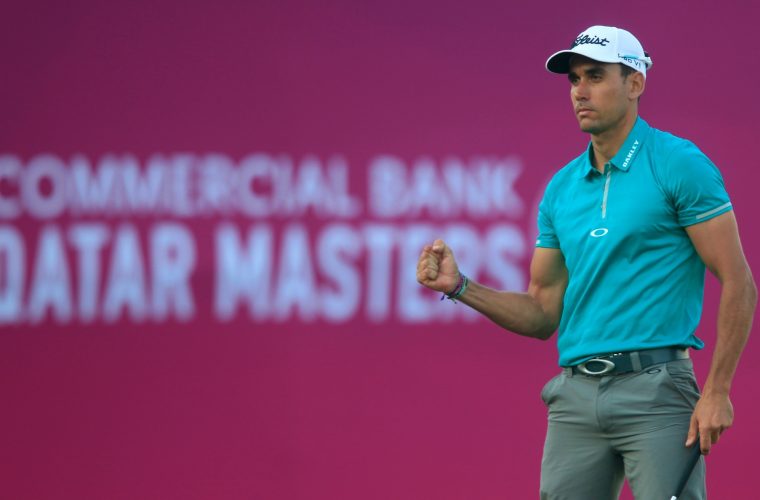 Sunday 18 January 2015; Doha, Qatar: Pablo Larrazábal and Rafa Cabrera-Bello are both seeking to succeed compatriot Sergio Garcia and become the third Spanish champion at the Commercial Bank Qatar Masters, after Alvaro Quiros paved the way with victory in 2009.

Garcia, Henrik Stenson, Justin Rose, Ernie Els and Charl Schwartzel are among the top players in the tournament’s 18th edition, which tees off at Doha Golf Club on Wednesday next week.

Larrazábal and Cabrera-Bello – Spain’s third and fourth ranked players respectively – have both won titles in The European Tour’s ‘Desert Swing’ in recent years, but each is looking for a first win in Qatar.

Larrazábal, 31, won in Abu Dhabi last January before arriving in Doha, where he has a mixed record, highlighted by a tie for 25th in 2012. However, the charismatic Spaniard enjoyed his second-best season on The European Tour last year with six top-10 finishes and is now eyeing a fourth win on the Tour.

“As a Spaniard, I was happy to see Sergio win in Doha last year, he deserved it after playing so well there for many years,” said Larrazábal, who beat Garcia in a play-off to win the 2011 BMW International Open in Germany, his second European Tour title.

“I’d like to improve my record at the Commercial Bank Qatar Masters and I’ve been playing pretty well in recent months, for the past year in fact, so I hope I can make something happen this time.”

Cabrera-Bello, 30, missed the playoff for last year’s Commercial Bank Qatar Masters by just one stroke, as he tied for third for the second time in four years. It followed a fourth-place finish in Abu Dhabi, while in November he tied for ninth in the season-ending DP World Tour Championship, Dubai.

The Spaniard, who finished runner-up in last year’s BMW International Open, is now looking for his first victory since winning in Dubai in 2012, three years after winning his first European Tour title in Austria.

“I’ve played really well at the Commercial Bank Qatar Masters a couple of times without winning and I’ve shot quite a few low rounds there, so I know it’s a tournament I can win,” said Cabrera-Bello, who hails from the Canary Islands, situated west of Morocco and on a similar latitude to Qatar.

“I always like playing there because the weather at this time of year is just like back home and maybe this is one of the reasons I generally play well in the Middle East. It has been three years since my last victory, so I’m definitely ready to win again. I’m always happy to see a Spanish winner of any event, but it would be nice if it was me this time!”

Quiros and Alejandro Cañizares, who have won six and two European Tour titles respectively, will also be among the Spanish contingent in Doha, along with youngster Jordi Garcia Pinto and Jorge Campillo, who both recorded runner-up finishes last season.

The legendary José-María Olazábal – whose 23 European Tour titles include Masters Tournament wins in 1994 and 1999 – also returns to Qatar four months after his third stint as a Ryder Cup vice-captain, having famously captained Europe to victory in 2012.

Meanwhile, players from Finland, Germany, Austria and Italy are among those bidding to become their countries’ first-ever champion at the Commercial Bank Qatar Masters.

Mikko Ilonen came close last January when he was denied by Garcia on the third hole of a captivating playoff at Doha Golf Club and the Finnish No. 1 returns for another crack at the title. Ilonen is fresh from his best season on The European Tour, having bounced back from his Doha disappointment to win June’s Irish Open and October’s Volvo World Match Play Championship in England, his fifth European Tour title.

Marcel Siem, Germany’s second-ranked player, also arrives in Doha following his most lucrative season on The European Tour. Last November, Siem won the BMW Masters in Shanghai and tied for eighth at the Turkish Airlines Open to help him secure seventh spot in the Race to Dubai, while last month he finished fourth in the Nedbank Golf Challenge in South Africa to kick off his 2015 European Tour season.

Austria’s No. 1 Bernd Wiesberger is looking to become his country’s first champion in Doha, having won twice on The European Tour in 2012 and added two third-place finishes in 2013 and two runners-up last year, in Malaysia and his native Austria.

Meanwhile, Edoardo Molinari and Matteo Manassero are each looking to become the event’s first Italian winner. Molinari, who won twice on the European Tour in 2010, finished runner-up to Ilonen at last year’s Irish Open before tying for seventh at The Open Championship in July, while 21-year-old Manassero has won four European Tour titles since 2010.

Players from Spain, Sweden, Scotland, South Africa and Australia have won multiple titles at the Commercial Bank Qatar Masters, while players from England, Denmark, Zimbabwe and the Netherlands have also lifted the Mother of Pearl Trophy.

“Mikko Ilonen came so close last year to becoming the first Finnish champion of the Commercial Bank Qatar Masters, while England only had its first champion two years ago, so I think we can again expect players of a range of nationalities to be competing for the Mother of Pearl Trophy,” Al Nuaimi said.

“The diversity of nationalities in the event is a reflection of the international appeal of The European Tour and gives our fans at Doha Golf Club plenty of players to support.”

Commercial Bank has title sponsored the tournament since 2006; the nine events during that time have been won by players from seven different countries.

Abdullah Saleh Al Raisi, CEO of Commercial Bank, said: “The Commercial Bank Qatar Masters has a wide and varied roll of honour, with champions from across the world. We are proud to be the title sponsor of such a renowned global sports event for the 10th successive year.”