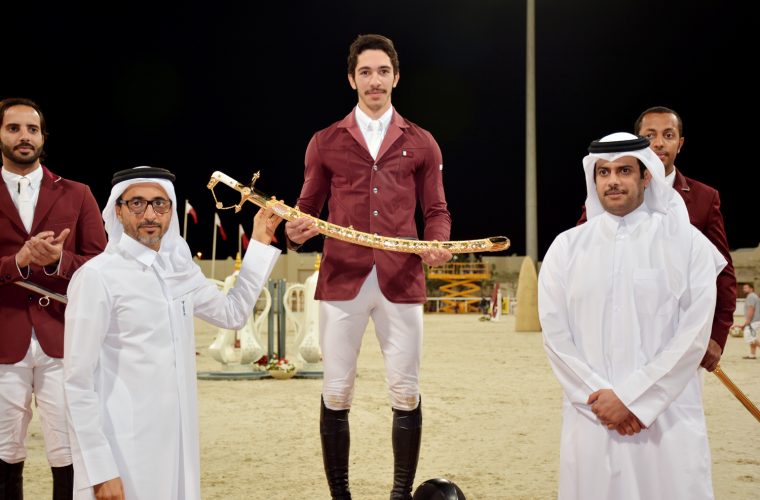 Khalid rode Tamira IV rode to victory in the jump off and clocked the best timing of 44.82 seconds to pip his Rio Olympic Games team mate Bassam Hassan Saif (astride Imperio Egipcio Milton) who finished second with a timing of 44.95.

“I feel that coming at the end helped me. But it was not that easy to win. There was a lot of tension and pressure as Bassam had posted a very good time. So I’d to make sure that I’d a clear and quick round,” a beaming Khalid Mohammed al-Emadi said.

“My mare also did respond to the challenge well and I’m really delighted to win the prestigious title for a second year in a row,” added the champion.

Second placed Bassam said, “I’m happy for my effort. I’m really surprised by the fast pace of Khalid. Of course his mare is quick but it was creditable that she had a clear round. We all train together and it was good to have such a close fight. I’ll try to do better next year.” Earlier, Hussain Saeed Hidan took Born To Joy a superb victory in the Emir’s Cup Show Jumping (130/140 cms). For the Lekhwiya rider, this was his second win in the same class in three years.

He beat Jaber Rashed al-Marri quite easily. Hamid Nasir al-Qadi (Seiclonnie) had a faster time but he suffered a drop and got the third spot.

Hidan was delighted with his victory. “I’m happy to win this competition, which is one of the major events in Qatar. Yesterday, our team finished third in the Team Event and I came back and won the title today. This is my second victory in this class. My aim is to win the Emir’s Sword in the future.”

“We’ll try to improve our skills. Our team is quite young with the riders ageing from 16 to 24 yrs. We want to be one of the best teams in Qatar and we are trying to pay back to Lekhwiya for whatever they are doing for us.

Qatar Equestrian Federation president Hamad Abdulrahman al-Attiyah was mighty pleased with the success of the competition. “We are very happy with the way the event has concluded. It was our aim to achieve the best for HH The Emir’s Sword and we are glad that we have done that. Everyone is a winner in this event.”