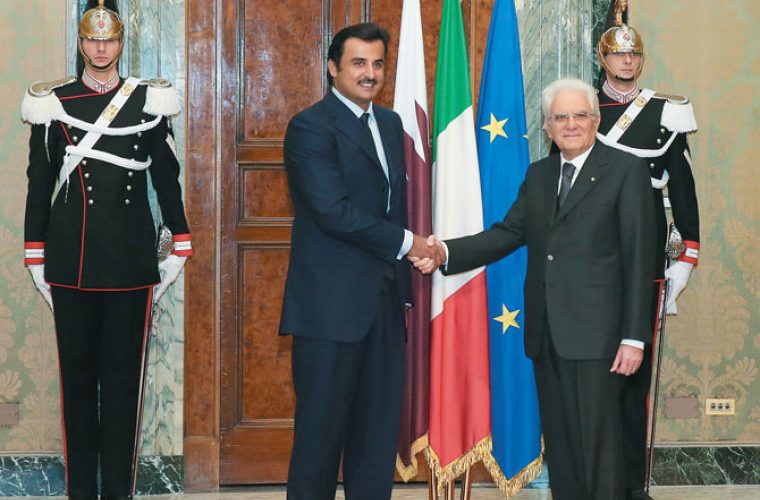 President Mattarella met HH the Emir in the Quirinale presidential palace in Rome yesterday and expressed Italy’s keenness to support Qatar in the successful hosting of the World Cup. Talks during the meeting also dealt with bilateral relations and means of enhancing them in various fields, especially in economy and investment sectors. HH the Emir Sheikh Tamim bin Hamad al-Thani holding talks with president of the Italian Senate, Senator Pietro Grasso, yesterday.A number of regional and international issues, particularly developments in the Middle East, especially the situation in Palestine, Syria, Libya and Yemen as well as the international efforts to combat the phenomenon of terrorism were also discussed. The meeting was attended by the members of the official delegation accompanying the Emir and senior Italian officials.
Earlier on arrival at the presidential palace, the Emir was accorded an official reception.

Following the talks, the Emir attended a luncheon banquet hosted by President Mattarella in his honour.

A number of senior Italian officials attended the banquet. Later, the Emir met the president of the Italian Senate, Senator Pietro Grasso, at Giustiniani Palace. During the meeting, the Emir and the president of the Italian Senate reviewed prospects for strengthening co-operation between Qatar and Italy in all areas, especially economic, cultural, scientific and sports fields.

Senator Pietro Grasso affirmed full support of Italy to Qatar in hosting the 2022 World Cup. The two sides exchanged views on the latest developments on the regional and international arenas, particularly the situation in the Middle East, and ways to achieve security, stability and peace. Discussions also dealt with international efforts to combat terrorism.

The meeting was attended by the members of the official delegation accompanying the Emir and members of the Italian Senate.The Emir also held separate talks at his residence in Rome with President of Sardinia Region Francesco Pigliaru and Claudio Descalzi, CEO of energy and gas company Eni yesterday.

The meetings reviewed bilateral relations and means of enhancing and developing them and issues related to energy.[gulf-times]