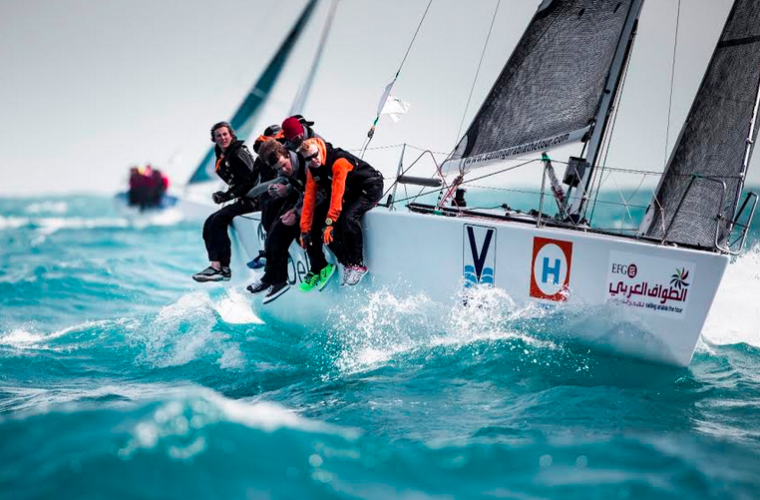 Some of the world’s most highly regarded international sailing teams are set to grace the waters of the Arabian Gulf as they compete in the latest edition of EFG Sailing Arabia – The Tour, which will take place from 14-29 February 2016. Featuring veteran and debutant crews alike SATT 2016 welcomes returning teams, Dutch team TU Delft Challenge, Swiss outfit Bienne Voile who returns for the second time and Team Averda, and debutants Team Mangold as they embrace the region’s unpredictable waters. Welcoming both amateur and professional crews the gruelling sailing challenge sees crews navigate 730 nautical miles of the Arabian Gulf in 15 days of offshore racing with a brand new route redesigned to visit six of the region’s most prestigious sailing venues – including Khasab, Sohar and The Wave, Muscat.

Heading up Team Mangold is Skipper Martin Felgenhauer whose crew includes a diverse mix of members who like many of the Sailing Arabia teams, have never sailed together before. Comprising Austrians and Germans, both male and female, experienced recreational sailors and relative novices, Team Mangold’s crew of geo-thermal engineers, ophthalmologists and biologists set to sea to discover what the GCC has to offer.

Felgenhauer is one of the more seasoned sailors in the team, though tactician and navigator Martin Lindner has sailed more than 100,000 nautical miles as a skipper, sailing instructor and race official whilst Helmut Mangold has run the annual Mangold Cup in the Adriatic Sea, a one design contest similar to The Tour, for the past eight years. Despite competing head-on in the Mangold Cup – which Felgenhauer has won three times – Felgenhauer and Mangold will be working together to combine their skills and passions for sailing in order to attain the best possible result for 2016 EFG Sailing Arabia – The Tour.

Completing the crew onboard Team Mangold are both Martin Felgenhauer’s wife Maria, and Helmut Mangold’s wife Theresia, who are both regular and accomplished sailors, along with good friend Doris Ruskovic with Tom Zahalka adding an extra pair of hands to the helming rota.

Competing alongside the debutant crew of Team Mangold are Team TU Delft Challenge who have confirmed that they will return in 2016 for their fourth year. Skippered by Wouter ‘Wout’ Sonnema, the young team of TU Delft Challenge have changed their tact from previous years as they opt not to have professional help on board in the hopes of bettering their fourth place finish last year and gaining more invaluable experience from SATT 2016.

Despite having a young team, Team Delft Challenge will rank as one of the favourites for a podium place because of the vast wealth of sailing experience they possess across a broad spectrum of disciplines. Coen ‘Coenchickabouhous’ Bouhuijs, Stijn ‘Stino’ Seuren and Jochem ‘Jotjum’ Nonhebel have plenty of experience racing J22s and bigger yachts as have teammates Jurjen Streng and Marcel Ceelen, with the latter returning to Sailing Arabia – The Tour with his previous experiences of the race at his teams disposal. Swedish sailor Pierre Gronberg – best known for competing in the World Cup Farr30 – promising sailor Jelger Rozendaal and Skipper Wouter Sonnema complete the team and have come to compete in Farr30’s having come up through the ranks using Optimist and Laser sailing dinghies.

Marcel Herrera, veteran sailor with more than 10 years’ experience is an old-hand in the EFG Sailing Arabia – The Tour, returning for his fifth year to skipper Team Averda with high hopes of scooping the tour’s trophy after missing out in previous years. Pulling out all the stops in 2016, Marcel Herrera has selected a crew he believes have the skills and qualities required to knock favourites EFG Bank Monaco off their perch.

The young crew of Team Averda comprises of sailors mainly from the UK striving to forge careers in offshore racing, with notable success in the Figaro class, graduates of the Artemis Offshore Academy or previous members of the British Olympic Sailing Team. With thousands of racing miles under their belts, skipper Marcel Herrera is confident his young crew has what it takes to match the performance of any of the professional crews, and with a second place finish under his belt in last year’s Sailing Arabia – The Tour he will hope they can go one better.

Also returning is Bienne Voile of Switzerland, and team of 12 all hail from a variety of sailing backgrounds with skills spread across Olympic and match racing classes with a glittering collection of national championship and Tour de France a Voile medals alongside badges from most of the classic races around the globe.

Among them is Tobias Etter who competed at the Beijing 2008 Olympics for Switzerland in the 470 class and veteran Thierry Bosshart, a member of the Bienne Voile crew in 2015 and the highly rated Flurina Schneider, who is just 17 years old and one of the four talented women who have been selected for EFG Sailing Arabia – The Tour.