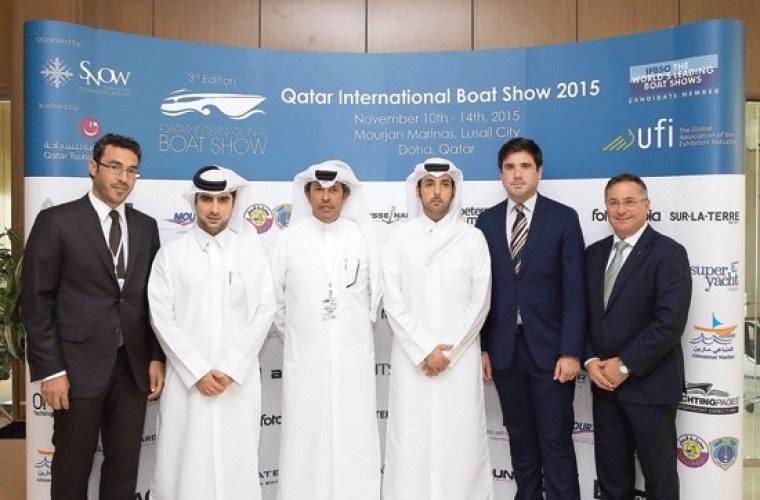 The Qatari maritime industry is supporting the show with exhibitors such as Alfardan Marine, Al Udeid Boats, Halul Boats, Speed Marine and others.

The show is expected to reach full capacity with 85 boats on display in water and on land, ranging from six metres to 77 in length.

Essa Al Mannai, Chairman, QIBS, said: “As the organisers of Qatar’s international show, our aim remains to bring mutual benefits to the marine industry and Qatar.”

Mohamed Al Marri, Finance Director, Lusail City Real Estate Development Company, said: “We believe in the importance of supporting Qatar’s marine tourism industry. This commitment led to our cooperation with Mourjan Marinas to work alongside Snowcomms to organise the first International Boat Show, and now we are here to celebrate the success of that event and announce the third edition. Lusail Marina has been designed to provide a unique experience for yacht and boat owners with access to high standard facilities. Since its opening in 2011, the Marina has been attracting yacht owners, fans of high-end marine tourism and several members of the community looking to benefit from facilities and the sea side promenade.”

Faysal Mikati, Founder and CEO, Snowcomms, the organiser of QIBS, said: “The boat show and other major events in the country enhance Qatar’s aim to become a leading destination for international events and attract short-term tourists. Boat shows are one of the premier events worldwide, and QIBS will continue to expand, improve and bring to visitors major yacht launches and news by top-notch boating brands, while supporting the local market. QIBS has earned the title of being a ‘UFI Approved Event’, making it the first approved event to be held in Qatar as a member of UFI, Global Association of the Exhibition Industry.” Because of increasing demand from visitors, Snowcomms has extended timings as follows: Tuesday, Wednesday, Thursday from 2:30pm until 9:30pm and Friday and Saturday from 12:30pm to 9:30pm.