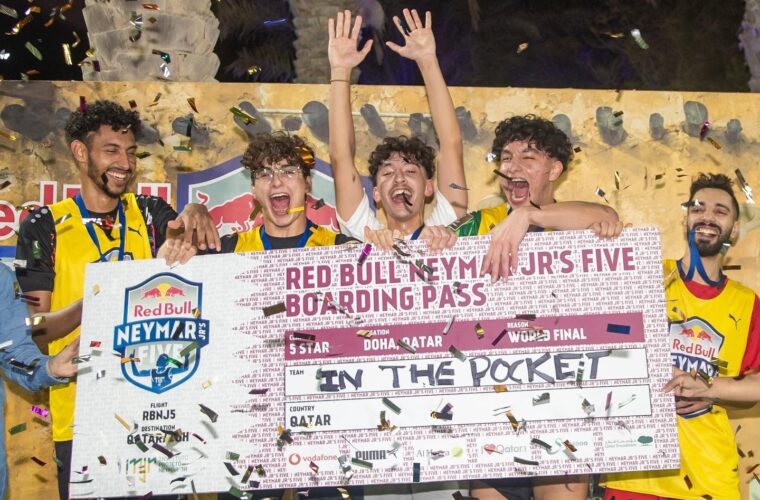 Team “In The Pocket” are Qatar’s 2022 Red Bull Neymar Jr’s Five National Final champions. Fans from all around the country gathered at the Lusail Marina Promenade, cheering, and supporting the 16 teams who made it to the national Final on Friday, April 30th.

The five-a-side football tournament for this year has been thrilling to watch. This year’s edition was brought together in partnership with Vodafone Qatar, Qatar Foundation, I LOVE QATAR, PUMA ME, Qatari Diyar and Lusail City.

The exhilarating contest featured 185 teams with 1,110 participants who showcased their skills during the four qualifying rounds that took place at Qatar Foundation, Education City. The 16 Teams Pique Blinder, Bulls, Joint Pain, Al Ahly, AF Jr’s, In The Pocket, Gambia, Shake It FC, Zaza, Shnooz FC, ZEP, Al Hilal, Nousour Cartage, Of Course, Real Madrid and Hall City made it through and went head-to-head to compete fiercely at the national finals.

After putting up a tough fight, team “In The Pocket” surpassed their opponents and beat team “Nousour Cartage”, earning their title as the national winners, outplaying them all! “In The Pocket” will represent Qatar at the 2022 Red Bull Neymar Jrs Five World Finals set to take place on May 23rd and 24th in Doha, Qatar at the Ceremonial Court in Qatar Foundation.

The national winners will be competing against other finalists from 37 countries from seasons 2021 and 2022 on clinching the World Title for the incredible opportunity to play against the remarkable Neymar Jr. and his squad. The Red Bull Neymar Jr’s Five tournament continues to find success as a global signature series for football enthusiasts around the world.