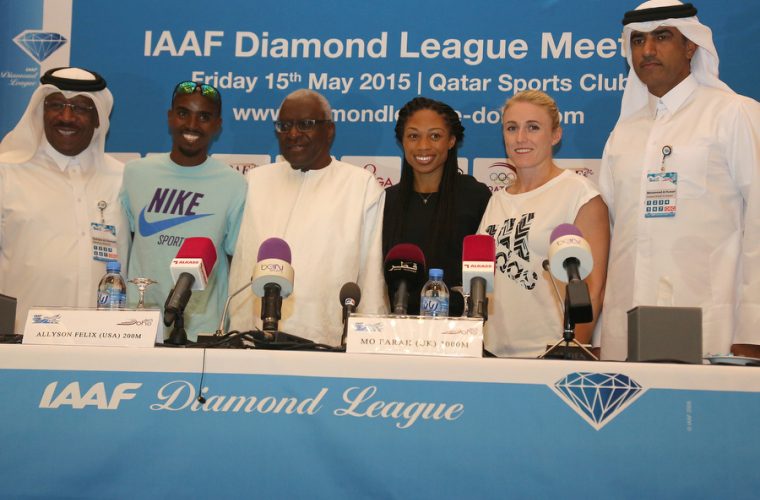 A regular visitor, an old friend and a newcomer – Allyson Felix, Sally Pearson and Mo Farah respectively - where in the spotlight at the Athletes’ Press Conference of the IAAF Diamond League Doha 2015, which takes place on Friday 15 May at Qatar Sports Club.

For the reigning 200m Olympic Champion, Allyson Felix tomorrow’s race will be her twelfth since 2005, when she first set foot on the Qatar Sport Club track. She only lost once in 2013 to Amantle Montsho in the 400m and also missed the 2014 race, but she’s determined to return to the winning days

“I am very excited to be here again and start the 2015 Diamond League season. It’s always a pleasure to be back.

“Qatar has hosted so many sports events in recent years, they are doing an amazing job. They are constantly building and introducing new innovations. Athletes always love to be here.”

Plagued by a hamstring injury almost throughout the whole 2014 season, the 29-year-old US athlete, looks determined to leave behind the days of misery and fly high in 2015:

“I am feeling good and healthy now. It was definitely difficult to return from injury. When you try to come back, you need to start again from the basics, be patient and see the bigger picture.”

Sally Pearson first competed in Doha in 2007 and this will be only her second appearance in Qatar’s prestigious athletics meeting:

“The city has grown a lot since I was last here,. Obviously it’s still hot! Qatar has done a fantastic job with the infrastructure. It will be interesting to see what will happen in 2019. Competition at the Doha Diamond League has been outstanding the previous years – I’ve seen it on TV.

“My expectations for tomorrow’s race are obviously to win, although everybody knows that in the 100m hurdles there are so many great competitors. For sure it is going to be an exciting race, but I am in a very good shape.”

Just like Felix, Sally Pearson has not be so fortunate in the last two years, as far as fitness is concerned:

“The toughest hurdles I had to overcome were the injuries. My hamstring injury in the last two years was so disappointing. It was hard to get back physically and mentally. It’s so frustrating to see people in front of you and try to chase them down when you are not in the best shape. But even if I am not one hundred percent ready, I love to compete. My body seems to work better, when I keep on racing.”

Pearson will have to confront a strong filed in Doha and among others newcomer Jasmin Stowers, who has been impressive recently with 12.40 and 12.39 timings.

“I was impressed by her times. It’s exciting to know other girls continue running quick times. I don’t know much about Stowres and I haven’t seen her racing before. I am looking forward to race her and obviously the other girls.”

Mo Farah has been quite busy since he arrived in Doha, following a number of activities organised by IDL Doha 2015, but he really relishes his first visit in Doha, especially whenever he interacts with young athletes:

“It’s great to be here, it’s my first time in Doha. I really enjoyed spending time with the kids. The see us on TV and they have this huge thinking, so Just talking to them is fantastic.

“Doha is an amazing place in terms of facilities. I visited the Aspire indoor track and the elevation rooms. Qatar should keep on the amazing work and show the world what they can do”

Farah’s preparations over the Ethiopian altitude (after training in Kenya in the last 4-5 years) went really well, so presumably he will be able to attack the European record tomorrow (7:26.62 set by Mohamed Mourhit in 18 August 2000).

“I want to test myself. If I see the results of the past three years, they always run about 7:30 or under, but I am trying to race rather than look at the times. It is possible to break the record but it depends on how the race goes.”

Farah won’t try the marathon again until the 2016 Olympics and will not quit track and concentrate in road events before the 2017 World Championships. Nevertheless, he would love to see the night Marathon “experiment” in 2019 in Doha paying off:

“If it is proved that night marathon is better for us in terms of climate and conditions, then why not. Athletics can be excited if we work together and build on it.”