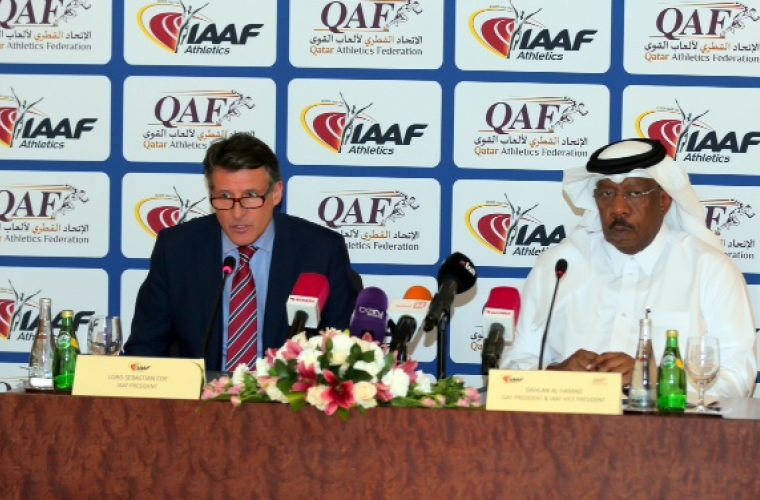 The press conference took place with the occasion of one month to go until the 7th Asian Indoor Championships.

“I came to Doha to meet with QAF officials upon the ongoing preparations for the IAAF 2019 World Championships. I will have the chance to visit the facilities and discuss about the planning for the 2019, an event which I strongly believe is going to raise the reputation of the sport regionally”, commented Lord Coe in his introduction speech.

Speaking about the recent scandals which have troubled IAAF, the President said that the investigations show that previously there was a failure in the governance of Athletics - this is why he has launched a 10-point plan for rebuilding the trust with the recommendation of the international anti-doping committees and their reports, which are going to be included when appropriate.

"From the moment that we were confronted by the police investigation into these allegations, I made it very, very clear to everybody within my organisation and within the council that we would be fully cooperative. "On the criminal investigation particularly, I have made it very clear that the sport needs to understand the full nature of these allegations, to bring this to a head as quickly as possible."And I do encourage every country, every federation to cooperate as fully as they can with the French investigation that is taking place,” said Lord Coe who learnt earlier in the day that Senegal ruled out extraditing Papa Massata Diack to France.

In his welcome speech, the QAF President Dahlan Al Hamad praised Lord Coe for his attitude amid crisis and for showing extreme determination to clear athletics of all past wrongdoing:

“Lord Sebastian Coe courageously and tirelessly represents the sport in the best possible way, fighting to secure the future of athletics. He has already started implementing a transparent way of governance. He faces a challenge no other President in the history of athletics has ever been against before. He shows unbelievable determination and will power to defend against all threats as well as to cut ties once and for all with all those who spoiled the sport’s reputation for their own profit.

“Thank you Mr. President for coming to Doha and for your support and please allow me to stress that with your valuable input, Qatar and Asian athletics will further develop and become key players in global track and field.”

For Lord Coe, athletics could re-establish its status in the international market only by reaching out to young generations:

“My vision is to engage more young people to the sport. The average age of those following athletics nowadays is 55! This is not sustainable. We want the youth to come and watch our stars. We need to establish younger audiences in the Middle East which is an economic powerhouse, a growing market.”

“Quite a few challenges lie ahead for QAF, starting from the 7th Asian Indoor Championships which is due to take place in Doha between February 19 and 21. I can personally attest that everyone involved for the success of the continent’s flagship indoor competition, which returns to Doha eight years after it was successfully hosted in the Aspire Dome in 2008, is tirelessly working extremely hard, day and night. The Organising Committee has done a tremendous job thus far, to ensure that the Championships will meet the highest international standards and criteria in order to present a unique, top-level event.”

“For QAF, the Asian Indoor Championships is only a stop en route to our ultimate cause, which is the 2019 World Championships. But first of all we have to deal with the challenge of the IAAF Diamond League, which is rated by IAAF and global media as a one of the best in the series, but we know that there is always room for improvement and our aim is to work even harder in order to remain at the top. In this direction and with our minds set on the 2019 World Championships, we have joined forces with the newly elected Qatar Olympic Committee (QOC) administration which has proved its potential in the recent internationally acclaimed 2015 Handball World Championship.”