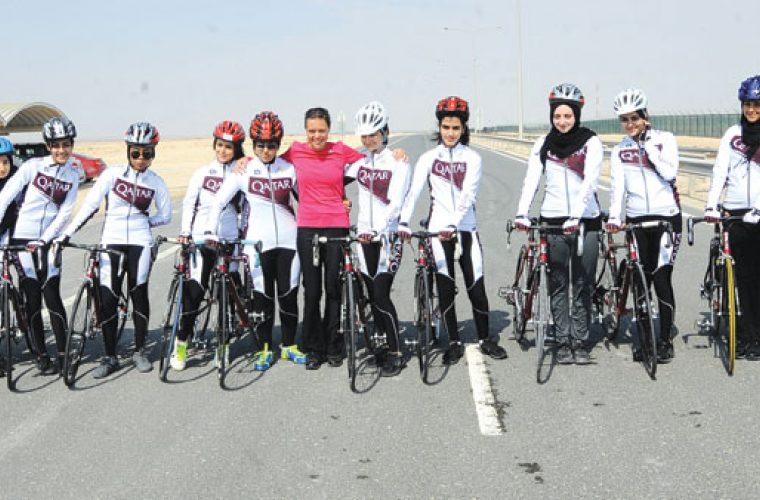 Hitec Product Chloe Hosking failed to capture the Ladies Tour of Qatar title last year, but she starts as a favourite this year.

Obviously, Hosking was not happy after she lost the race lead in the season-opening event last year courtesey a punctured tyre in the final kilometre of the third stage and had to settle for second overall behind Dutch star Kirsten Wild, but now she is keen to go more fiercely for the title battle which commences today at the Museum of Islamic Art.

“I love coming to Doha and win here. This is my fifth year. I am almost a veteran here. I’m excited to get the international season of racing underway with one of my favourite races,” Hosking said yesterday.

“Qatar has been a huge focus for me ever since I lost the lead in the third stage last year as I had a punctured tyre... But as we all know, such accidents do happen in cycling. Hopefully, there will be no puncture for me this time,” the Australian, who continues with Hitec Products in 2014, added.

Having already shown some early season form at the Mitchelton Bay Cycling Classic in January in Australia and the St Kilda Super Crit in December which she won, Chloe Hosking is aiming for the title here.

“It’s the most competitive field. It’s the toughest field I have ever seen for the tour, there are so many strong teams with potential winners,” she observed.

“I had a really good summer in Australia and have been able to use races like the Mitchelton Bay Cycling Classic as preparation. The team has just finished a 10-day training camp in Benidorm, Spain, where we got some really good specific preperations, so I’m hoping to try and improve on my result from last year,” the Olympian added.

As always, Team Argos-Shmano rider Kirsten Wild, who has won the maximum number of stages (6) in Qatar during her three (2009, 2010, 2013) title wins, will also make good use of her experience in the country to defend her title.

However, things will not be very easy for Wild and Hosking, as among the other title contenders are double world champion Italy’s Girgia Bronzini and her compatriot Eilen Van Dijk, who won the title in 2011 and in the process stopped Wild from making a hat-trick of wins here.

Many more top-level athletes from 12 professional teams and three national federations will make up the bunch covering a total distance of 388 kilometres.

Two years before the World Road Championships, which will take place in Qatar for the first time, the best cyclists in the international peloton will take advantage of the opportunity to tame the windy routes of the tour.

“It’s the toughest field I have ever seen in Qatar, there are so many strong teams with potential winners. Kirsten is very good as she won three titles here. We will be watching her very closely. Girgia is also a strong title contender,” Hosking said.

The Qatar race is known as one for the sprinters and is characterised by its windy and flat conditions which often lead to fast-forming echelons and even faster bunch finishes.

Hosking is stronger this time and is confident that she has the right team and set-up to finish at the top in the general classification.

“Wind is a major factor here, and I love the wind. This race favours my style of racing. We have come here with the right team. With the new riders Lauren Kitchen and Audrey Cordon we have really strengthened the squad. They have both experience and race knowledge. They are really good. This is our ‘sprint squad’. We are the Hitec Products,” the 23-year-old rider said.

Taking about her goals, the Australian rider said: “I am aiming for the 2016 Qatar World Road Championship and that is my big goal.”