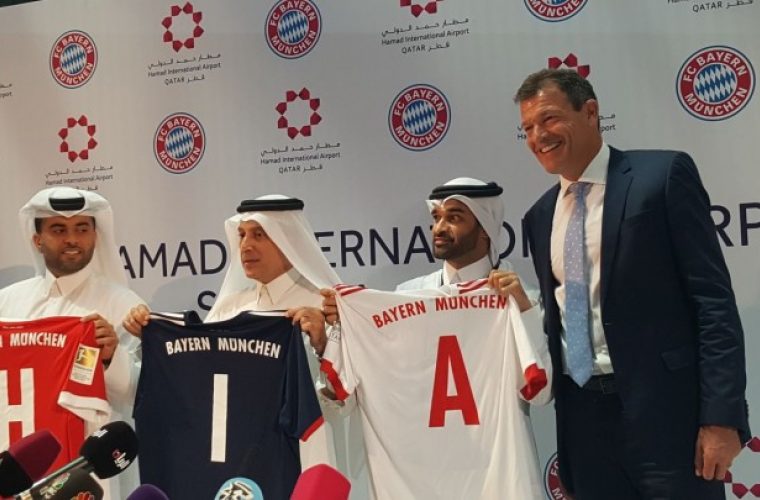 In breaking news announced today at a press conference held at Hamad International Airport (HIA), Qatar once again solidifies its spot on the world stage as a global leader in sport, with the enhancement of HIA’s current sponsorship of FC Bayern-Munich as Platinum sponsor. The latest FC Bayern Munich jersey with the HIA logo on the sleeve was also revealed to media.

Speaking to members of the press H.E. Mr. Al Baker stated: “The strengthening of this fantastic sponsorship between Qatar’s award-winning airport and FC Bayern-Munich, truly demonstrates the State of Qatar’s role as a global leader in sports. The HIA-Qatar logo on the sleeve of every FC Bayern Munich jersey helps display the importance that we as a nation place on sports as a means of bringing people together. The HIA-Qatar enhancement of its sponsorship has also further aligned itself with our nation’s ambitious national vision.”

“Starting this season, our players will feature the HIA logo on the jersey’s sleeves,” said FC Bayern Munich Executive Board Member Andreas Jung. “When we signed the contract with Hamad International Airport in January 2016, the sponsor’s badge on the sleeve was already part of our agreement. So far the HIA logo has already been placed on the training uniforms.”

What are your thoughts on this latest announcement? Are you an FC Bayern Munich fan? Drop us a line in the comments below and tell us your thoughts! Also, don’t forget to give us a like and a share – it keeps us going!