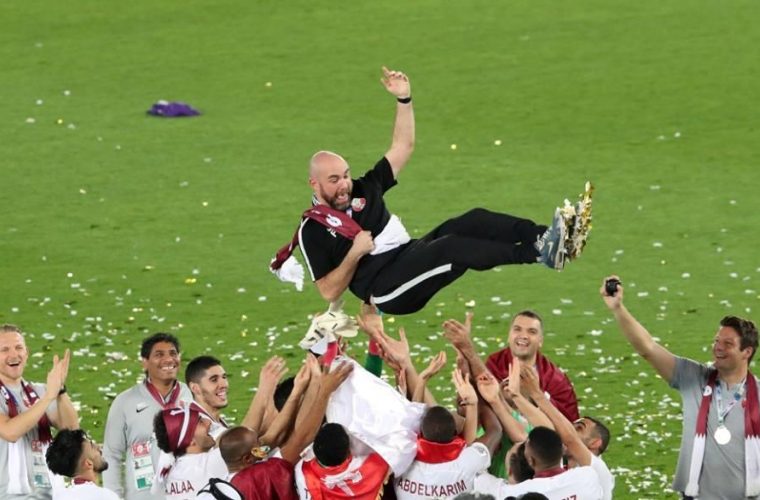 The country's national football team, who are now Asia's new kings of the most popular sport in the world after scoring 3-1 in a highly-anticipated match against Japan yesterday (February 1, 2019), won the hearts of many football fans across the globe not only with their splendid performance but also because of their carefully-thought reception of a hostile environment in the face of the ongoing GCC embargo against Qatar—while inside the vicinities of neighbouring UAE, which is among the Saudi-led coalition to declare war against the country that they're representing approximately 18 months ago.

The team's unwavering fighting spirit was very well seen during the seven matches which it all won but one guy, who goes by the name of Felix Sanchez Bas, isn't receiving the amount of credit that he deserves for a team well built and a game well fought.

A former Futbol Club Barcelona (FC Barcelona) youth coach, Sanchez moved to Qatar in 2006—the same year when he joined Aspire Academy. He was then appointed as manager of the Qatar under-19 side in 2013. Proud with his Spaniard roots, the 44-year-old is currently the coach of the winning team of the recently-concluded Asian Cup 2019 finals.

In one of our Facebook appreciation posts, a follower who seems to know the football coach too well has nothing but good words to say:

"This man has brought Qatar's national football team through the academy over the past decade and guided their every step to winning—well done!"

If you want to know the lesser-known roles that Sanchez played in order for Qatar's Asian Cup 2019 delegates to win all three group matches, make sure to scroll all the way down!

In fact, Sanchez is in charged with laying the foundations for producing teams that could compete with the likes of Japan, South Korea, Saudi Arabia and Australia in Asia with the aim of regularly qualifying for the FIFA World Cup.

Team Qatar's stellar form and performances are all credited, according to one of the boys, to Sanchez' "high pressure and intensity, miserly defending and knowing when to kill the game at the right time".

Besides this, Sanchez' "masterful planning and admirable control over the players" is also being admired by many football critics.

3. He was able to forecast, together with Xavi, his team's win!

To the delight of Sanchez, former Barcelona midfielder Xavier Hernández Creus (Xavi) correctly predicted that the 2022 World Cup hosts would win the 2019 Asian Cup. Now, the national team coach wants Xavi (who also happens to be his friend) to predict Team Qatar's upcoming games after the fresh win.

4. He said that the team had to suffer a lot before being declared champs

In an interview, Sanchez shared: "In the first half, we played very well. In the second half, we had to defend a lot because obviously, Japan wants to win the title as well. It was a very tough game. We suffered and we know how to suffer."

He concluded by saying that despite all the hurdles, it was a well-deserved win and that he's thankful and happy with all the support that the team is getting from the people of Qatar.

5. He fathered Qatar's boys to victory!

As mentioned in the earlier part of this article, Qatar's national football team members—who are mostly under the age of 25—technically grew up within Sanchez' care and tutelage, making them the champions that they are today.

In another interview, Sanchez shared his belief in the young players by saying that they "set a tune too difficult for any of their rivals to match in the games."

Sanchez had to experiment by axing some of the ageing players and introducing young bloods to begin delivering the goods. Qatar’s present 23-man Asian Cup team consists of 14 players who are 25 or under. The oldest in the Qatar squad is a 30-year-old with the rest not being more than 28.

Did this article give you a clearer overview of Felix Sanchez and the Qatar national football team? If yes, we'd love to hear from you! Comment below and don't forget to like and share this article—it keeps us going!