A short winter break has proved only to heighten interest, increase driver focus and build anticipation as the region’s leading race series speeds towards a long-awaited return to the UAE’s capital for Round 3 of the Porsche GT3 Cup Challenge Middle East.

In two weeks the Middle East’s most competitive drivers will return to the track in Abu Dhabi at the Yas Marina Circuit for the first time in over three years with two races scheduled on Friday 22nd January.

For some drivers the break since Round 2 at Saudi Arabia’s Al Reem Circuit in early December will have been a welcomed chance to reflect and recover from a grueling opening to Season 7. After a tough start to the season, Doha-based driver Charlie Frijns of Team Frijns Structural Steel Middle East, has had a chance to review his performance in the early rounds and set new goals for the season ahead. Thanks to some strong driving in the last round, Frijns came away from the technically challenging Saudi Arabia circuit with some vital team points which saw him climb to 7th in the overall driver’s standings. Now Team Frijns will be looking forward to getting back on track in 2016 with Abu Dhabi the perfect opportunity for Charlie to start closing the gap on 6th place Abdulaziz Al Faisal of Al Faisal racing.

“It’s been a tough start to the season for me and the standard of driving out on the track has been incredibly high. With a lot of these circuits it is extremely important to qualify in a strong position as it is very difficult to climb places on some of the tighter tracks and the defensive driving by the other teams doesn’t make it any easier. We have been working on a few things over the winter break and one of the main focuses going into the third round is to get myself into a strong position on the grid, and build from there. The Abu Dhabi track is an exciting one so it’s sure to be a great race!”

For racing fans in the UAE, the return of the spectacular Porsche GT3 Cup Challenge Middle East to the capital will serve as a timely reminder of the country’s domination so far this season with Jeffrey Schmidt’s Al Nabooda Racing Team occupying two of the three top spots in the standings. Schmidt who heads the overall championship by twelve points from his two consecutive round wins, is keen to replicate his invincible form from the start of the season as the action hits Abu Dhabi next weekend:

“I couldn’t have asked for a better way to wrap up 2015 with the win in Saudi Arabia. I’m pleased with my performances so far, but I remain focused on what is a big year ahead. To open another year of racing in Abu Dhabi is just perfect, and I hope that the excellent conditions at Yas Marina Circuit can help me unleash the best in me. I know that I’ve got more in the tank, and I’ve spent considerable time with the team over the break to assess every inch of my races so far this season – hopefully it will show!”

After two exhilarating first rounds of the new Porsche GT3 Cup Challenge Middle East season in Bahrain and Saudi Arabia, Al Nabooda Racing sit comfortably atop of the team standings as well, no doubt helped by the dynamic duo’s incredibly consistent performances. However, with the new series only midway through, anything can still happen – especially at the notoriously challenging Yas Marina Circuit, famed for hosting the annual Formula 1 Etihad Airways Abu Dhabi Grand Prix and for its unique turns and long straights which allows for plenty of overtaking opportunities.

Regarded as the purest form of racing with all drivers competing in identical fifth generation Porsche 911 GT3 Cups, the unique one-make series consists of 12 races between November 2015 and March 2016.

The Porsche GT3 Cup Challenge Middle East now heads to the UAE for three rounds in a row to kick start the New Year across January and February, closely followed by the return to Bahrain in early March which is set to be a thrilling end to series 7.

Round 3 takes place on Friday 22nd January at the Yas Marina Circuit in Abu Dhabi. 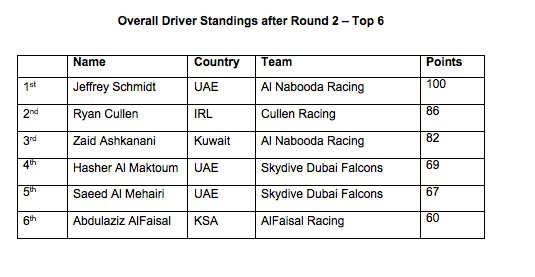