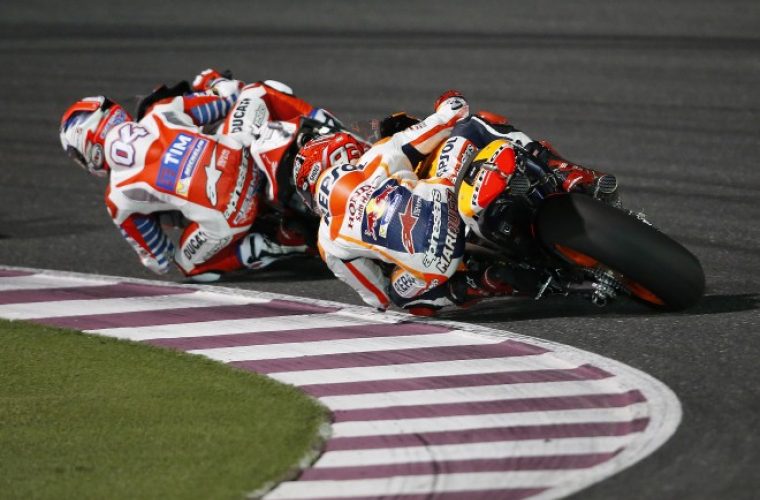 2016 was a history maker of nine different winners, Independent Team glory and another incredible Championship win for Repsol Honda Team’s Marc Marquez – despite what had seemed like an incredible hurdle to climb as preseason came to a close. But 2017 is the deepest grid ever, with ten World Champions sharing 29 titles between them - some gearing up to add to their legends, some wanting to start writing them – and an unbelievable total of 197 premier class victories shared by the class of 2017.

Last year was then, and this is now.

Preseason has given us some incredible indications of the season we have to look forward to. Stealing the headlines has been Movistar Yamaha MotoGP newcomer Maverick Viñales – who topped every test – as teammate Valentino Rossi seemed to struggle more to unlock the potential of the package, with a deficit to his teammate on the timesheets. Jorge Lorenzo (Ducati Team) has made huge leaps forward in red, “aero-fairings” have come calling as wings get banned, and there has been a rider shuffle across half the grid.

Rewind a year and Repsol Honda Team were facing down what looked like would be a tough season. This year, both reigning Champion Marc Marquez and teammate Dani Pedrosa have been much happier in preseason, despite some crashes for the rider from Cervera. Marquez’ record at Losail is good – two podiums and a win from four races in the premier class – but the Spaniard says the track is not suited to the Honda, and wrapped up the test in Qatar wanting to fight for the podium under the floodlights.

Teammate Pedrosa has had a tougher time at Losail, but the ‘Baby Samurai’ shone during testing throughout winter. With Viñales out front in every test, only one other rider has been in the top five overall at Sepang, Phillip Island and Losail – Pedrosa. After a tough start to 2016 followed by that stunning win in Misano, progress for the Spaniard is still very much an upward curve.

An upward curve is something mirrored by old nemesis Jorge Lorenzo. Teammate Andrea Dovizioso has concentrated on development and testing parts for the new campaign – with positive results – whilst Lorenzo has simply focused on adaptation. That has paid off, with the ‘Spartan’ moving up from well outside the top ten to complete the top four overall at the close of action in the #QatarTest. ‘DesmoDovi’ has a good podium record at Losail and the Desmosedici goes well at the venue – but Lorenzo is the king of the desert.

Six victories for the ‘Spartan’ – half of which have been in the premier class – make for good reading ahead of the season opener. Add Ducati’s recent record of podium success at the track and Lorenzo seems to have the chance to break a record in Qatar: only former teammate Valentino Rossi has ever won back-to-back premier class races with different manufacturers. Losail, for Lorenzo, may not just prove the start of a new era – it could be much more.

Rossi’s last win at Losail was in 2015 in a stunning season opener. After a difficult preseason, the ‘Doctor’ will be hoping for the hand to fall as it did on Day 2 of the Qatar Test, which saw the Italian shoot up the timesheets as track conditions were favourable. The timesheets aside, the rider from Tavullia is also a Sunday specialist – and always has been. Points are awarded on race day, and the veteran of the field knows that fact well.

Viñales is at the other end of the spectrum of experience. But with two seasons in the premier class under his belt and a full house of being the fastest man in testing, the young gun seems one to beat. On potential alone, the trophy has a name penciled on it. But whilst his pace on paper is ominous, it can be a different game as a title contender - one the 2016 Silverstone winner has not yet played.

Some of the others making a switch for 2017 are former Losail podium finisher Andrea Iannone and rookie Alex Rins at Team Suzuki Ecstar, Aleix Espargaro and rookie Sam Lowes at Aprilia Racing Team Gresini , and reigning Moto2™ Champion Johann Zarco and Jonas Folger at Monster Yamaha Tech 3 as the Independent Team take on two newcomers to the premier class.

Red Bull KTM Factory Racing are also ready to race, after a long period of testing and a huge amount of data gathered in preseason. The Austrian factory now look down the barrel of their first outing with Pol Espargaro and Bradley Smith as they line up full time – also becoming the only manufacturer to have a presence on each grid – MotoGP™, Moto2™ and Moto3™.

Moto2™ is another strong field once again in 2017, with a huge amount of competition ready to hit the gas in Qatar. Last year’s title contenders like Tom Lüthi (CarXpert Interwetten) and Franco Morbidelli (Estrella Galicia 0,0 Marc VDS) will be looking to get off to a flier first time out, as well as the guys who are looking to join that fight: Takaaki Nakagami (Idemitsu Honda Team Asia), Lorenzo Baldassarri (Forward Team) and 2014 Moto3™ World Champion Alex Marquez (Estrella Galicia 0,0 Marc VDS). 25 points per race starts at Losail, regardless of the pressure that amps up throughout the season.

Bagnaia is joined by Stefano Manzi at the new Sky Racing Team VR46 intermediate class outfit as they debut in Moto2™, with another debutant ready to share pitlane with the Italians: KTM. The new chassis for Red Bull KTM Ajo sees the Austrian manufacturer now have a presence in each class – and Miguel Oliveira has been impressive in testing, with the bike seeming a real contender. With more Suter presence with Kiefer Racing and Dynavolt Intact GP, too, the competition is sure to be tight.

The battle to replace the king of recent seasons begins - the crown now up for grabs as reigning Champion Johann Zarco vacates his throne.

Moto3™ gear up to storm the desert

With Brad Binder gone to Moto2™, there will be a new Champion in the lightweight class in 2017 – and the impressive rookies of 2016 are sure to be some of the first to get in gear when the lights go out in Qatar. Rookie of the Year Joan Mir (Leopard Racing) and podium finishers Nicolo Bulega (Sky Racing Team VR46), Bo Bendsneyder (Red Bull KTM Ajo), and Aron Canet (Estrella Galicia 0,0) are now sophomores spoiling for a fight – as well as Fabio Di Giannantonio (Del Conca Gresini Moto3), as the Italian comes back from a collarbone break in preseason.

What of the more experienced? Jorge Martin (Del Conca Gresini Moto3), John McPhee (British Talent Team), Gabriel Rodrigo and Juanfran Guevara (RBA Racing Team) could all be big forces to be reckoned with – alongside three of the biggest names expected to challenge for the title this season:

Niccolo Antonelli is a race winner with proven speed, now joining Championship veterans Red Bull KTM Ajo to replace Brad Binder. A tall order, and one shared by the man stepping into the EG0,0 seat vacated by Jorge Navarro – “Bestia” Enea Bastianini. Bastianini was a big contender in 2016, with Antonelli a little further back in the fight – but the clock is now reset.

Reset is the goal for the returning Romano Fenati, as he makes a comeback back to the grid with Marinelli Rivacold Snipers. Fenati, who has been a threat at the front since his debut in Moto3™, will surely have the pace – with the goal now to add the consistency and string together a real challenge for the crown.