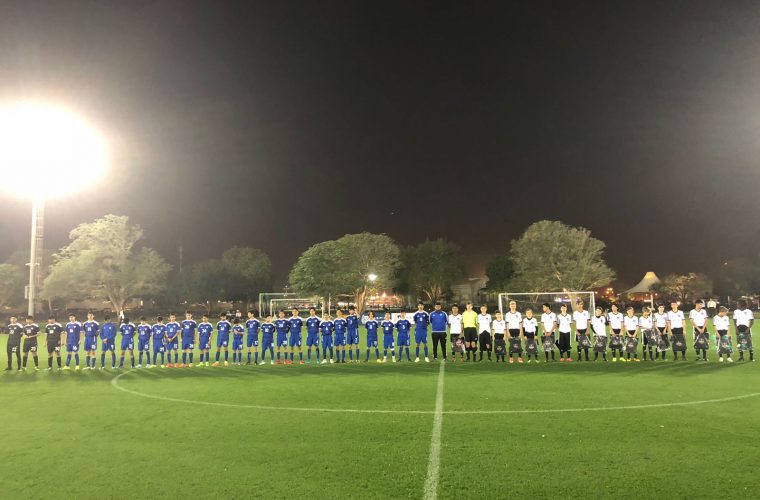 On Sunday 15th January, the Evo Under 14 Academy competed against the Kuwait U14 National Team in a friendly game at Aspire Academy.

For the first time in its 10-year history, an Evo Academy team played its very first international friendly. “All the players were really excited when they arrived for the match. This was a fantastic occasion for the whole club and the players were focused on making everyone proud,” said Operations Manager Tom Marsh.

Despite the tough opposition, from the first minute the Under 14 Academy tried to impose their brand of football. It was a tight first half with neither side creating too many chances. It was towards the end of the first half that the Kuwait National team took a rare opportunity to take a 1-0 lead. This came minutes after the Under 14 Academy had their own chance to score what would have been a fabulous team goal.

It was in the second half where the Kuwait national team started to dominate possession. During this period, the Kuwait Under 14’s made it 2-0 with the goal coming from a well-worked corner. In spite of the challenge now facing the Academy, the team did not go into their shell. Through a combination of hard work and determination, the Academy got their goal from a neat Davi Cruz finish. A huge roar from the crowd erupted as the goal went in.

With ten minutes to go, legs began to tire. The Evolution Soccer Academy had given everything for the entirety of the match. The final score finished 3-1 to the Kuwait National team.

After the match, Academy Manager David Wallace said, “You could not fault the players effort and commitment this evening. During large periods of the match, they played some wonderful football and everyone at the club should be proud of what they achieved today. I would like to thank the Kuwait FA for setting up this match. It was a pleasure to play such a wonderful team and meet a great group of coaches. I would also like to thank Megarme, our sponsor. It’s through their support we are able to make events like tonight possible.”