El Jaish lifted the Qatar Cup for the second time 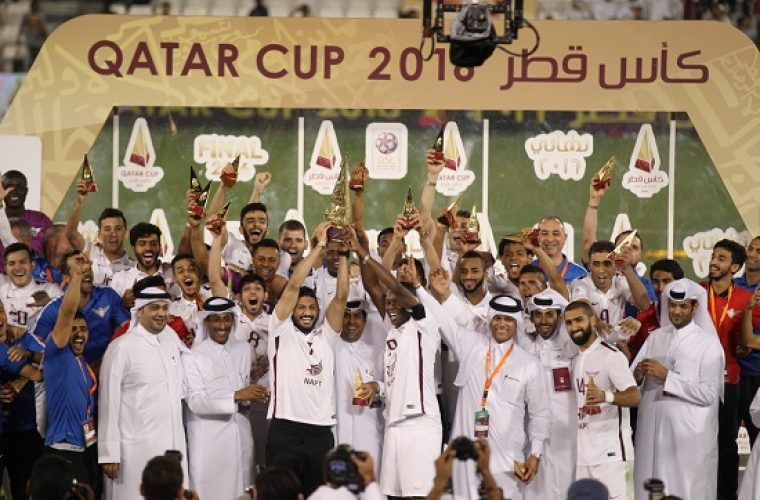 Al Rayyan where undoubtedly the stars of this year’s QSL season, newly appointed Coach Jorge Fossati lead his side to 20 wins during the season, only dropping points in six games. Talismanic captain Rodrigo Tabata led his side by example notching an impressive 21 goals this term.

The Lions comfortably qualified for the Qatar Cup after their stellar league form. Many expected Jorge Fossati’s side to go all the way and lift their first ever Qatar Cup. El Jaish registered their joint highest ever finish in the QSL, finishing in second place. Sabri Lamouchi’s side enjoyed a consistent season in the top 4, and has had the formidable attacking trio of Romarinho, Rashidov and Hamdullah.

Jaish went into the Qatar Cup in confident form, boosted by impressive displays in the AFC Champions League. Crucially history was on Sabri Lamouchi’s side going into the end of season competition, Jaish have always been in the final of the Qatar Cup since the competition was rebranded three years ago.

As for Al Sadd they welcomed Spanish superstar Xavi to their ranks in the summer. The newly appointed Saad skipper capped his debut with the first of many assists this season, as the Wolves ran out 4-0 winners against new boys Meisameer. A change of coach at the start of December saw Jesaldo Ferriera take the hot seat.

The Portuguese coach brought stability to the club allowing the Wolves to qualify for the Qatar Cup. Hopes were high in the Al Sadd camp that resurgence in form could lead to Qatar Cup glory. Former champions Lekhwiya slumped to fourth place in the QSL standings.However the Red Knights did qualify for the Qatar Cup competition with a few weeks to spare in the league, holding off a late surge from fifth placed Umm Salal.

The Red Knights put on a tactical masterclass in their 3-1 victory against Al Rayyan, a side who they lost to on both occasions during the QSL season. Djamel Belmadi set out a defensive side, with one recognized striker.

However Lekhwiya where masterful on the break, putting the current QSL champions to the sword with three goals of superior quality, Al Rayyan grabbed a consolation though defender Nathan. The second semifinal saw El Jaish faceoff against Al Sadd with a chance to meet Lekhwiya in the Qatar Cup on the line. El Jaish progressed to the Qatar Cup final with a 3-2 victory over Al Sadd, whom they pipped to second place in the QSL standings.

Jaish’s attacking trio of Hamdullah, Romarinho and Rashidov linked together on the night and all three players had a hand in the Jaish goals. Whilst the Jaish backline weathered a late comeback from Al Sadd to set up a third straight final against Lekhwiya.

The scene was set for a showpiece Qatar Cup Final between Lekhwiya and El Jaish. The match certainly delivered with last minute drama and high quality football. Jaish took an early lead courtesy of a Mohammed Methnani header on the 30th minute.

In the second half Lekhwiya found their way back into contention with an Alain Dioko penalty after defender Khalif Muftah was cut down in the penalty area. Despite Djamel Belmadi’s side being in the ascendency, it was Jaish who delivered the killer blow in the final minutes of the match.

Midfielder Magid Mohammed was scythed down in the box and the referee pointed to the spot. Up stepped Jaish’s top scorer Abdulrazak Hamdullah to calmly convert the spot kick and ensured Jaish lifted the Qatar Cup for the second time in their history.