EFG Sailing Arabia – the Tour reigning champions Team EFG Bank Monaco have confirmed they will be back in 2016 with sights keenly set on ‘the treble’ when the new look 2016 One Design race, once more sponsored by EFG, gets underway in Dubai next month.

The teams are expected to reach Qatari shores after a gruelling two-day straight sail up the Arabian coast on February 20th when the boats arrive into Doha. The teams will then take part in an action-packed inport race on February 21st before setting off to Oman.

SATT champions for the past two years, EFG Bank Monaco will start the five leg 750 nm challenge as favourites to win again and skipper Sidney Gavignet, veteran of five Sailing Arabia editions and one of the most accomplished offshore skippers in the world, has assembled a new team who he believes has what it takes to make it three in a row.

Key to this success is Fabian Delahaye, the French navigator who recently competed in the Transat Jacques Vabre with Jean Pierre Dick. A specialist in coastal racing with two Tour de France a Voile campaigns to his name, he was a member of Gavignet’s winning crew in 2014 and again last year.

All the other crewmembers are new to EFG Bank Monaco and some are new to EFG Sailing Arabia, including Frenchman Guillaume le Brec and Alan Roberts, one of Britain’s rising solo stars who earlier this year finished 9th in the punishing Solitaire du Figaro, the best result for a British skipper in the last 40 years.

Frenchman Thierry Douillard, like skipper Gavignet, is renowned on both the monohull and multihull circuits with coveted Tour de France a Voile (2015) and World Match Racing (2006) crowns under his belt as well as an Extreme Sailing Series season with SAP Extreme Sailing Team and a variety of ORMA and MOD70 campaigns.

Denis Bouan might be a new name in professional sailing circles but in France he is a motorcycling legend having won the Tour de France Moto, now known as the Dark Dogo Moto Tour eight times. He has been sailing for two years and is passionate having raced on Oman Sail’s MOD70 Musandam-Oman Sail with Gavignet and his team.

Raad Al Hadi is a sailing instructor at Oman Sail’s Al Mouj Sailing School, one of four schools across the Sultanate that have helped nurture a passion and talent for sailing among Omani nationals. He took part in The Tour in 2012 with Team Renaissance, scoring a fifth place overall and won third place in the Muscat Khasab Regatta with Team Renaissance shortly after. Al Hadi is best known for being part of the Extreme Sailing Series in 2011 as a backup sailor for The Wave, Muscat team.

“After winning in 2014 and 2015, we want to make it three in a row so I have put together a very good team to do just that,” said Gavignet of his new crew.

“This race keeps on getting better and continues to grow in reputation year on year. Last year, there was a real step up in performances across the fleet and it was followed up with a detailed consultation among the organisers and the sailors to see how the route could be improved. They listened to the sailors and came up with this new route which we think will be neither easier nor harder but very different and therefore more interesting.

“In particular, the 200nms leg from Qatar to Oman is going to be long and pretty tough. It will take more than two days which is the longest leg we have done in the SATT and that makes it interesting.

“There is also an inshore race at the start in Dubai before we set off on the first leg to Abu Dhabi which is a great way to start the event off because everyone will be going out to put first points on the board and that will include us.”

EFG Bank Monaco will line up against 11 other identical Farr 30s representing crews from Kuwait, the Netherlands, Oman and Switzerland, of varying levels of experience from complete novices to experienced offshore veterans.

Confirmation of their entry coincided with the announcement that EFG, the global private banking group which operates in around 30 locations worldwide, has renewed its agreement to sponsor the race for the fourth consecutive year. EFG Bank Monaco was named to reflect the “EFG Bank Sailing Academy” partnership with the Monaco Yacht club. Keith Gapp, EFG International commented: “EFG Sailing Arabia – The Tour is an event we are very proud to sponsor, firstly because it is unique in Arabia and also because it excites so much passion among the competitors and the entire EFG sailing family. We have built a reputation as the private bank for sailing and this race is the perfect opportunity to position our brand in the region”.

EFG Sailing Arabia – The Tour was established in 2011 as an opportunity for both professional and amateur racing teams to sustain their training and competition programmes over the winter months and showcase the GCC region as a sailing and sporting destination through the extensive global media coverage of the event. “Oman Sail has worked hard since 2011 to build EFG Sailing Arabia – The Tour into an important event which has become highly regarded not only as the GCC’s premium offshore challenge but as a stern test for professional and amateur sailors from further afield and an introduction to the region as the ideal sailing destination. We look forward to building it further and thank our backers, especially our title sponsors EFG for their continued enthusiasm,” said Salma Al Hashmi, Director of Events and Marketing at Oman Sail.

Over the past five years this exposure and the resulting interest in the region has presented commercial sponsors with new investment and promotional opportunities and contributed towards the thriving marine tourism industry.

The sixth edition will start with an inshore race in Dubai, followed by the first leg to Abu Dhabi where two further inshore contests will be staged before the fleets heads off on a tricky marathon second leg to Doha, then the most demanding leg of them all, the 200 nms passage from Doha to new destination Khasab, Oman's northernmost Governorate which will be a test of skill and patience.

From Khasab, they will race back out into the Straits of Hormuz, round the Musandam Peninsula and down the coast of Oman to Sohar, the final stopover before the fifth and final leg to Al Mouj in Muscat, which presents a double points opportunity to seal victory or overhaul the leaderboard. 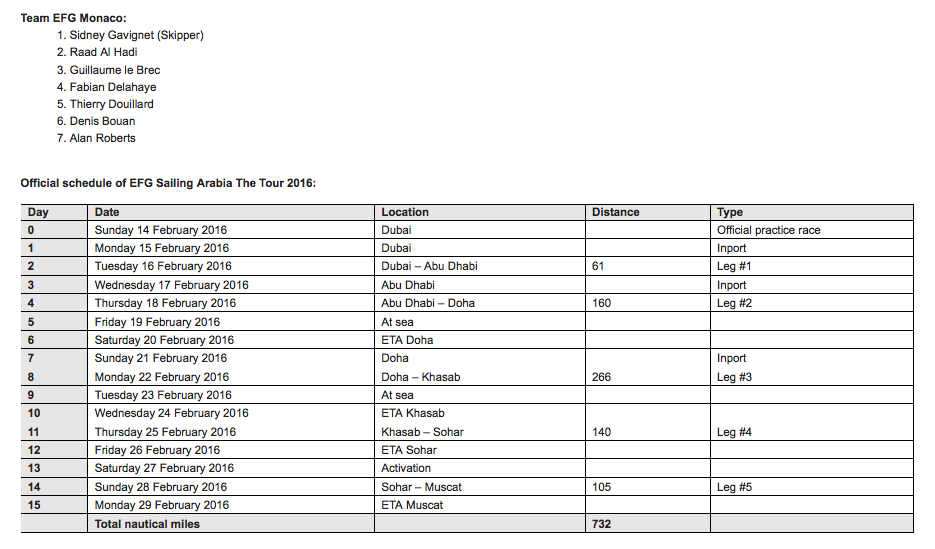 More information can be found on the dedicated website: www.sailingarabiathetour.com