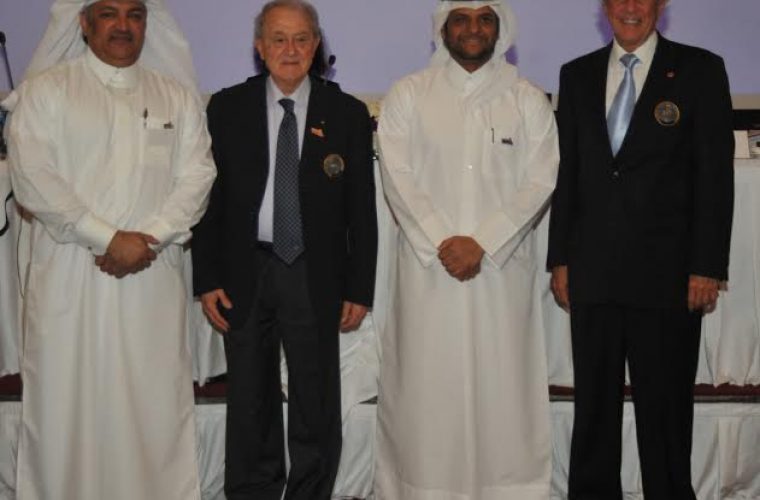 This latest sporting success for Qatar saw a delegation of senior officials from the Qatar Olympic Committee and Qatar Gymnastics Federation lead by Sheikh Saoud Bin Abdulrahman Al-Thani, Secretary General of the Qatar Olympic Committee and Ali Al Hitmi, President of the Qatar Gymnastics Federation, overcome rival bids from two European candidate cities in Switzerland and the Netherlands in the final round of bidding with the vote and decision taking place in Kuwait.

Having impressed members of the FIG Executive Committee with a comprehensive bid offer, the prestigious win will see Qatar welcome the FIG Artistic Gymnastics World Championships for the first time in the nation’s history, adding further its proud record and reputation as a successful host of major international sporting events.

The delegation delivered a compelling presentation to reflect Qatar’s sporting heritage, youthful nation, outstanding modern infrastructure and growing emergence in Gymnastics and included a passionate plea to bring the championships to the Middle East by talented 18 year old Qatari Shaden Wahdan. The most successful artistic gymnast at the Arab Games Doha 2011 and reigning national senior female title holder stressed the immense potential the championship has to reach out and inspire a new generation of gymnasts across the Middle East.

Commenting on why Doha was selected Prof. Bruno Grandi – President of the FIG said:

“I do look forward to being in Doha in 2018. I congratulate my friends and all those who contributed to the success of this bid, in particular the National Olympic Committee. Gymnastics will be at home in Qatar!”

“It is a great honour for Qatar to be granted the opportunity to host the 48th FIG Artistic Gymnastics World Championships in Doha in 2018. I’d like to thank the International Gymnastics Federation (FIG) for the trust their members have shown in Qatar and their confidence in our abilities to stage such a highly prestigious global event.

“Already we are looking forward to warmly welcoming the finest artistic gymnasts in the world to Doha in 2018 and hosting a truly memorable World Championships that is delivered to the highest possible standards. Qatar has strong foundations and commitment to Gymnastics through our successful Schools Olympic Program but hosting the World Championships in 2018 has the potential to open up the sport even further and inspire a new generation.”

The winning bid was based upon an ‘all in one’ concept with Doha ready to host the championships at renowned and state of the art Aspire Zone. Competitors, officials and spectators can look forward to enjoying the convenience and comfort of world-class facilities throughout the competition arena, accommodation and expert medical services for elite athletes courtesy of Aspetar.

Established in 2000 the Qatar Gymnastics Federation has quickly made steady progress towards its development goals for the sport. Already a successful host of seven editions of the FIG World Challenge Cup, Qatar has now captured the very highest level of the sport.

“As we look ahead the planning is already underway to ensure the worlds’ best gymnasts are given every opportunity to put on inspiring performances and live their world championships dream in Doha. The entire Gymnastics family across all international federations will all be made to feel very welcome.”

The 48th edition of the FIG Artistic Gymnastics World Championships, are expected to be staged within the Aspire Zone, Doha, Qatar between the 18th -27th October 2018.