Doha 2015 ready for first bouts as official draw is complete 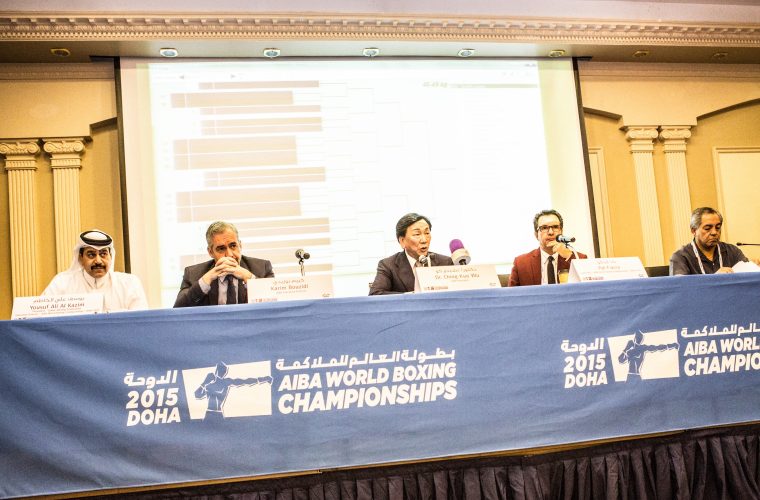 The official draw has taken place for the Doha 2015 AIBA World Boxing Championships, with 258 boxers from 74 countries having successfully made weight requirements and being paired up for the first bouts in the preliminary rounds starting tomorrow at the Ali Bin Hamad Al Attiyah Arena.

DOHA, 5 OCTOBER 2015: The Ezdan Hotel in downtown Doha was filled with excitement today, as hundreds of athletes in colorful national tracksuits were waiting to see who their opponent would be in the first bouts. The draw was presided by Dr. Ching-Kuo Wu, President of the International Boxing Association (AIBA), and orchestrated by Pat Fiacco, Supervisor for the first-ever World Boxing Championships held in the Middle East.

The boxers were selected for bouts in 10 different weight categories ranging from 49 kilograms to 91+ kilograms. As per AIBA rules, only the top-ranked boxers from each of the five continental confederations were seeded, thus adding to the excitement and drama with the rest of the bouts being picked by random and the luck of the draw. Considering that these are the first World Championships in history where boxers have had to qualify, it promises to be the most competitive edition to date with only the best of the best ready for the action at Al Sadd’s Ali Bin Hamad Al Attiyah Arena.

“This is really a once-in-a-lifetime opportunity to witness the best boxers on the planet go head to head here in Doha. It will be a great sporting spectacle, fun and engaging for all the family. I encourage all sports fans to come to the arena and witness history in the making. It will be an unforgettable experience, and we can’t wait to welcome fans from all over the world supporting their local boxing heroes, Dr. Thani al-Kuwari, Secretary General of the Qatar Olympic Committee, and CEO of the Local Organizing Committee, said.

For Team Qatar, the World Championships will be the biggest stage on which they have ever performed. The team’s captain and reigning GCC Boxing Champion, 34-year-old Abdullatef Sadiq from Doha, is thrilled to be able to fight in front of his own people: “Every day I have dreamt of boxing at this level here in Qatar, and I can’t believe that it’s finally going to be reality. I’m still pinching myself,” the 60 kilo featherweight boxer.

Sadiq will face Venezuela’s Luis Cabrera in his first bout, while in the welterweight category Thulasi Tharaumalingam were drawn against Kagiso Bagwasi from Botswana and Hzam Nabah got Argentina’s Alberto Palmetta. Alhadi Abdulrahman, the Qatari middle weight boxer, also faces South American opposition in the name of Endry Saavedra Pinto from Venezuela. As for light heavy, Hakan Murst Nuraydin will do well to overcome Dzemal Bosnjak from Bosnia and Hercegovina.

President of the Qatar Boxing Federation and Executive Director LOG, Yousuf Ali Al Kazim said: “Already the excitement is really building especially now the draw is complete as now the world-class boxers know exactly who they will face in the opening rounds. The boxers are ready, the venue is ready and Qatar is ready. The stage is set for our sport and our nation to unite with the opening ceremony taking place all ahead of the first bouts which take place tomorrow from 2pm. I hope as many fans of sport will come to enjoy the special atmosphere at the magnificent Ali Bin Hamed Al Attiyah Arena. It’s a unique opportunity to see this noble art up close performed by the greatest athletes in their sport.”

In the preliminary rounds there is a vast array of boxers from nations with strong expat communities across Doha. Egypt’s Hussein Bakr Abdin Hosam, the reigning African welterweight champion, is through to the next preliminary round on Thursday afternoon because of his strong seeding. Another top-seed, Mohammed Flissi, the flyweight favorite from Algeria who got a silver medal in the last World Championships in 2013, will have his first bout on Friday evening with his opponent coming either from Armenia or Papa New Guinea.

The local Filipino community, no doubt boosted by the news of Manny Pacquaio’s arrival to Doha on Thursday, have one athlete to look out for tomorrow afternoon. Rogen Ladon, a silver medalist from the Southeast-Asian Games in June, will be up against Argentina’s Leandro Blanc in the light flyweight category, where he will be hoping to do both his idol and country proud.

India, meanwhile, have a solid squad in Doha, with six boxers ranging from light flyweight to super heavyweight. Two of the team members, the 56 kilogram Shiva Thapa and Krishan Vikas will be facing Khalil Litm from Algeria and Zoltan Harcsa from Hungary respectively, tomorrow afternoon. Later in the evening, Devendro Laishram is set to meet Britain’s Harvey Horn in the light flyweight category.

Another British Boxer, and a heads-on favorite for the World superheavy weight title, is Joseph Joyce. He will however not compete until the next preliminary round on Friday night as a result of being top seed. It will still be tough tough for Joyce tough, as his next opponent is likely to be Morocco’s hard-hitting Mohammed Arjaoui.

One of Joyce’s strongest competitors and reigning world champion, Azerbaijan’s Magomedrasul Majidov, has had to pull out of the Worlds due to a recent facial operation – a boost in Britain’s chase for their first gold medal since 2007.

Cuba, the most successful boxing nation in history, have come to Doha with the largest squad in the championship are hungry for more world titles. The reigning world champions Lázaro Alvarez (60 kg) and Julio César la Cruz (81 kg) both went straight through to the next round, and will not be in the ring until Friday night.

The other defending world champions from different countries are all seeded, and will also be competing from the quarter-final stage in world boxing’s signature event between 5-15 October.

For the full draw and timings, please see www.boxing2015.qa. Tickets can be purchased online at virgintickets.qa, in Virgin Megastores in Villaggio and Landmark Malls, as well as the Ali Bin Hamad Al Attiyah Arena throughout the World Championships.