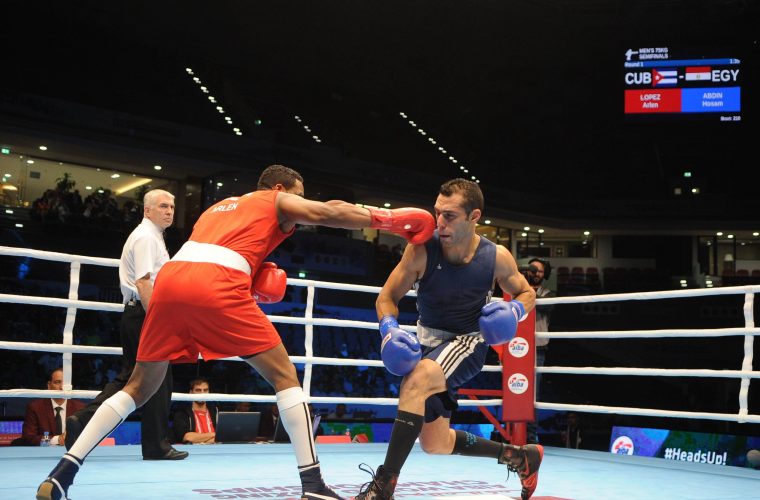 Coveted spots in the finals, Olympic places and World Championship titles up for grabs as the tournament moves closer to a climax

DOHA, 11 OCTOBER 2015: Following five days and 203 bouts since the start of the 2015 AIBA World Championships in Doha, 40 boxers from 18 countries entered the semi-final stage with their dreams of being crowned World Champion still alive. Among the semi-finalists are seven boxers from the Cuba, six from Uzbekistan, three Irish and two Chinese. And three defending champions, showing the global nature of the sport.

Today’s first of two days of semi-finals was once again a wonderful showcase of boxing. The skillful action in the ring was complimented by the passion and colours of fans from around the world and local community who flocked to the Ali Bin Hamad Al Attiyah Arena. Flags, Drums, Horns and even Mexican waves have provided an electrifying backdrop for the semi-final stage with World Championship titles and places at the Rio 2016 Olympic Games at stake.

“When we won the bid to host the AIBA World Boxing Championships, it was our vision to make Doha 2015 a celebration of the boxing sport. We wanted to gather local communities to support their heroes, and make the sport come alive across the Middle East. As is widely established, it is the first-ever World Championships held in this region, and so far I must say that it is succeeding.

“In order to get there we wanted to do something special, alongside AIBA we invited boxing superstars like Manny Pacquaio and Amir Khan to grace these World Championships. They have met boxing fans and athletes alike, and engaged in inspirational activities with children. Yesterday, for example, we had Khan in the fanzone with hundreds of children, and it was amazing to see how much it means to the next generation of boxers to get close and personal with their idols. These moments are what sport is all about: joy, inspiration, health and wellbeing.”

Rogen Ladon of the Philippines had proved himself as a crowd favourite as he stepped into the ring to face the 2015 EUBC European Confederation Boxing Russian light flyweight Vasilii Egorov but unfortunately lost the bout convincingly with a unanimous decision.

Shiva Tapa, the only boxer left representing India managed to overcome Team Qatar’s Hakan Ersaker in the Quarter-Finals to earn himself a place here today. The aggressive Tapa was up against Murodjon Akhmadaliev the hard hitting Uzbeck boxer who recently beat Shiva in the 2015 ASBC Asian Confederation Boxing Championships but for the Indian suffered the same result. Tapa said:

“I felt that I was the clear winner, it is always nice when you hear people saying that you should have won, but the reality is that I didn’t. I did my best in the competition and I am proud to represent my country here in Doha, I look forward to compete in the Olympics next year and will come back stronger.”

In the first of the men’s bantam weight, Ireland’s Michael Conlan, one of Europe’s most successful fighters in recent years winning bronze at the London 2012 Olympic Games had already achieved a personal best here in Doha after reaching the AIBA World Championships quarter-finals twice before in 2011 and 2013. Conlan was up against the tall Belarusian talent Dzmitry Asanau who has three gold medals to his name already in 2015 but secured a comfortable win.

Conlan said: “I am happy but my job is not done here yet, I am happy with what I did tonight, he was a technical boxer and I can adapt to fight that way a swell. In the next round I will be fighting Akhmadaliev from Uzbekistan, he is a very tough and powerful boxer. It will either be a boxing match or a war.”

In the men’s light welterweight Semi-Final and one of the most anticipated bouts of the day was world number one in the weight Cuban Yasniel Toledo. Toledo a fully formed as a world class fighter, stepped into the ring with Vitaly Dunaytsev the current European Confederation champion but it was Dunaystev who caused and upset and marched into the final.

Regional interest lay with Hosam Abdin in the men’s middleweight Semi-Finals representing Egypt. A crowd favourite with strong local fan base, took on the strong and powerful Cuban Arlen Lopez but despite a tremendous effort Abdin was defeated. Abdin said:

“It was a great achievement for me to get to this stage, it was a very close fight and I felt I did all I could do against a very strong opponent. It is a personal best for me to get this far in the World Championships and I am proud to have qualified for the Olympics.

“The Egyptian fans here are amazing, their cheering and support motivates me inside the ring, tonight I heard drums being played and my name being chanted, this is very important to me and I hope I make the people of my country proud.”

Monday will be another highly anticipated day of elite boxing at the Ali Bin Hamad Al Attiyah Arena, with another set of Semi-Finals starting from 7pm.