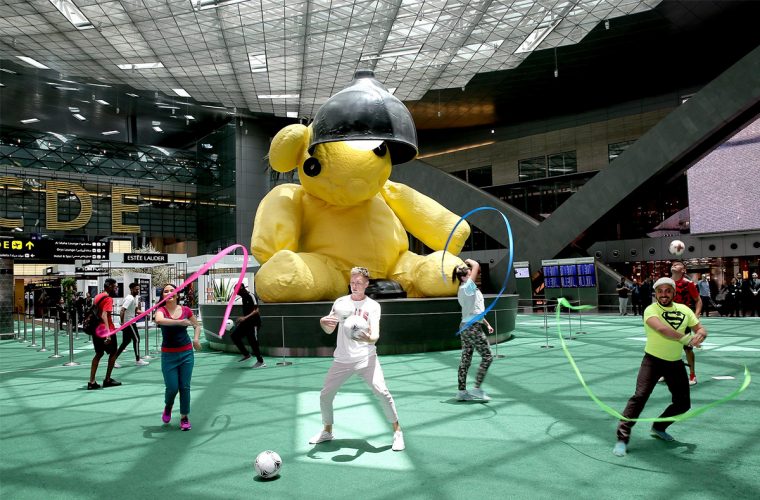 The 2018 FIFA World Cup Russia™ is kicking off tonight and football fans in Qatar are in for a treat. With a number of fan zones being set up all over Doha, Qatar’s football passion is about to reach fever pitch. Fans will be able to watch the matches (for match schedule, click here) on giant screens around Doha and participate in a number of different activities related to the game.

Football fans are in for a spectacular and unique experience at Qatar’s iconic Khalifa International Stadium, as Aspire Zone Foundation (AZF) prepares to host the country’s biggest Fan Zone area for those keen to watch the world’s biggest sporting event, the 2018 FIFA World Cup Russia™, starting on June 14 with the final being played on July 15. Only evening matches that begin at 6pm and 9pm will be shown on the screens during the group stages.

The Fan Zone will seat more than 1,000 people and will be equipped with the latest cooling technologies, a giant LED screen to watch the games, food and beverage stalls, a children’s play zone and car parking that’s convenient and easy to access. Fans will also get a sneak peek of what it will be like to experience a World Cup match at one of Qatar’s cutting-edge and technologically advanced stadiums at the 2022 FIFA World Cup Qatar™.

That’s not all! Football fans now have the option to choose their desired seating to watch the matches because AZF has a range of different options depending on what the fans want - private partitions for those wanting privacy, 24 Majlis - a traditional Arabic seating area where guests are received - partitions and 18 private skyboxes for those who want to watch the matches in style, and areas with dining facilities.

Another highlight of the fan zone is the Fan Zone Big Stars which will feature a legends league with a number of top football stars parallel to the World Cup in Russia. These big names are:

Football fans visiting the fan zone will also get to enjoy a number of freestylers will perform and showcase their football skills to amaze them and mesmerize them.

Fans can buy their tickets through Q-tickets or from a ticket booth set up at the main entrance of the stadium. All Ticket buyers will be enrolled in a raffle for a chance to win a car.

The Qatar Tourism Authority, the Ministry of Culture and Sports, and the Supreme Committee for Delivery & Legacy have teamed up to bring football fans in Qatar an exciting and fun-filled fan zone at the Ali Bin Hamad Al Attiyah Arena to watch 2018 FIFA World Cup Russia™ matches and support their favourite teams.

This football zone is one of the main features of the fifth Qatar Summer Festival. It will showcase the World Cup matches live and give football fans a feeling of the environment they will enjoy when Qatar hosts the World Cup in 2022. Football fans visiting this fan zone will also get to enjoy the fun family-friendly entertainment, foot-ball-related activities and appetizing food on offer at the venue.

The Ali Bin Hamad Al Attiyah Arena is one of Qatar’s main multi-purpose indoor sports venues. It was built to host the World Men's Handball Championship in 2015 and is home of the Al Sadd Sports Club. Conveniently located within the city, this arena can seat an audience of 7,700 and stands out for its modern infrastructure, oval shape and top-of-the-line facilities.

In celebration of the World Cup, HIA has been transformed to ensure that the thousands of passengers travelling through it, whether on transit or leaving the airport for their holiday destinations, never miss a moment of the excitement. The iconic Lamp Bear area of HIA has been transformed to resemble a football pitch which will feature games and activities for passengers who are waiting for their flights.

The matches will be broadcast live at the airport in three beautifully themed viewing areas in concourses A, B and C, as well as in Qatar Duty Free’s (QDF) Marché restaurant, where fans can watch the matches while enjoying a meal. These viewing areas are strategically spread across the terminal so viewers are close to their boarding gates and have been designed to resemble a living room, a stadium and a majlis. The themes have been carefully selected to ensure passengers are fully immersed in the viewing experience and get a taste of what to expect when Qatar hosts the world’s biggest sporting event in 2022.

Official 2018 World Cup memorabilia will also be on sale at QDF’s stores throughout the airport and shoppers will have the opportunity to take selfies alongside the 2018 World Cup mascot.

The entire airport terminal will come alive throughout the World Cup with roaming entertainment such as football freestylers, football jugglers and impromptu football matches around the airport. Over the next few weeks, passengers will also see pop-up activations including foosball games and virtual football and fans can have their faces painted with the flag of the country they are supporting.

Mall of Qatar invites all football fans to experience the excitement of every World Cup match live on the giant LED screens at the Ooredoo Oasis Stage, all while looking forward to 2022. Mall visitors can watch every goal and see history in the making whilst cheering on their favourite teams, as they enjoy a meal with family or friends at one of the numerous restaurants and cafes in the Oasis on the ground or first floor, or while they shop at their favourite brands.

A dedicated kids soccer zone will entertain children daily from 1pm to 10pm with face painting, a PlayStation area, creative workshops and more.

For more places where you can watch the 2018 FIFA World Cup Russia™, click here.

Are you a football fan? Which team are you supporting? Will you visit the fan zones and cheer on your favourite World Cup Team? Do let us know in the comments section.