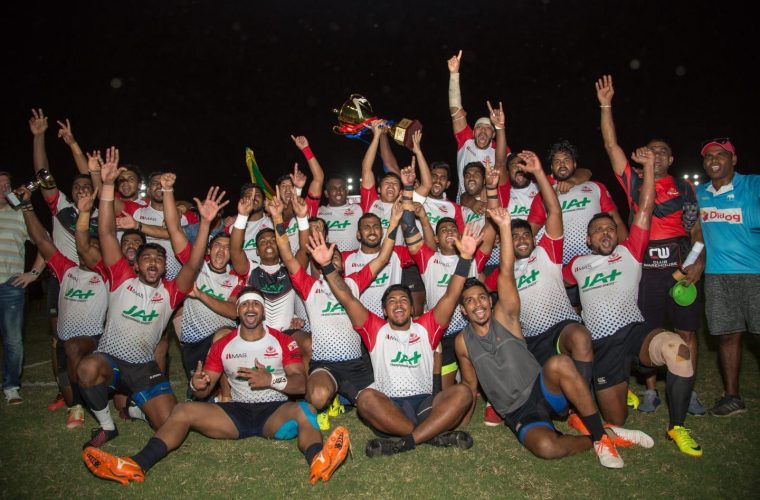 Colombo’s 17-15 win over the Doha Rugby Club on Friday 5 October, sealed not only their first match of the season but also gave the Dialog League back home an ominous reminder of their strength in depth for the coming season.

To mark the inauguration of the 1st Ambassador Cup match between Colombo and Doha Rugby Clubs, the Sri Lankan Attaché to Qatar - H.E. ASP Liyanage on Friday at the Doha Rugby Club drew on the ability for rugby to unify communities creating unforgettable friendships.

He said “Rugby it is a platform for opportunities” and he thanked the Colombo Rugby Club for the positive role it has played back home in “developing talented youths and producing Ambassadors for Sri Lanka”.

The Colombo rugby club, Ambassador Cup champions were missing several regulars, but it made little difference as they recovered from a shaky 12-3 deficit to narrow the score 12-8 at halftime.

A successful penalty goal early in the second half brought the visitors within 1 point of the hosts (12-11), however, that did not stop the barrage of pressure exerted by the Doha team. The hosts strategic tactic to play the match deep in the visitors half paid off intermittingly as Colombo infringed under pressure giving away another easy 3 points.

With 10 minutes to go and the scoreboard reading 15-11 Doha seemed to have the upper physiological advantage. Then the Sri Lankan tsunami crowd kicked in lifting their comrades with their chants and cheers. The Colombo players reacted to the call provide an epic power surge that earned them two consecutive penalty goals, the lead and finally the match.

Following the game, winning captain Yoshitha Rajapaksa praised the Doha team for their performance and thanked the strong crowd in attendance.

For their part Doha who was also minus a few of their top starters, were dominant throughout the match. Defensively, Doha was on the ropes time and time again however was equal to the task.

Their scrummaging was devastating at best, full of grunt and force. Even with their uncanny attack and the ability to produce unexpected performances from anywhere on the field, the hosts in the end were beaten by the slightest of margins.

Addressing the stadium Doha’s captain Elliot Johnston later said, “I like to thank all the sponsors for making this match possible and bringing Colombo over.”

“We really are starving proper professional rugby at the moment and to have this match today it’s very much refreshing and appreciated. We hope we can develop a long relationship with Colombo and hopefully respond kindly in the future”.

Following the match, the Colombo players paid homage to the Sri Lankan strong crowds applauding them for their support and attendance. They later mingled with families and friends who enjoyed shaking hands and taking selfies.