Cavendish wins the Tour of Qatar 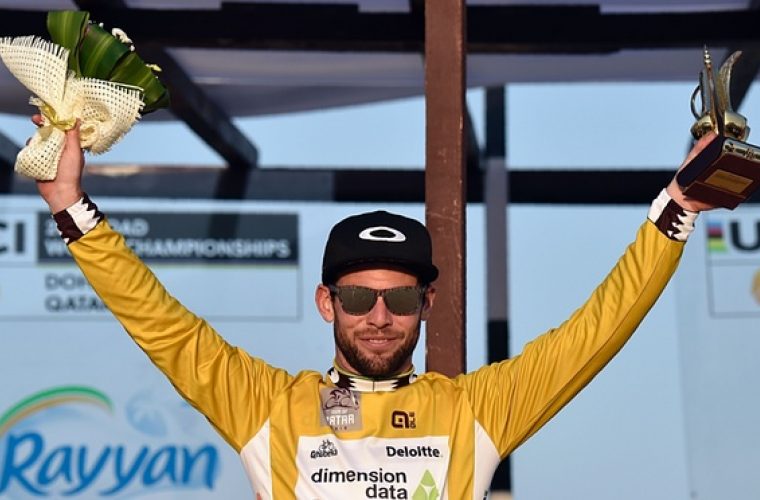 It took another photo finish to decide the final stage of the Tour of Qatar, once again the victory went the way of Alexander Kristoff (Katusha) with Team Dimension Data for Qhubeka's Mark Cavendish in second place. Roy Jans (Wanty Groupe Gobert) was the rider in third.

After three riders got away early on, Team Dimension Data's riders would control proceedings for the better part of the stage.

Once the gap hit 3'00", Katusha would provide two riders to lend a hand in the chase. At only 114km in distance, and the important bonus seconds up for grabs at the finish, it was always going to be a bunch sprint to decide the stage and the overall.

With 10km to go, the race was all together ahead of the expected bunch sprint.

Team Dimension Data for Qhubeka did a great job once again to leadout Cavendish, putting him in a prime position with 1km to go.

Edvald Boasson Hagen had already put Thursday's disappointment behind him, and did a crucial turn for Cavendish inside of 1km to go.

It was the Manxman and Kristoff going neck and neck for the final 200m and even on the finish line photo, it was difficult to determine the winner.

In the end, the stage victory went the way of the Norwegian rider.

With Cavendish placed second though, his overall lead was secure and he would win the Tour of Qatar by five seconds from Kristoff.

Boasson Hagen also finished in the pack on the stage to ensure he kept his fifth place on general classification too.

The result saw the African Team claim its first General Classification race win of the year.

"We were really motivated for today and I have won this stage before a couple of times. The wind was always going to make it difficult today, it was a block head wind and we thought it was going to be cross. Actually it was more a cross head wind so you were never really comfortable. We knew we were going to have to take control and the team were really motivated after yesterday.

"Obviously we were in control at the beginning of yesterday but then with the puncture of Edvald it really put the team in a difficult situation. It also made it harder for us to take the overall today so we really had to be on top of our game to make sure we finished on the top step of the podium.

"The lads did it perfectly on the final laps when it was hectic, keeping me in the front and out of danger, so I was ready for the sprint.

"Obviously it's nice to be wearing gold now, but I know I am only wearing it on behalf of Edvald. He only lost it because of bad luck and not through any other kind of cause. He should be the guy wearing this gold jersey but we are just super happy to keep it in Team Dimension Data.

"The team made the step up to World Tour this year and we've already won a GC. It is great for the new sponsors, Dimension Data, Deliotte and also to highlight Qhubeka here on the international stage," Cavendish said.