Biggest day yet at AIBA Boxing Championships in Doha 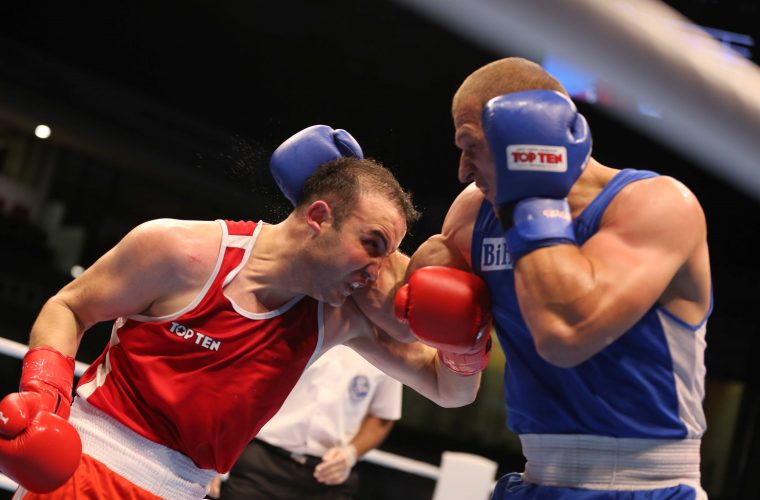 Second day of the groundbreaking Doha 2015 AIBA World Boxing Championships was another fine showcase of the incredible sporting talent on offer in the Ali Bin Hamad Al Attiyah Arena, with 88 athletes battling to get through to the next round.

DOHA, 7 OCTOBER 2015: Local fans from expat communities across the capital came out in numbers to support their boxing heroes on Wednesday, creating a joyous atmosphere with their colorful flags in the stands. For Team Qatar, the winning streak continued on home soil, with the light heavyweight boxer Hakan Murst Nuraydin defeating Bosnia and Hercegovina’s Dzemal Bosnjak by unanimous decision:

“First of all I have to thank my coach who’s been invaluable in my preparations going into these historic World Championships. My opponent was much bigger and stronger than me, but I used my brain and delivered the right punches at the right time. This was my gift for Qatar, and I thank God for the win!” a overjoyed Nuraydin said in the mixed zone right after his first bout.

“Qatar has enjoyed another magnificent day of world-class boxing in the heart of Doha. The energy and excitement continues to build and we’ve so much more to come with Manny Pacquaio visiting us tomorrow which is bound to inspire boxers and fans alike. There is so much colour and noise in the arena as fans from around the world flock to witness incredible performance filled with skill, speed and technique. I am both proud and humbled by the support being given to all boxers from the Qatari people while I’m also personally delighted that Team Qatar has responded to the challenge with clinical victories and another successful day at the highest level of the sport.”

One man spurred on by the news of Pacquaio’s imminent arrival, was Filipino welterweight boxer Eumir Marcial, who defeated his Egyptian opponent Walid Said Mohamed on technical knockout:

“To come here to Doha and compete in front of so many Filipinos was amazing. I never expected there to be so many of my own people in the arena, but I really hope they’ll keep turning up to support me. This is the first time I’m competing on senior elite level, but I hope to do my country proud,” Marcial said, before adding:

“Just before I got in the ring I heard the news about Manny Pacquaio coming to the World Championships in Doha. That is massive for me, and I really hope that I can get to meet him as he’s been my idol all my life.”

The other Egyptian in action yesterday was lightweight boxer Mahmoud Abdelaal Mahmoud who crashed out of the competition by unanimous decision to Japan’s Daisuke Narimatsu. For Syria, however, it was a day to remember with Alaa Ghoussoun defeating Erkin Adylbek Uulu of Kyrgyzstan.

The unanimous decision advanced the light heavyweight powerhouse to the next preliminary round, where he faces stiff competition from Kazakhstan’s Adilbek Niyazymbetov, the first-seeded silver medalist from London 2012 Olympics and the last World Championships in 2013.

“Being the only Syrian in these World Championships, this was a real accomplishment for me and my country. Sport has the power to unify countries and people, and I want to thank the Qatari people for giving me such a warm welcome. Now I’ll face a very difficult opponent who’s defeated me twice in previous competitions, it’s going to be hard to get through, but I’m in good shape and I’m here to fight for the world title.”

Morocco’s super heavyweight favorite Mohammed Arjaoui was on form against his opponent Edgar Munoz Mata from Venezuela, winning on technical knockout. He now advances to the next round where Britain’ Joe Joyce awaits on Friday night.

The other two Qataris in action were Hzam Nabah and Abdullatef Sadiq who both unfortunately lost their bouts despite a heroic effort in front an excited home crowd when facing Argentina’s Alberto Palmetta and Luis Cabrera of Venezuela respectively.

Sadiq, the reigning lightweight GCC champion, was distraught after exiting the competition.

“I am so happy to be fighting here in Doha in front of my family and friends, and it’s been such a huge experience for me, and I want to thank the Qatar Boxing Federation for making my dream come true. In the end it wasn’t to be this time around, and I can’t deny that it’s really hard to take.”