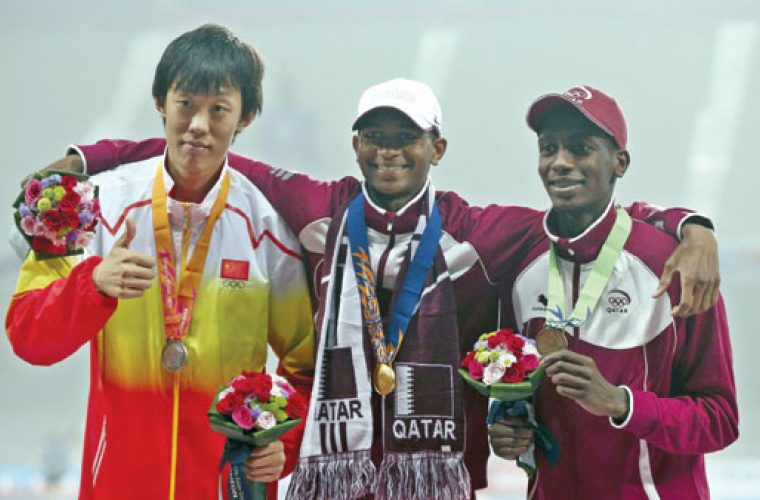 Watch out world of athletics, there’s another Barshim on the rise. Literally.

Qatar created sporting history in Incheon yesterday when high-jumping brothers Mutaz and Muamer Barshim lit up the Asian Games on a cold and rainy night with a gold and bronze respectively to herald what promises to be an exciting sibling rivalry that has the potential to grab plenty of global headlines in the future.

Mutaz cleared 2.35m to successfully defend his title, with China’s Zhang Guowei taking the silver with a best leap of 2.33m and Muamer the bronze with 2.25m.

Later in the evening, Qatar claimed two more gold to take their tally to eight, with Mohamed al-Garni adding the 1,500m crown to his 5,000m title won two days ago and Abubakar Kamal clinching the 3,000m steeplechase gold with a start-to-finish victory.

Qatar’s tally of eight gold has leapfrogged them to seventh position on the medal tally, a spectacular result for the contingent who had been lying low during the first week of the Games with their favourite events in shooting and athletics only scheduled for later.

But there was no doubt in anybody’s mind that it was the Barshim brothers’ day yesterday.

While elder brother Mutaz is already a star, having won the Asian Games gold in Guangzhou four years ago and later on claiming the Olympic bronze in 2012 and the Indoor World Championships title earlier this year, it was Muamer’s first big occasion in the global spotlight.

And with dozens of cameras recording the action for posterity, the 20-year-old didn’t disappoint with a hugely impressive performance that set tongues wagging that he could be even more talented than his elder brother.

Mutaz’s performance over the past couple of years had made him the clear favourite for the gold – indeed he has precious little competition in the continent – and at the Asian Games the main point of interest was whether he would indeed go on to break Cuban great Javier Sotomayor’s 20-year-old world record of 2.45m.

And although that didn’t happen – perhaps the cold and rainy conditions contributing to it – the performance of his younger brother ensured the sporting world’s attention yesterday would be firmly focused around the name: Barshim.

“It is amazing that Muamer got to share the podium with me today. He is hugely talented and I knew we would share the podium one day, but that it has come at the Asian Games is nothing short of awesome,” Mutaz said.

“He is also a hard worker who puts in a lot of effort in training and I am sure he will go places.”

The contrast in the two brothers’ approach to their discipline is obvious for the world to see. While Mutaz is calm and has an air of tranquility about the way he starts off, smoothly gaining pace as he approaches the bar, Muamer prefers a shorter run-up, with quicker and more aggressive strides.

The way they react to successful or failed jumps is also a study in contrast. While Mutaz’s facial expressions would hardly give anything away, Muamer is more exuberant. A loud roar and few furious fist pumps would accompany every successful jump, while a failure is greeted with an equally loud shriek of frustration with the veins in his neck threatening to explode out of his skin.

The youngster, however, was not focusing on that aspect after his medal-winning show.

“What is important is that I got to share the podium with Mutaz who is not only my elder brother but also my best friend and idol,” said the youngster.

“I look up to him and he shares a lot of tips with me, telling me to keep focused and to maintain my own style.”

Asked if he looked forward to sharing the spotlight with Mutaz regularly at international events, Muamer was game.

“It would be an honour for me and my family to see us regularly winning medals together. I hope we have similar moments together in the future.”

Based on yesterday’s evidence, the future indeed seems bright.