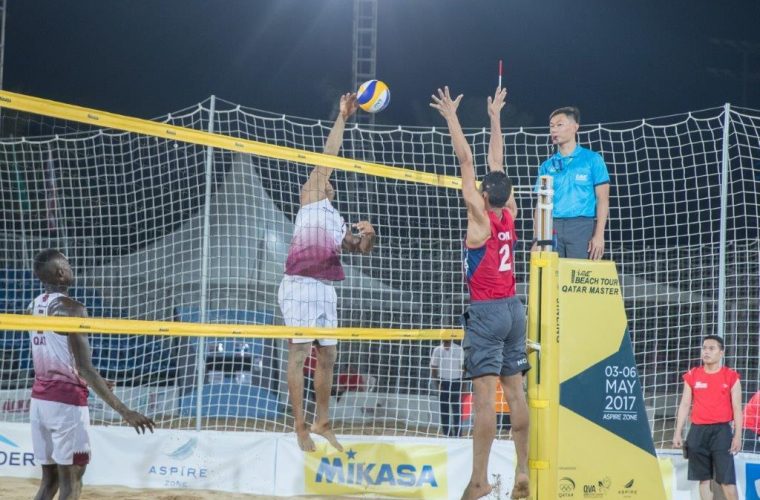 For the 7th consecutive year, Aspire Zone Foundation (AZF) is set to host the largest beach volleyball competition in Asia, the ‘Asian Volleyball Confederation (AVC) Beach Tour Qatar Master’. The four-day championship will take place at Aspire Park, from 27 to 30 November 2018. The event is jointly organised by Qatar Volleyball Association (QVA), Qatar Olympic Committee (QOC) and AZF.
Top teams from 24 Asian, African, Latin American and European countries with gather alongside more than 60 delegates including; athletes, coaches, and officials to give volleyball enthusiasts of all levels the opportunity to enjoy a fun-filled atmosphere.
The list of participating countries includes: Qatar, Argentina, Canada, Croatia, Czechoslovakia, Denmark, Germany, Great Britain, Ireland, Japan, Kenya, Latvia, Mongolia, Netherlands, Nigeria, Sierra Leone, South Africa, Chinese Taipei, Uruguay, United States of America, Zimbabwe.
Nasser Abdullah Al-Hajri, Director of PR and Communications at AZF, said: “The AVC’s commitment to host the international championship for seven consecutive years at the AZF is a testament to its trust in AZF’s capacity to organise international events, where AVC relies heavily on AZF’s organisational capabilities, world-class facilities and experts. The championship promises to be a successful competition that lives up to AZF and Qatar’s reputation as a global leader in organising sporting events. This year we are the organising partners of the event and we will also provide marketing and communications support to the competition.” The 2017 edition of the AVC Beach Tour Qatar Master featured twenty-four teams representing twelve countries. The teams included; China, Japan, Australia, New Zealand, Indonesia, Thailand, Oman, Saudi Arabia, Kazakhstan, Iran, Qatar and Taiwan. Qatar won the competition with Australia 2nd and Indonesia 3rd.