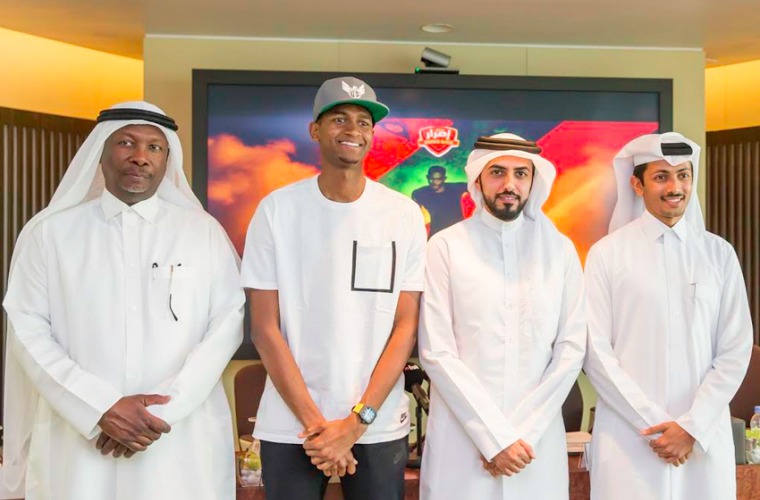 Aspire Zone Foundation (AZF) unveiled details about its upcoming ‘Esrar Race’ in a press conference on Monday, March 13th, revealing that the race, which is organised by AZF and ‘Diverse’, will be held from 7:00am-10:00am on Saturday 25th March at Aspire Park.

Media representatives were welcomed at the press conference by senior officials from AZF, including Mr. Nasser Abdullah Al-Hajri, Director of PR and Communication at AZF; Mr. Abdullah Al Khater, Events Manager at AZF; Mr. Khalid Saadoun Al-Kuwari, co-organiser and CEO of ‘Diverse’; and Qatari Olympic champion, Mutaz Barshim, as an ambassador for the race.

Speaking at the press conference, Mr. Nasser Abdullah Al-Hajri, Director of PR and Communication at Aspire Zone Foundation, thanked media representatives for attending and Olympic champion, Mutaz Barshim, for being part of the race as its ambassador.

Meanwhile, Mr. Abdullah Al Khater, Events Manager at AZF, said: “We are very thrilled to host the ‘Esrar Race’ in Aspire Park, and we’re hoping to see great participation from athletes and non-athletes. Leading athletes from the region have already expressed interest and signed up to participate, including Spartan race Elite athlete and Middle East’s champion in obstacle course races, Yousef Alshatti. We’re happy to collaborate with ‘Diversity’ for this thrilling event and we look forward to the day of the competition.”

Esrar Race is the first ever obstacle race to be held in Qatar. Designed to challenge even the hardiest athletes and non-athletes, the race consists of 14 obstacles, including the commando crawl, tyres split steps, 6ft wall and 8 ft. wall and inverted wall climbing, balance beam, sand bang carrying, vertical cargo net and monkey bar. The race is expected to attract over 200 men and women over the age of 18 who think they are up to the challenge.

Each obstacle will have different difficulty levels and will comprise primary and secondary challenges to cater for those who don’t feel ready to attempt the highest difficulty. Three winners from each gender group will also be awarded cash prizes, while AZF will donate 20 per cent of the profit from the competition to Qatar Charity.

Mr. Khalid Saadoun Al Kuwari, co-organiser and CEO of ‘Diverse’, added: ‘After taking part in similar races in other countries, we decided to bring the Esrar Race to Qatar because it has never been hosted here before. We approached Aspire Zone Foundation and we’re very thankful for their decision to agree to support this idea. Aspire Zone Foundation offers great facilities and we thought Aspire Park would be the ideal location in which to hold the race. We look forward to welcoming lots of local and regional community members, given that 20 per cent of our profit will be donated to Qatar Charity.”

Meanwhile, the race’s ambassador, Olympic silver-medalist, Mutaz Barshim, spoke about his decision to be part of the race saying: “I’m very thrilled to serve as the ambassador for the race so I can motivate young people, whether athletes and non-athletes, to participate and be part of this fun sporting activity. Races such as this are a great way to encourage community members to integrate sports into their daily routines, because exercise is a lifestyle. As the name suggests, competitors need to be fully determined to overcome these challenges if they want to win the race. The facilities at Aspire Zone are great and it’s exciting to see the event take place here.”

This event comes as part of AZF’s mission to promote sporting activity and provide a range of activities for all members of the community year-round, in line with Qatar’s National Vision 2030.

Prospective participants can register for the competition through http://www.lifeinaspire.qa or http://q-tickets.com.

More information about AZF’s programmes and events can be found on AZF’s social media channels, through the ‘Life in Aspire’ smartphone app, or the website http://www.lifeinaspire.qa.