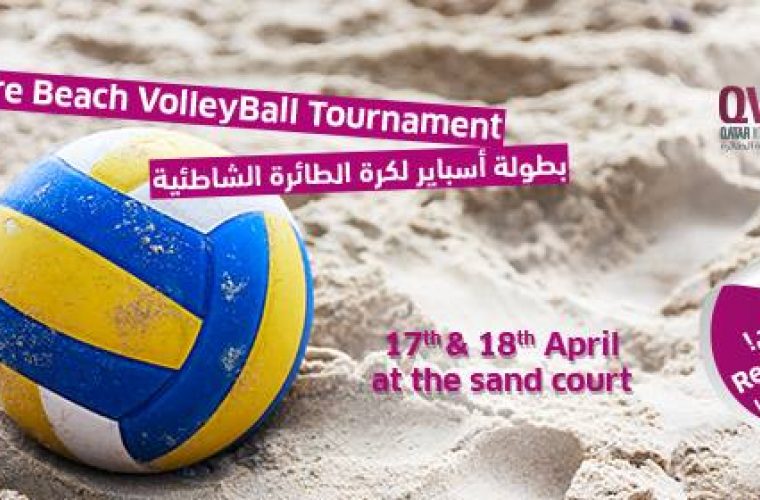 In a bid to continue promoting volleyball throughout Qatar and the benefits of living a healthy lifestyle, Aspire Zone has announced the first edition of the Aspire Beach Volleyball Tournament to be held on Friday, April 17 and Saturday, April 18, 2015 at the Sand Pitch at Aspire Zone. Aspire Zone has collaborated with the Qatar Volleyball Association to host this landmark event as it aims to diversify the sporting events that it has to offer the local community.

The inaugural Aspire Beach Volleyball Tournament is a unique opportunity for local residents to compete separately in a fantastic initiative, where they will have the chance to walk away with the best beach volleyball male/female team title in front of an enthusiastic home grown crowd.

64 participants are expected to take part in the Aspire Beach Volleyball Tournament, with the women’s tournament to be played on Friday, April 17th while the men’s tournament will take place the following day on April 18th.

Mr. Abdulla Al Khater, Events Manager at Aspire Zone said: “Aspire Zone is delighted to be hosting the first edition of the Aspire Beach Volleyball Tournament with the ongoing support of the Qatar Volleyball Association. We remain committed to organising unique events such as this one, and to really engage the community with a fun and challenging event.”

Mr. Mohammed Ali Al-Mohannadi, Secretary General at The Qatar Volleyball Association, said: “We are looking forward to building a solid relationship with Aspire Zone, which has a great role in sports development to highlight and promote out activities among Qataris and Residents for both genders.”

The event is open to both men and women, including Qatari Nationals as well as residents living in Qatar, that are aged 17 years and over. Aspire Zone has confirmed that registration for the Aspire Beach Volleyball Tournament is free, in order to give all members of the community the chance to participate in it.

Aspire Zone remains dedicated to organising events that promote living a healthy lifestyle and encourage the community to be active, such as Aspire Jam, Aquathon, Cycle in Aspire and Kids Run the Park. To register and secure your place at the Aspire Beach Volleyball Tournament, log on to: www.lifeinaspire.qaas spots are expected to fill fast.