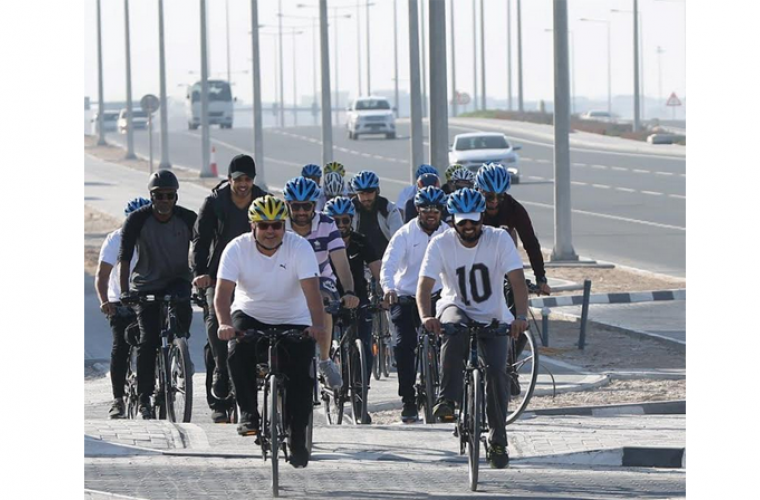 Ashghal in collaboration with Qatar Cycling Federation (QCF) organized a cycling event on cycling lanes on Arab League Street in Duhail with the participation of Ashghal’s President, Assistant President and staff along with Mr. Jamal Abdullateef Al Kuwari, QCF’s Secretary and a hefty number of bike riders.

Also, Ashghal conducted in cooperation with the United Development Company (UDC) some sport events at the Pearl’s Qanat Cartier where Ashghal’s directors, managers and employees took part in the games. The activities involved football, volleyball, fitness along with entertainments for the children to instill the culture and practice of sport as a lifestyle.

On the occasion, HE Eng. Saad bin Ahmad Al Muhannadi, says that Ashghal’s sport activities of this year shed light on the cycling lanes since it completed the works of hundreds of kilometres on major or express ways or on the local approaches to ensure safety given that the cycle paths are located away from the right-of-way.

He stresses that Ashghal has been interested in organizing various sport activities for its employees throughout the year or during the month of Ramadan. Ashghal also encourages its staff to practice sport regularly, providing sport halls with all sport equipment and skilled trainers.

For his part, Mr. Ibrahim Jassim Al-Othman, UDC President & CEO stated: "UDC was pleased to host the National Sport Day activities at its flagship development The Pearl-Qatar. We are a committed supporter of this unique national initiative to promote sports and health awareness across the community and encourage all residents of the State of Qatar to sustain the practice of sports and pursue a healthy lifestyle. As a leading Qatari shareholding company, UDC values its commitment to national and human development, and as such, proudly supports and encourages all initiatives and activities that embody this social responsibility element.”

Mr. Al-Othman continued by saying, “The open spaces, green areas, beaches and water fronts that naturally abound at The Pearl-Qatar are very conducive to sporting activities year round and have helped make the island a destination of choice for those pursuing a healthy lifestyle”.

All images courtesy of Ashghal