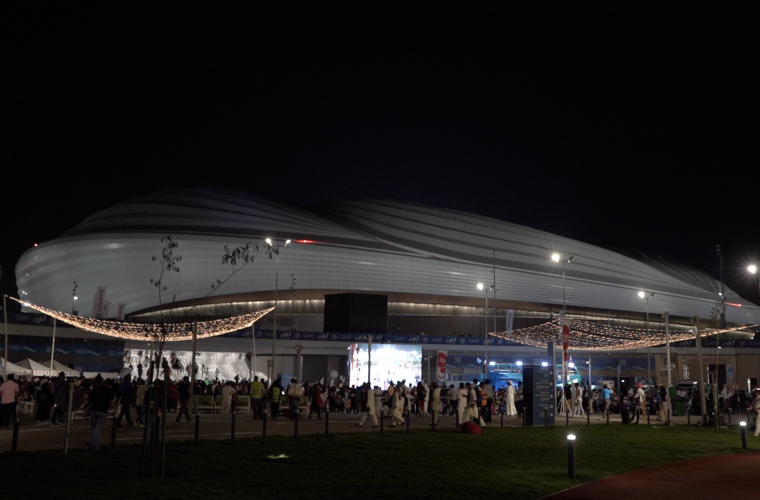 Located in the southern city of Al Wakrah, the Al Janoub Stadium opened on 16 May 2019 with the Amir Cup 2019 final. The 40,000 capacity stadium is the first of the 2022 Qatar World Cup to be fully built and the second to be ready to host the FIFA World Cup following the announcement of opening Khalifa International Stadium in May 2017.

ILQ was honoured to be one of the 38,678 visitors on this historical night and here are some notes from our experience!

Things we loved about!

This Air-conditioned stadium gave us an experience of indoor at outdoor with zero humidity or hot air. The stadium's cover works with air diffusers and there are under-seat cooling nozzles to pump cool air into the stadium, which is captured in the bowl. As the cooled air comes from underneath of the seats, it gets pretty chilly so make sure you take a jacket and wear socks!

We have seen many photos of this beautiful stadium and it is absolutely a stunning structure in and out!

The opening shows featured an amazing explosion of fireworks, colour, and music, which allowed Qatar to showcase its uniqueness.

There are plenty of WC all around the stadium, so you don’t have to queue for so long! There are some right behind the last seats on the top and also more in the corridor area.

There were many volunteers during this night! They asked us our gate as well as seat number to guide properly. All of them had a big smile on their faces welcoming everyone. Thanks to Qatar Volunteers!

Sticks and scarf of seeing you 2022

Each chair had chanting sticks and scarf! It added an experience level and everyone got a souvenir to keep the memory of this historical night!

Power banks, perfumes, lighters, selfie sticks, strollers, and some more items were not allowed but there was a deposit tent where we were able to leave our items safely while we enjoy the match.

Many security stands and officers

There were many security officers allocated for check up stands. The queue was not long at all.

Entertainment around the stadium

There was a number of entertainments going around the stadium to enlighten the mood - a saxophonist, group of people showcasing traditional dance and many more!

A giant fan zone with many food stalls was located right below the stadium. There were screens installed so people can watch the match in this area too!

Things that can be improved!

There were trash bins in different locations but considering the size of the stadium it was quite a bit of walking to the parking lot, more bins would have been helpful. We are sure once the stadium area is concerted, there will be much more bins to accommodate a massive number of visitors.

It was a bit confusing on how to queue at the concession stands. People were just lining up vertically and more lines were created, perhaps having an arrow marks would be helpful.

Both Ooredoo and Vodafone signals were very weak. Also, the stadium was offering free wifi. Many people were able to connect to public WIFI, however, I personally was not able to.

Our assigned parking was full and we were sent to other open parking which was just a sandy plot. We guess the parking areas are still an ongoing project and once it is completed, it will be more convenient to remember where my vehicle is parked with parking number.

Manners to be Improved by the attendees

Sit on your own seat

We faced a situation where someone else was sitting on our seat and he refused to move. The volunteers were very helpful and requested him to move to his own seat. Your ticket has a designated seat number, stay in your own seat!

Clean as you go!

Many people were throwing down nut shells, garbage and drinks were split all over. We witnessed a gentleman spitting on the floor inside of the stadium! Everyone should take their garbage as they go!

Don’t throw anything to others

Towards the end of the match, children took out plastic balls from the chanting sticks and started to throw them! It almost hit a little boy who was standing in front of us.

Monitor and Educate your children

Parents should monitor and educate their children's behaviour in public! We spotted a number of lost children crying around looking for parents. Visitors and staffs were helping these kids to find their parents but educating them on what to do in case they get lost would be helpful.

Most of the below items are pretty common sense but knowing what things are not allowed in advance would save your time entering the stadium.

Having a new stadium takes a lot of people's hard work! Thanks to Supreme Committee, Qatar Football Association, Ashgal, Hamad Medical Corporation, security officers from the Ministry of Interior and all the community members for volunteering to help out this night. Also, let's not forget to thank those who physically built the stadium!