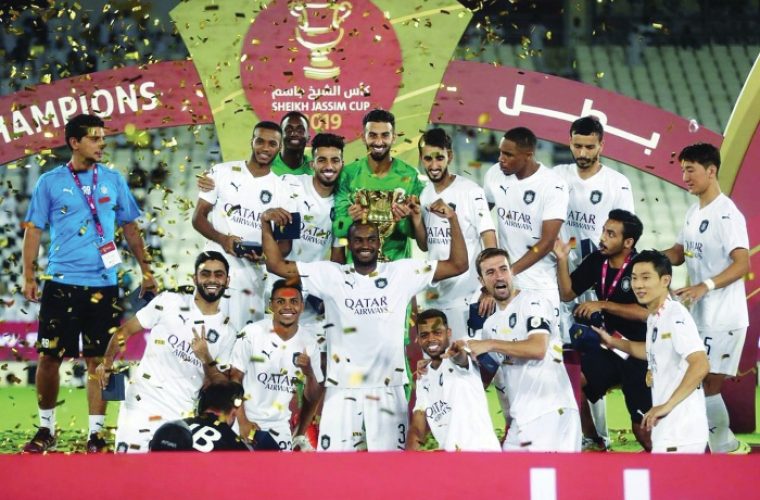 The one-off match between 2018-19 season QNB Stars League champions Al Sadd and HH the Amir Cup winners Al Duhail was fought at the Al Sadd Stadium at the brisk pace even though Al Duhail ended up the game with nine men after two of their players (Luis Martin and Asim Madibo) were shown the red card.

After Al Duhails Iraqi striker Mohanad Ali missed a chance and Edmilson was thwarted by goalkeeper Saad Al Dossari, the lead was almost doubled in the 29th minute, but Hashim Ali shot the ball over the bar after being fed by Akram, who was the livewire among the Al Sadd ranks yet again.

Al Sadd had more of the ball with 59 percent possession in the first half, which they extended to 63 percent by the end of the game. Al Sadd continued from where they left off and came close to scoring again when Hassan Al Haydous came up with a rising shot in the 51st minute only to be saved by Al Duhail goalkeeper Amine Lecomte.

South Korean midfielder Nam Tae-Hee, who switched from Al Duhail to Al Sadd this season, took the field on the hour mark in place of Hashim. Luis Martin was red-carded in the 68th minute for fouling Salem Al Hajri.

Al Duhail replaced Mohanad with Mohammed Muntari in the 86th minute in their bid to find an equalizer but in vain. Last-ditch efforts did not help their cause either, with Al Sadd defender Pedro deflecting out an angular shot from Muntari. Madibo received his marching orders in stoppage time following his foul on Al Sadd captain Gabi Fernandez.