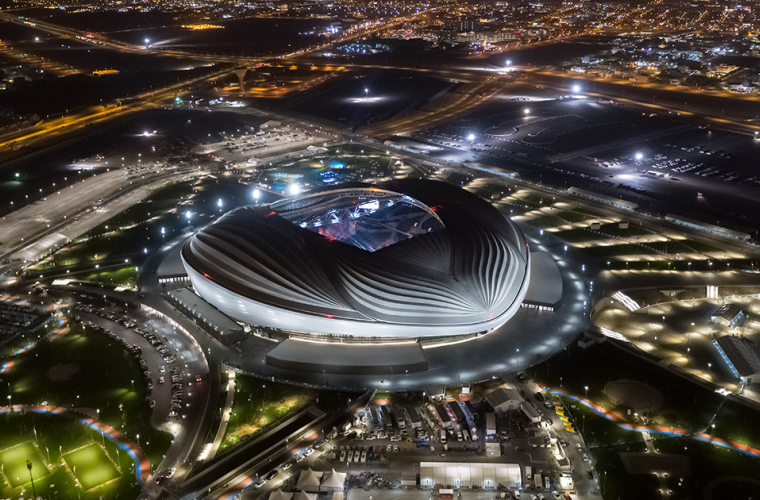 Al Janoub Stadium opened on 16 May 2019 with the Amir Cup 2019 final, which saw Al Duhail emerge victorious after a thrilling match against Al Sadd. About three and a half years before the kick off of the first Qatar 2022 match, Al Janoub Stadium in Al Wakra is the first stadium of the 2022 Qatar World Cup to be fully built and the second to be ready to host the FIFA World Cup following the announcement of opening Khalifa International Stadium in May 2017.

Work on the venue began in 2014 and involved thousands of people from all around the world. Above-ground concrete work started in February 2015, laying the foundations for the extraordinary stadium we see today. The two main roof supports were raised in September 2017. Then in May 2018, with a year to go until the stadium opened its doors, Al Janoub Stadium's distinctive roof was installed. In March 2019, the pitch was laid in just nine hours and 15 minutes.

The turf used was grown at a local turf nursery. Designed by late Iraqi architect Zaha Hadid, Al Janoub Stadium's graceful lines and flowing curves were inspired by traditional dhow boats weaving through the currents of the Gulf. This futuristic arena alludes to Al Wakrah's seafaring past a spectacular bridge between old and new, and a strong visual representation of Qatar's drive to reach beyond its shores. The view from inside the stadium is just as stunning, where bowed beams hold up the roof, resembling a ship's hull and allowing light to flood into the arena. Plenty of light doesn't mean too much heat though.

Alongside an innovative cooling system, ingenious design plays a part in keeping fans, players and officials comfortable. Detailed micro-climate analysis informed the arena's shape, with aerodynamics and optimal shading from the roof (which incorporates a minimal amount of glass) making a significant contribution to temperature control. Sustainability runs right through this arena and the surrounding complex, married with an eye-catching design. The whole shape of the stadium hides a remarkably green temperature control method, making its clever aerodynamic design do much of the work.

The roof provides significant shade, taking the weight off the advanced cooling systems. The inventive maritime traders who called Al Wakrah home in centuries past would be proud of the creative thinking used to protect the environment they loved. Modern-day Qatar can also be proud, as the country continues to make great strides towards achieving the environmental goals set out in the Qatar National Vision 2030. Al Janoub Stadium has already received a provisional letter of conformance from the Global Sustainability Assessment System Trust owing to its eco-friendly technologies and carefully sourced building materials.

The local football team, Al Wakrah Sports Club, have excitedly awaited the arena's completion. After the 2022 FIFA World Cup Qatar it will become the club's home, with a reduced capacity of 20,000 guaranteeing an electric atmosphere for their Qatar Stars League matches. The other 20,000 seats will be donated to football development projects overseas, once again demonstrating Al Wakrah's innovative nature and ability to connect with far-off lands.

In November 2018, the stadium received a Class A* sustainability rating from the Global Sustainability Assessment System (GSAS), recognizing the project's extensive efforts to protect the environment. Improvements like these will, of course, benefit Al Wakrah and Qatar far beyond 2022. Both by protecting the environment now and demonstrating how it can be done, Al Janoub and all of our Qatar 2022 stadiums are creating a better future for generations to come. It's not just visitors from overseas who can enjoy this wonderful venue.

A school, wedding hall, cycling, horse riding and running tracks, restaurants, marketplaces, gyms and parkland are just some of the new amenities that are being developed to accompany Al Janoub Stadium. Residents will see great long-term benefits from the project, which will bring their tightly knit community even closer together.