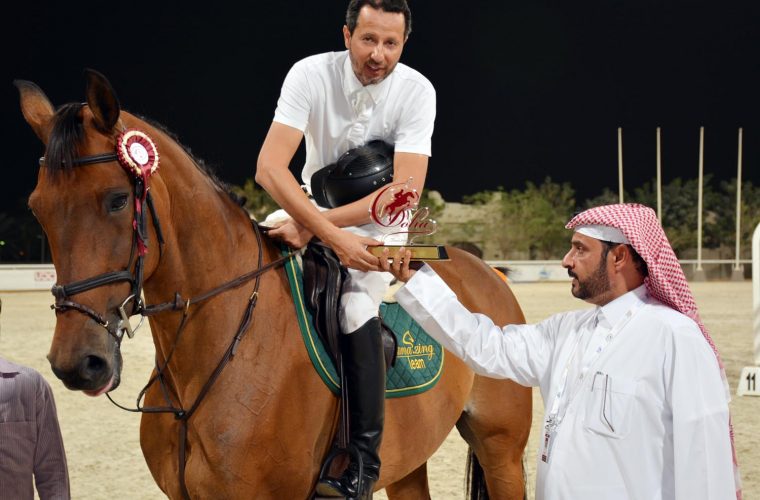 DOHA: Khalid Abdulaziz Al Eid yesterday produced a flawless routine with his ride Senorita to win the top prize in the two-phased 140/145cm class on the opening day of 2015 Doha Tour.

Bader Mohammed Alfard astride Bijou van de Vijfheide finished in second spot with 29.90. Alfard picked up the prize of QR 8,000. In third place was Abdullah Waleed who was astride Sacramento. Waleed clocked a time of 29.93 to pick up the prize of QR 6,000.

Earlier in event three with jump-off, Al Eid produced a near-perfect routine with Valuta to top the 25-entry field at QEF’s Outdoor Arena.

In event two going against the clock, Alfard emerged a convincing winner with Cognac, clocking a time of 55.39 seconds to claim the top prize of QR 5,000. Ali Yusef Al Malki, astride Looping 46, clocked a time of 57.82 seconds in the 120/125cm class to finish second. Al Malki won QR 4,000 for his efforts.

In the day’s opening event, the optimum time class, Tamazir Saeed topped the 28-entry field winning the event with a tally of 75.48 points with Outline De Beafour. Mardaf Mohammed Al Qashooti also produced a flawless routine, finishing second with Wendefi with a score of 74.95.

Mohammed Khalid Al Qashooti - astride Alibaba Z- was third with a tally of 74.92.

The first leg of this inaugural event will end today at QEF’s Outdoor Arena with competitions commencing at 3:00pm. Competitions will take place in three classes.

A whopping QR 80,000 will be up for grabs in the Doha Tour Grand Prix which will commence at 6:00pm today.

QEF plans to add another stop and take event either to Aspire or Katara from next season and unveil series as an international event.