A state of passion seizes Qatar, as FIFA World Cup Trophy is Unveiled 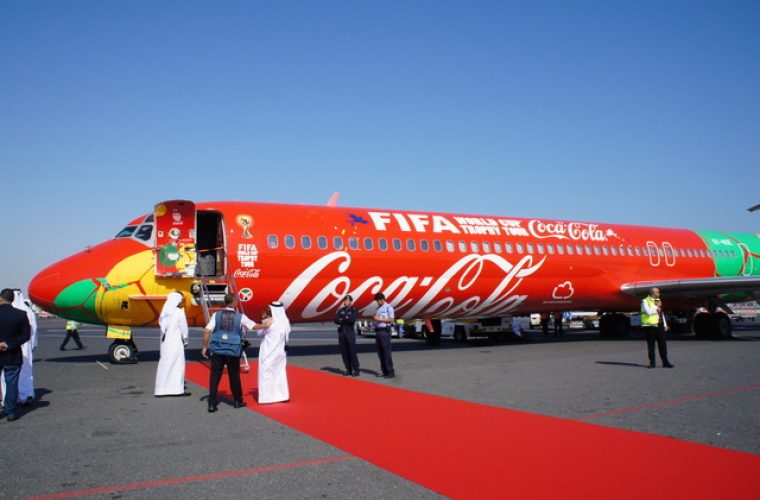 Today, Coca-Cola elevated Qatar to a state of football frenzy as the FIFA World Cup™ Trophy was revealed to the public at Doha International Airport. The passionate reception of the Trophy foreshadows the contagious excitement of Qatar hosting the FIFA World Cup™ in 2022.

The ceremony to welcome the trophy to Qatar was hosted by the Coca-Cola delegation in coordination with FIFA representatives. In attendance, was a number of VIPs from the Qatar Football Association, such as Saoud Al Mohannadi, General Secretary of QFA, along with respected members of the Qatar 2022 Foundation. Guests also included esteemed government officials and members of the press.

Fans will be able to participate in a series of interactive activities in the large outdoor expanse before going through to see the trophy. A larger than life ‘Brazuca’ football, the official match ball of the 2014 FIFA World Cup™, will be made readily available for fans to see in the adidas area, which will contribute toward the authenticity of the experience. Fans will also be able to play a football game on SONY Play station consoles whilst listening to great music from Coke Studio and of course, the Anthem.

As an advocate of a healthy and active lifestyle Coca – Cola also is giving fans the opportunity to test their football skills in a ‘shoot and score’ challenge which will highlight the nation’s passion for the sport. The FIFA World Cup™ mascot, Fuleco will be prevalently present, fueling the excitement for the FIFA World Cup™ in Brazil. Lucky fans will get to revel in the fact that they were face to face with the pure gold trophy, weighing in eat five kilograms of 18 carat gold and standing at 14.4 inches tall.

Each fan can embrace the opportunity to have their photos taken with the trophy as a memoire of this unforgettable occasion. McDonalds will provide hungry fans with ‘The Perfect Serve’ snack after they had spent some quality time with the trophy. FIFA Ambassador and former Argentina international Gabriel Calderon said "I am delighted to have been selected to participate in the 2013 FIFA World Cup™ Trophy Tour. The FIFA World Cup™ Trophy is a symbol of sporting prowess, bringing great nations together to celebrate the beautiful game. Playing in the FIFA World Cup™ was the biggest honour I could have imagined, and I have witnessed and experienced the same passion and admiration for the game throughout the Middle East during my time here. This is a fantastic experience to be a part of."

Scott McCune, Vice President of Integrated Marketing Coca-Cola Middle East said, “Bringing the trophy to Qatar has been a truly humbling experience. To be able to witness the power football has to bring people together under a common passion. This is what makes this trophy, the “world’s cup” which is why we are taking the trophy on its longest journey to date, visiting 90 countries over 9 months.

To quantify the tour, we will be traveling 92000 miles which is over 3.5 times around the world.” Khalifa Al Haroon, founder of iLoveQatar.net was also attending the event and was one of the few people allowed to go on board the world cup trophy plane. He commented, ''It's fantastic that we have been given the opportunity to host the world cup not only has it united the region but its an opportunity for us to show the world how great welcoming and forward thinking Qatar is.'' For the latest from the FIFA World Cup™ Trophy Tour including upcoming tour destinations and dates, exclusive interviews, photos and videos, visit the official websitewww.fifa.com/trophytour