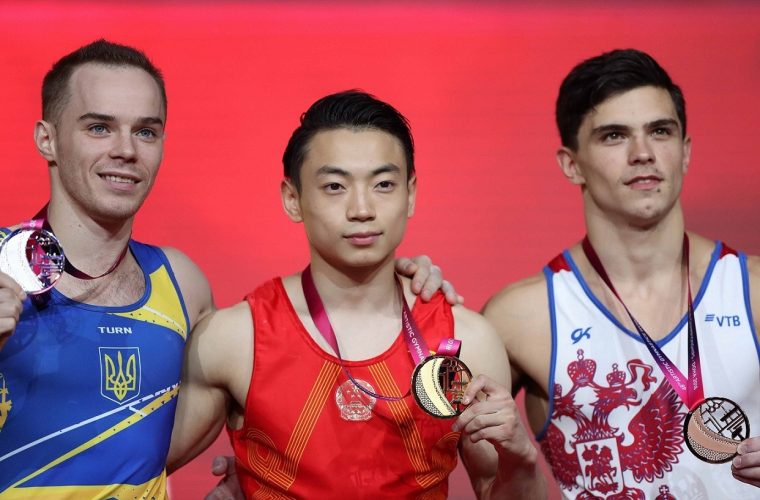 Olympic champion Ri Se Gwang of the Democratic People’s Republic of Korea lived up to his reputation after he won the men’s vault final, which was the first event of the day. Ri tallied an impressive 14.933 amid thunderous applause from the Korean fans.

Russian Federation’s Dalaloyan (14.883) took the silver while there was further disappointment for Japan’s Kenzo Shirai, who failed to defend the title. Shirai, who finished third in floor on Friday, had to be content with bronze (14.675).

China’s Liu Tingting unearthed a huge surprise in the women’s balance beam final when she won gold. The 18-year-old scored 14.533, not only overcoming World Championship rookie Anne-Marie Padurariu of Canada by 0.433 points for the title but also denied superstar Simone Biles of USA (13.600) her fourth gold in the competition. This was Liu’s second medal in the event after winning a bronze in the Team final.

China’s Zou Jingyuan reigned his world title on parallel bars, with a huge score of 16.433. Ukraine’s Oleg Verniaiev was the closest gymnast to him with 15.591 followed by Artur Dalaloyan who picked up bronze (15.366) and his fifth medal of the championships.

Simone Biles entered into the record books on her second outing to the podium, to take on the floor final with ease. The 21-year-old, became the become the first gymnast since the former Soviet Union's Yelena Shushunova in 1987 to win a medal in every single event at the Worlds in Doha.

Biles won the gold with 14.933 points followed by compatriot Morgan Hurd (13.933) and Japan's Mai Murakami (13.866). In the process, Biles, who earlier won gold medals in All-Around, Team and Vault besides a silver in Uneven Bars and bronze in Balance Beam, tied Svetlana Khorkina's all-time high of 20 World Championships medals.

The Men’s Horizontal Bar final closed proceeding for the evening and competition. Epke Zonderland for The Netherlands took his third World title in a row with a staggering 15.100, with ‘King’ Kohei Uchimura in silver medal position for Japan (14.800) and Samuel Mikulak taking bronze for Team USA to mark his first world medal.

The ceremony was closed with the official handover of the FIG flag to Stuttgart, who will now host the event in 2019.