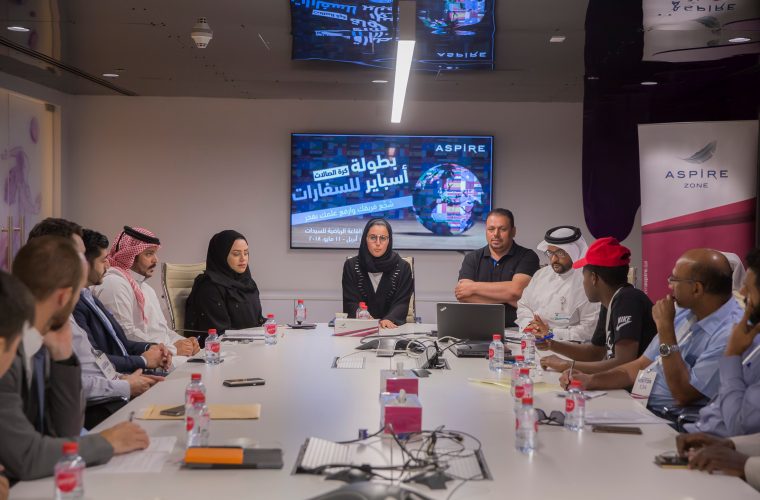 Aspire Zone Foundation (AZF) has concluded its technical meeting and draw for the upcoming 2nd Aspire Embassies Futsal Tournament that will take kick off next Friday, 13 April, and will run each weekend until 12 May, at the Ladies Sports Hall. Embassy representatives taking part in the competition were in attendance.

The tournament will feature 16 teams. The teams represent Algeria, Djibouti, Ethiopia, France, India, Jordan, Kazakhstan, Kenya, Qatar, Somalia, South Africa, Spain, Sudan, Syria and the United Kingdom. The Qatari team will include members from the Ministry of Foreign Affairs, and two diplomats from each embassy will take part in the competitions. AZF has also lined up its own team of amateur footballers to participate.

During the meeting, the organising committee went over the rules and regulations of the tournament, as well as tactics for qualifying for the final stages of the event.

Speaking at the meeting, Ms. Al Anoud Al Misnad, a member of the tournament’s organising committee, said: “AZF brings back the tournament for the second year as per the Embassies’ request, many of whom took part in the first edition. The tournament is organised in line with AZF’s efforts to promote a healthy and active lifestyle among community members of all ages, and to bring everyone together under the name of sports. We wanted to get the embassy employees out of their routine into a relaxed yet active environment. AZF’s participation in this tournament is also part of its efforts to maintain a good level of engagement with various local and international entities around Qatar.”

A draw was also conducted to determine the groups each team will be placed under. In Group (A) are: Kenya, Ethiopia, India, Kazakhstan. In Group (B) are: France, Jordan, Sudan and Algeria. In Group (C) are: South Africa, Djibouti, Somalia and Qatar. Finally, in Group (D) are: Aspire, Spain, Syria and the UK.

Attendance is open to everyone keen to follow the matches and support their country representatives.

Speaking after the technical meeting, Mr. Daniel Mantini, Political Officer at the British Embassy in Qatar and the UK team representative at the tournament, said: “We enjoyed taking part in the 1st Aspire Embassies Futsal Tournament, including Mr. Ajay Sharma, the British Ambassador to Qatar, who competed in almost every match. Many of the British community members attended to cheer us on which made the competition more enjoyable so we’re excited to take part again.”

Mr. Samuel Ducroquet, Second Counsellor at the French Embassy in Qatar and the team’s representative at the meeting, added: “We’re very delighted to be part of this year’s inter-embassy tournament. Our team will be led by our ambassador, Mr. Eric Chevallier, who’s very excited to play within the beautiful infrastructure Aspire has to offer. We hope this tournament will be a good opportunity for us to get to know each other more, show some fair play and see how active people in Qatar can be.” Meanwhile, Mr. Abdulaziz Al Mansouri, employee from Qatar’s Ministry of Foreign Affairs, said they were excited to take part in the 2nd Aspire Embassies Futsal Tournament, especially after winning first place in the 1st Edition, adding that they expect to go a long way in the tournament again this year.