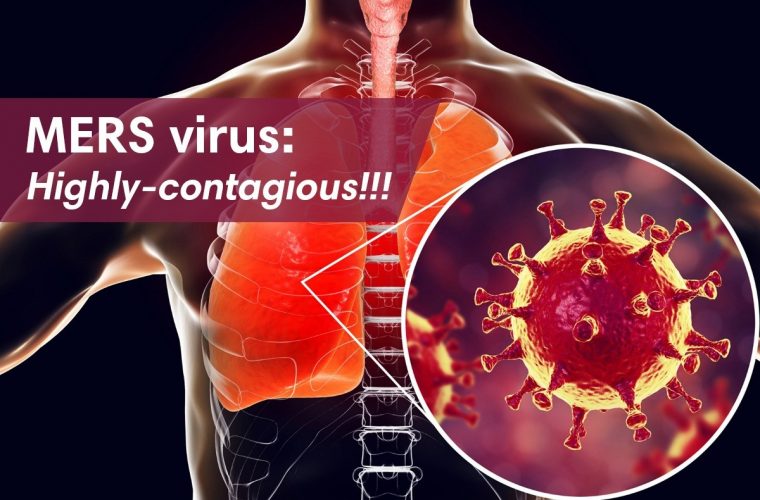 The Middle East Respiratory Syndrome (or simply MERS), from the name itself is a viral respiratory illness rampant in the Middle Eastern region with several reports claiming Saudi Arabia as its place of origin back in 2012—after a person fell ill in the outbreak of a then-new flu.

The virus that causes MERS is different from any other virus that has been previously found in humans. Symptoms of MERS include fever, cough, and shortness of breath. The Centers for Disease Control and Prevention (CDC) is working closely with the World Health Organization (WHO) and other partners to understand the public health risks from this virus.

MERS is considered a deadlier but less transmissible cousin of the SARS virus that appeared in Asia in 2003 and infected 8,273 people, nine percent of whom died. Like SARS, it appears to cause a lung infection, with patients suffering coughing, breathing difficulties and a temperature.

At the time of writing, MERS is one of several viruses identified by WHO as a likely cause of a future epidemic. They list it for urgent research and development.

Researchers warn that as long as the highly-contagious respiratory disease—with a 30-40% mortality rate—continues to circulate in the Middle East, governments and health care providers should be prepared for sudden outbreaks elsewhere.

Cases have been reported in over 21 countries, including Saudi Arabia, Jordan, Egypt, the United Arab Emirates, Kuwait, Turkey, Oman, Algeria, Bangladesh, Indonesia (though none were confirmed), Austria, the United Kingdom, South Korea,the United States, Mainland China, Thailand, the Philippines, and the State of Qatar.

Second case reported when a a 49-year-old male Qatar resident presented with similar flu symptoms, and a sequence of the virus was nearly identical to that of the first case.

Similar cases appeared in the two countries where MERS was first found. Additional cases were noted, with deaths associated, and rapid research and monitoring of the novel coronavirus began.

UAE authorities said MERS had killed 10 people and infected 68 others in the seven-member federation since March 2013.

It was reported how a single patient infected 82 people with the deadly MERS virus in an overcrowded South Korean emergency room in 2015.

Here's what unfolded in a nutshell:

"The outbreak began with a 68-year-old man—known as 'patient 1'—who had travelled to Bahrain, the United Arab Emirates, Saudi Arabia and Qatar in the spring of 2015. Correctly diagnosed, he was admitted to Samsung and isolated from other patients. But unknown to doctors and health officials, he had already infected several other people, including a 35-year-old man with whom he shared a ward in another health facility. It was this younger man, 'patient 14,' who later spread the virus through Samsung's emergency ward."

After 186 known infections all in all, including nearly 40 fatalities were confirmed, the case is the most prolific transmission of Mers virus from one patient outside the Middle East.

A 73-year-old Emirati man was reportedly the latest victim of the MERS coronavirus and also infected a woman who has since recovered.

An elderly Omani man, who tested positive for MERS after arriving to Thailand with high fever, was quarantined in a hospital in Bangkok. Thai health officials tried to trace more than 250 people who may have come into contact with him with 37 of them being at 'high risk' of contracting the virus.

A 66-year-old Qatari man was pronounced dead after contracting the MERS virus, in the first fatal case in the Gulf state in over 10 months. In a statement, the Ministry of Public Health, quoted by Qatar News Agency, said the man "had been suffering from several chronic diseases and died of complications from the disease".

A 40-year old camel worker has tested positive for the MERS virus, making him the second case confirmed in Qatar for 2016.

The worker, who was neither in contact with a suspected patient nor abroad during the last two weeks, is free from chronic diseases that usually cause immunity suppression. He was admitted to Hamad General Hospital with general symptoms where routine investigations tested positive for Mers-CoV despite him not exhibiting any respiratory related symptoms.

The third recorded MERS case in Qatar was from A 23-year-old resident. The patient has been admitted to Hamad General Hospital and his condition is stated to be stable. A statement said the patient is receiving necessary medical care at the isolation ward according to the national protocol of the infection prevention and control.

In Malaysia, A man fell ill after drinking unpasteurized camel milk during a pilgrimage to Saudi Arabia.

One additional case of MERS was reported in Qatar when a 62-year-old developed symptoms mid-March. The patient who has comorbidities was first seen in a private clinic. He was then admitted to hospital five days after and was tested positive using real-time PCR (upE and ORF1b and N). He is currently in stable condition and admitted to a negative pressure isolation room on a ward.

To date, Qatar has reported 19 laboratory confirmed cases of MERS.

A 25-year old expatriate has tested positive for MERS in Qatar. The patient suffered from fever, cough, cold and body pain for few days and was initially treated at a primary healthcare centre and later transferred to the Hamad General Hospital.

Since the outbreak of the disease in 2012, Qatar has recorded 20 confirmed cases of MERS and seven of the victims were reported dead.

MERS outbreaks killed 23 people in Saudi Arabia between January 21 and May 31 this year the World Health Organization announced. The deaths were among 75 laboratory-confirmed cases during the period, the WHO said, and take the total number of deaths from the disease to 790 since it was first diagnosed in humans in 2012.

Qatar's Ministry of Public Health has announced that a new MERS case has been confirmed on a 29-year-old camel worker. The patient had complaints of fever and dry cough for several days. He sought medical attention in Hamad General Hospital where an X-Ray investigation suggested severe pneumonia. As he was in frequent contact with camels, further samples were collected from the patient. He ultimately tested positive for MERS according to Hamad Medical Corporation laboratories.

A person in northern England has been diagnosed with the potentially deadly MERS and was treated at a hospital in Liverpool. The patient is a resident of the Middle East, where they were believed to have contracted the infection before travelling to Britain. It was the fifth case of the disease diagnosed in England, the others having been identified in 2012 and 2013.

South Korea reported its first case of MERS in three years when a 61-year-old businessman was diagnosed with the highly contagious viral respiratory illness, according to officials at the Korea Centers for Disease Control and Prevention (KCDC). He returned to South Korea from a business trip in Kuwait where he stayed for three weeks. He was hospitalised with fever and phlegm and has been quarantined at a university hospital.

How to prevent the spread of MERS virus, according to WHO

Based on the current situation and available information, WHO encourages all Member States to continue their surveillance for acute respiratory infections and to carefully review any unusual patterns. Until more is understood about the virus, people with diabetes, renal failure, chronic lung disease, and immunocompromised persons are considered to be at high risk of severe disease from the MERS infection.

Therefore, these people should avoid close contact with animals, particularly camels, when visiting farms, markets, or barn areas where the virus is known to be potentially circulating. General hygiene measures, such as regular hand washing before and after touching animals and avoiding contact with sick animals, should be adhered to.

Infection prevention and control measures are critical to prevent the possible spread of MERS in health care facilities. It is not always possible to identify patients with MERS early because like other respiratory infections, the early symptoms of MERS are non-specific. Therefore, health-care workers should always apply standard precautions consistently with all patients, regardless of their diagnosis.

Food hygiene practices should be observed. People should avoid drinking raw camel milk or camel urine, or eating meat that has not been properly cooked.

WHO does not advise special screening at points of entry with regard to this event nor does it currently recommend the application of any travel or trade restrictions. But they can take these everyday actions to help prevent the spread of germs and protect against colds, flu, and other illnesses:

If you get sick while travelling, click HERE for information about how to locate medical services overseas.

Should you stay away from camels?

The MERS virus has been found in camels, and some patients with MERS have reported contact with camels. However, we do not know exactly how people become infected with the virus.

WHO has posted a general precaution for anyone visiting farms, markets, barns, or other places where animals are present and you can find it HERE.

Once a case has been confirmed, the rapid response team of the Health Protection and Communicable disease Control department at the Ministry of Public Health in Qatar (MoPH), accompanied with the team from Animal Health Department, Ministry of Municipality and Environment, will start a field investigation to assess the possible source of the infection and to verify whether any of the patient contacts has suspected symptoms. Consequently, all traced contacts will be monitored over a period of two weeks, while those who develop suspected symptoms will then be subjected to confirmatory laboratory investigation.

In the other hand, while research efforts continue on a global and local level to determine the modes of transmission of the infection, the MoPH is constantly advising citizens and residents who suffer from chronic diseases to avoid direct contact with camels and to wash hands with soap and water thoroughly. Also recommended are implementing respiratory hygiene and cough etiquette and the need to boil camel milk before drinking.

MoPH added that Health Protection & CDC Hotlines 66740948 and 66740951 are accessible 24/7 to respond to any notification or inquiry related to infectious diseases.

About the Ministry of Public Health Qatar

How much do you know about the MERS virus before going through this article? Did we help you acquire enough information in case a friend or loved one of yours develops a symptom? Drop us a line in the comments and also, don't forget to like and share this article—it keeps us going!