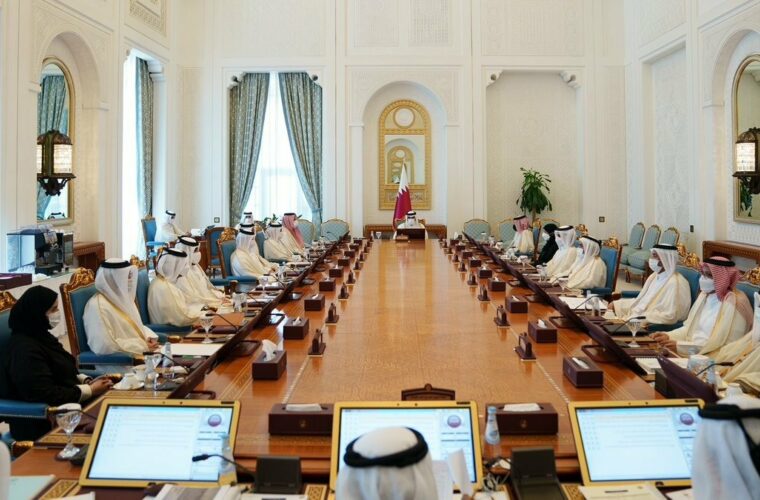 The Cabinet, in its weekly Cabinet meeting, has approved a draft decision to amend some provisions of the executive regulations of the Civil Human Resources Law. Chaired by Prime Minister and Minister of Interior H.E. Sheikh Khalid bin Khalifa bin Abdulaziz Al Thani, the Cabinet took the decision in this regard on Wednesday.

The amendment provides for an increase in the value of the marriage advance to a maximum of QR300,000 for all Qatari employees instead of QR100,000 (current marriage advance), in order to encourage Qatari youth to marry and help them in this regard.

The cabinet had also praised the Amiri decision no. 18 of 2022 issued by H.H. the Amir Sheikh Tamim bin Hamad Al-Thani increasing the pensions of retired individuals. The decision coincided with His Highness issuing law no. 1 of 2022 on Social Insurance and law no. 2 of 2022 on military retirement.

The cabinet also affirmed that the laws on Social Insurance and military retirement represent a qualitative leap in the field of social security and retirement that reflects the renaissance the state has been witnessing in all fields.

The cabinet renewed the State of Qatar's condemnation of the Israeli occupation's violation of the sanctity of Al Aqsa Mosque, and the settlers entering the mosque under military protection, in addition to the assault on Palestinian worshippers and preventing Palestinians from carrying out their religious rituals during the holy month of Ramadan. The cabinet said that the actions represented a dangerous escalation of Israeli aggression against Palestinians in Al Quds and all occupied Palestinian land. It added that it was also an intentional provocation of the feelings of millions of Muslims, and a clear undermining of international laws, conventions, and resolutions.

The cabinet also said that the Israeli occupation's actions show that they make light of Arab and Muslim reactions to these illegitimate practices.

The cabinet stressed that the Israeli occupation's actions at Al Aqsa Mosque and Al Quds along with other occupied Palestinian lands in terms of murder, oppression, terrorization, Judaization, and expansion of settlement activity require urgent Arab and Muslim action, as well as an international intervention to force Israel to end its aggression against the Palestinian people and adhere to UN resolutions pertaining to the matter, in addition to acknowledging a two-state solution that ensures a fair, permanent, and comprehensive peace.

Aside from this, the Cabinet has also discussed various topics, including the current actions taken towards the pandemic. The Cabinet affirmed the continuation of the precautionary measures that have been taken to combat the pandemic.

After that, the Cabinet had approved draft decisions from various Ministries:

The Cabinet has also reviewed the following topics and took the appropriate decision in their regard: