Whose Line Is It Anyway? brings the laughs live to Qatar! 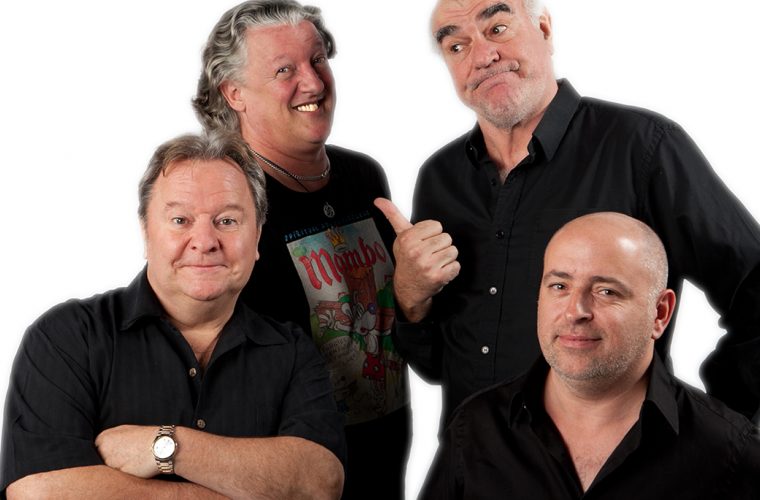 (Stephen Frost [in green] and Steve Steen during an improv comedy show in Hong Kong.

Humour’s one of those indefinable things – you either have it or you don’t. What one person may find funny, might not even crack a smile on the next. But by gosh, if you’re a comedian, you’ve gotta try! When laughter’s your craft…from solo stand-up, to fall-down funny improv…that collective current of audience chuckles is what keeps you going and the giggles flowing.

This coming Saturday, May 13, comedy-goers in Qatar can catch some of Britain’s best as the famed Whose Line Is It Anyway? returns to The Grand Hyatt Doha with a whole new troupe of troubadours that will have you laughing with them – and at them!

ILQ is giving away two tickets each to Saturday’s show, brought to you by Alive Entertainment Qatar, to two lucky winners! Want to win? Scroll down to enter at the link below! We’ll be announcing the winners on Wednesday, May 10, 2017. In the meantime, here’s some wise words of witticism from actor, comedian, and Whose Line Is It Anyway? improve superstar, Stephen Frost!

ILQ: You’ve had a long career as a comedian and television actor in Britain – having appeared in Black Adder, Whose Line Is It Anyway?, Mr. Bean, and your own series, Lazarus and Dingwall on BBC2 alongside your long-time comedy partner Mark Arden, to name a few. But you and Mark got your start as The Oblivion Boys on Channel 4’s Saturday Live in the mid-1980’s.

Do you remember anything specific about the first time you appeared on Saturday Live? Maybe your stomach was off that day from nerves/excitement? Did the sketch go the way you’d hoped? Who was the first person you called after the show wrapped?

SF: Well you've certainly done your research. That's my career completely; you've even got some stuff I didn’t know I did! Good times. We were part of a new comedy movement, so it was all very exciting. Mark and I were gigging seven days a week, so going live on TV wasn't that big a deal for us…in fact we preferred it. We'd already done a live TV show before, (Carrots Lib) for the BBC, so that’s just how we worked.

Nerves? No. Apprehension? Yes. It went as planned, but we ad-libbed a bit as we normally did. We called no one after the show, no mobile phones then.

ILQ: You’re on-stage here in Qatar as part of the Whose Line Is It Anyway troupe. Tell us about how you develop a knack for improv comedy. Was there ever a time when you thought you were funny, but you just didn’t quite nail it, but you had no idea as it was happening? Or do you just have to give over to the fact that, at some point, you’re going to make a fool of yourself and just enjoy it!

SF: All the guys you'll see on stage are naturals. Ever since we were kids, [a] vivid imagination, making things up, and messing around in the playground basically. You've hit it with your last line: at some point you're going to make a fool of yourself, just enjoy it and the audience will too.

ILQ: What qualities do other comedians have that you admire?

ILQ: Where do you draw your best improv material from?

SF: From the audience, and that little box in the back of my brain labeled ‘silly stuff’.

ILQ: What happens if the audience doesn’t laugh, and how do you deal with hecklers?

SF: If the audience doesn’t laugh, then I come on and save the day. It's not a stand-up gig – it's improv – so heckling doesn't work and the audience realizes that. Besides, they'd have to deal with [fellow comedian] Ian Coppinger, He's only five-foot tall but he can give you a nasty bite on the ankle!

ILQ: Is this your first time performing in Qatar or the GCC region? What advice would you have for Qatari comedians looking to find their feet outside of the region?

SF: We’ve been to Qatar many, many, many times and we love it. If anything, it's a little too hot. As to Qatari comedians looking to find their feet outside the region, my advice, get a passport.

ILQ: Can someone learn to be funny on-stage – or is it a ‘you’re either born with it or you’re not’ kind of thing?

SF: You can learn to be funny on-stage, but you’ll never be as funny as someone ‘born with it’.

ILQ: As a veteran in the industry, what are some of the biggest mistakes new comedians make?

SF: Too much too soon – ambition is the enemy of creativity.

ILQ: Worst moment on-air or on-stage, and best moment in a few sentences!

SF: Worst moment: Fell off stage in Ireland and now have a trapped nerve in my neck.

Best moment: Fell off the stage in Ireland and got the biggest laugh ever!

ILQ: As someone who makes people laugh for a living – what message do you have to get people to come out on Saturday?

SF: Please do come and see this show; I know I'm in it but it’s very, very funny. Bring your friends, bring your family – bring someone you've just met! I guarantee you will laugh a lot.

Do you want to be one of two fortunate followers to win two tickets each to this Saturday’s Whose Line Is It Anyway? improve comedy show at The Grand Hyatt Doha? To enter, click here. Winners will be announced on Wednesday, May 10, 2017!

Tell us what makes you laugh in the comments section below and don’t forget to give us a like and a share – it keeps us going!

If you have anything you want to share with us, send us an e-mail at con[email protected]!