What is Hajj and how is it performed? 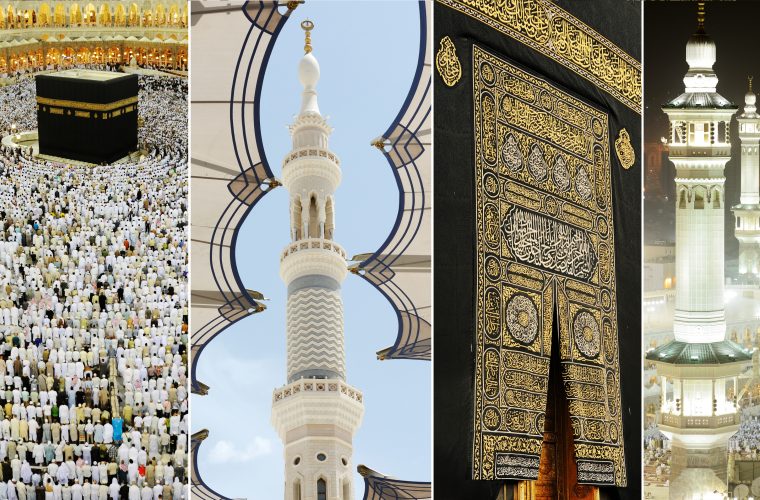 Hajj, the Islamic religious pilgrimage to Makkah in Saudi Arabia, is one of the five pillars of Islam, and is a must do for every Muslim at least once in their lifetime as long as they are financially able to and healthy. Believe it or not, it’s the biggest yearly gathering of humans anywhere in the world. Hundreds of thousands of Muslims (the numbers are increasing every year) come to Makkah from all across the globe by air, land and the sea to perform the annual pilgrimage, which is followed by Eid al-Adha, the second of the two Eids.

‘Hajjis’ as the pilgrims are referred to, come in special Hajj groups. If they have time before Hajj, they go to Madinah for a few days to pray at Masjid Nabwi and stay in the second holiest city in Saudi Arabia, (Makkah being the first) where The Holy Prophet Muhammad - peace be upon him (pbuh) is buried, otherwise they go straight to Makkah, perform Hajj and if they have the time, go to Madinah afterwards.

The Hajj rituals last five days and during this time, all Hajji’s pray together, live together, eat together and perform the rituals of Hajj together. Everyone is equal; there is no distinction between colour, caste or creed.

Hajj takes place in the month of Dhul Hujjah (8th – 12th) and has been taking place every year since it first started in 630 CE. Since dates for Hajj are based on the Hijrah calendar (which was started during the times of The Holy Prophet Muhammad (pbuh) when he emigrated from Makkah to Madinah to spread Islam), and not on the Gregorian calendar (the calendar we use on a daily basis), the Gregorian dates change every year. The Hijrah year is based on the sighting of the crescent moon every month, so the month may have 29 or 30 days based on this sighting, which is why Hajj may come 10-11 days before the previous year.

The Ihram which is the special clothing worn by all Hajjis, men and women, during Hajj, is a very important part of the sacred pilgrimage.

Men: Men’s Ihram consists of two white pieces of cloth; one for the lower body which must cover the knees, but not the ankles, and the second one is used to cover the upper body in such a way that the right shoulder is left exposed. Both pieces of cloth must be unstitched.

Women: For women, it is necessary to cover the whole body with loose-fitting clothes and cover the head in such a way that not a single hair should be visible. The arms should be covered till the wrists and the legs upto the feet. It is forbidden for the women to cover their faces or hands during Hajj, even if it something they do on a daily basis.

Children: Children are not required to wear Ihram, though some parents like to dress their children in the Ihram.

Once the hajjis have donned their Ihrams, they are forbidden to use any scents on their body, cut their hair or trim their nails till the Hajj is over and they have removed their Ihrams.

As the Hajjis travel towards Makkah to perform the Hajj on 8 Dhul Hijjah, they must stop at a place called Meeqat where they shower and change into their ‘Ihrams’.

Once the Hajjis have donned their Ihrams, they recite the following supplication called the ‘Talbiyah’:

(translated into English below):

The sounds of this Hajj supplication can be heard all over Makkah and is recited by all the Hajjis.

Hajjis then proceed to the tent village of Mina which is 8 kilometres from Makkah. Hajjis must spend the whole day and night in Mina, in prayer, and devote their time to the worship of Allah.

Early the next day, Hajjis travel onwards to the Plain of Arafat, just after the dawn prayer (Fajar). Arafat is 14.4 kilometers from Mina. This is the main day of Hajj and Hajjis spend the whole day in Arafat on, around or near the mountain of Arafat, which is also known as the ‘Mount of Mercy’ praying for Allah’s mercy and forgiveness and devoting their time to the worship of Allah.

The mountain of Arafat is the place where The Holy Prophet Muhammad (pbuh) gave his last sermon. There is a sermon on this day by Makkah’s renowned Islamic cleric (‘Imam’) and Hajjis ask Allah to forgive their sins, seek mercy from Him and pray for peace for all humanity. The midday prayer (Zohar) and the afternoon prayer (Asar) are shortened from four ‘Rakahs’ to two each and performed together instead of at their usual times.

Muslims around the world who are not performing Hajj often fast on this day from dawn to dusk, just for Allah’s pleasure.

After the sunset prayers (Maghrib), the Hajjis move towards the vast plains of Muzdalifah by car, bus and even on foot. The journey is 9 kilometers from Arafat to Muzdalifah. The night is spent under the stars on the ground. This is where they collect pebbles, either at night or early the next morning, before they proceed to ‘Jamraat’ in Mina.

‘Jamarat’ in Mina is the location of three huge pillars that signify ‘Shaitaan’ (devil/satan). After the dawn prayers (Fajar), the Hajjis return to Mina to the site of ‘Jamarat’ and perform ‘Rami’ which is the stoning of the largest of the three pillars by throwing seven pebbles that were collected in Muzdalifah, at them.

This stoning of the ‘Jamarat’ is symbolic of the time when Ibrahim was commanded by Allah to sacrifice his son Ismail for Allah’s sake. It is believed that ‘Shaitaan’ appeared in the spot where the ‘Jamarat’ is located and tried to persuade Ibrahim to disobey Allah’s command. Ibrahim, apparently, threw pebbles at the ‘Shaitaan’ to scare him away.

After the stoning, the Hajjis slaughter an animal (goat, sheep, or a portion of a cow or camel) in the name of Allah to symbolize Allah’s mercy towards Abraham who was just about to sacrifice Ismail, when, just in time, Allah put a sheep in Ismail’s place saving him, and rewarded Abraham who was willing to sacrifice his son for Allah’s sake.

Even those who are not performing Hajj, must sacrifice an animal on this day.

After the sacrifice, the men shave their heads or trim their hair. This is called ‘Halaq’. All Hajjis, men and women, remove their Ihrams and wear their normal everyday clothes, though women must continue to cover their heads. All over the world, Eid al-Adha is celebrated on this day.

Many Hajjis, at this point, then go to the Grand Mosque 'The Haram' in Makkah to perform Umrah which consists of ‘Tawaaf’ (walking/circling around the ‘Kaaba’ seven times) and then ‘Saee’ (walking or running between the hills of ‘Safa’ and ‘Marwah’ (these hills are located within the Mosque. ‘Saee’ is performed in commemoration of Abraham’s wife Hajra who ran between the two hills desperately looking for water to quench her young son’s thirst. It is during this time, that a spring of water appeared at Allah’s will to quench the thirst of Hajra and her son. This water continues to flow from this spring to this very day and Hajjis drink from this pure water.

After the Umrah, all the Hajjis return to Mina.

On days 4 and five of Hajj, Hajjis continue throwing seven pebbles each at the ‘Jamarat’ and this time, also include the other two pillars.

These last two days and nights are spent in Mina, in worship of Allah, after which the Hajjis perform the final ritual of Hajj by doing the farewell ‘Tawaaf’.

Many people return home after this, while others carry on to Madinah and spend a few days there before returning to their home countries.

Did you like this article on Hajj? Did it help you to understand what Hajj is and how it is performed? Were you able to understand the significance of Hajj? Do let us know what you think in our Comments section. Like and share the article – it keeps us going!