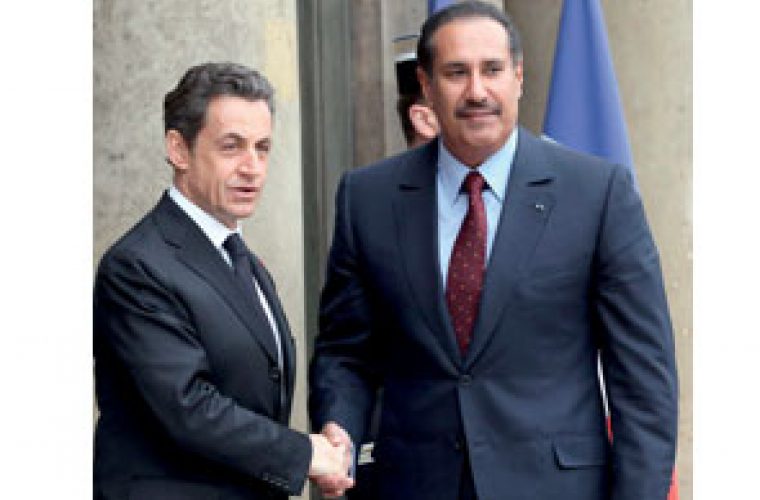 estern forces hit targets along the Libyan coast yesterday, using strikes from air and sea to force Muammar Gaddafi’s troops to cease fire and end attacks on civilians. French planes fired the first shots in what is the biggest international military intervention in the Arab world since the 2003 invasion of Iraq, destroying tanks and armoured vehicles in the region of the rebels’ eastern stronghold, Benghazi. Hours later, British and US warships and submarines launched 110 Tomahawk missiles against air defences around the capital Tripoli and the western city of Misrata, which has been besieged by Gaddafi’s forces, US military officials said. They said US forces and planes would take part in the five-country operation “Odyssey Dawn”, along with Britain, France, Canada and Italy. Some 25 coalition ships, including three US submarines armed with Tomahawk missiles, are stationed in the Mediterranean. Libyan state television said the “crusader enemy”, a reference to Western forces, bombarded civilian areas of Tripoli and fuel storage tanks that supplied Misrata. It claimed a French warplane was shot down in the Njela district of Tripoli Earlier yesterday, Gaddafi’s troops pushed into the outskirts of Benghazi after a unilateral ceasefire declared by his government failed to materialise, prompting leaders meeting in Paris to announce the start of military intervention. “Those taking part agreed to put in place all necessary means, especially military, to enforce the decisions of the UN Security Council,” French President Nicolas Sarkozy said after meeting Western and Arab leaders. Qatar’s Prime Minister and Foreign Minister HE Sheikh Hamad bin Jassim bin Jabor al-Thani attended the summit. Sarkozy said the operation, also backed by Arab nations, would continue unless the Libyan leader ceased fire. “Colonel Gaddafi has made this happen,” British Prime Minister David Cameron told reporters after the meeting. “We cannot allow the slaughter of civilians to continue.” He later appeared on television to say that British forces were in action over Libya. Gaddafi had said Western powers had no right to intervene. “This is injustice, this is clear aggression,” government spokesman Mussa Ibrahim quoted Gaddafi as saying in a letter to France, Britain and the UN. “You will regret it if you take a step towards interfering in our internal affairs.” In Tripoli, several thousand people gathered at the Bab al-Aziziyah palace, Gaddafi’s compound that was bombed by US warplanes in 1986, to show their support. France and Britain have taken a lead role in pushing for international intervention in Libya and the US - after embarking on wars in Afghanistan and Iraq - has been at pains to stress it is supporting, not leading the operation. Clinton said the US would bring its “unique capabilities” to bear to help its European and Canadian allies in enforcing the UN resolution passed on Thursday. Reuters