There is a new way to get around the West Bay district in Doha with the start of the New Year 2014. Ministry of Municipality and Urban Planning and the Ministry of Transport have jointly launched yesterday a new Bus Shuttle Service for the West Bay district under the auspices of His Excellency Sheikh Abdul Rahman Bin Khalifa Al Thani, Minister of Municipality and Urban Planning and His Excellency Jassem Bin Saif Ahmed Al Sulaiti., Minister of Transport.

The bus will undoubtedly help reduce congestion by eventually allowing passengers to park-and-ride in various locations around West Bay. The inspiration behind the eye-catching branding is West Bay?s skyline, an iconic graphic element that makes the area a recognized landmark and gives the bus a glamorous and sophisticated appeal. The West Bay Bus is equipped with an internal TV system, air-conditioning and high quality leather seats which all combined promise an enjoyable ride for passengers.

The Bus Service will initially offer 14 buses, available seven days a week running every 15 minutes between 06.00 AM and 12.00 AM and stopping at 36 bus stops spread around the West Bay area. There will be two routes. (map below) The first route will link West Bay with City Centre, the Corniche and the General Post Office whilst the second route will link West Bay with City Centre, Al Bidda Street and Khalifa Stadium. On both routes, the bus will stop at all major hotels, offices and residential towers in West Bay. Customers visiting or staying at any of the hotels serviced by the West Bay Bus will certainly enjoy this new 5 stars service Customers interested in using the West Bay Bus can simply wait at any of the bus stops highlighted in the map below. Mowasalat?s website, call center and email will also provide the riders with the information needed.

Pocket maps are available at any of the hotels, residential buildings or office towers serviced by the bus in the West Bay area as shown in the map below. In due course the addition of new routes and bus stops may be introduced. ( http://www.baladiya.gov.qa/cui/view.dox?id=702&siteID=2&contentID=2354) 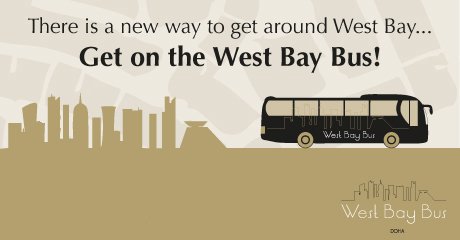 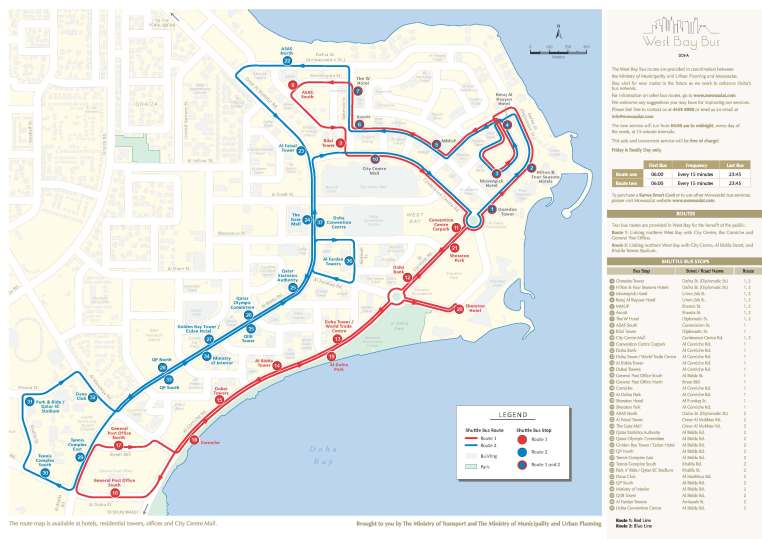