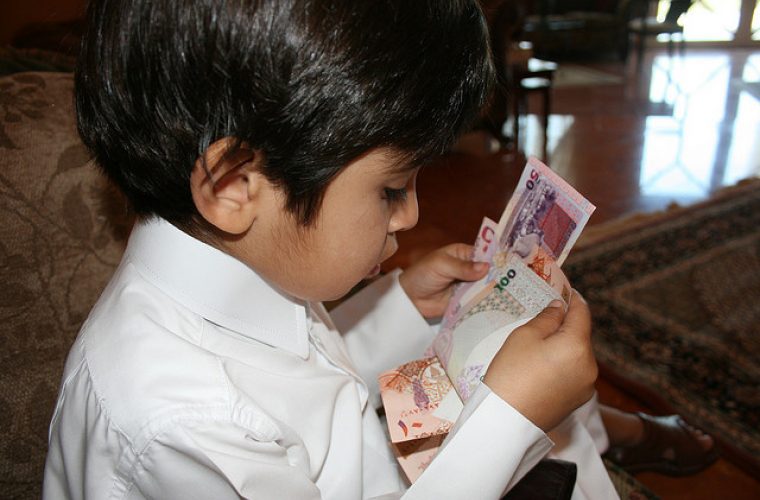 It is customary for children to visit neighbours and families of relatives and friends, particularly on the first day of Eid Al Fitr. Elders in these families give away cash gifts to them as a token of love.

People keep bundles of crisp and new currency bills in various denominations ahead of Eid — mostly of QR10, QR50 and QR100 — to distribute to children. In rare cases, some people even part with 500 riyal notes offering them to children who are closely related.

In the years gone by, people gave away to children as (‘Eidia’) currency notes of QR5 or QR10.

The times have changed and Qatari families have become rich now so people have upped the amount. “They now give away at least two currency notes of QR10 and sometimes even QR50 to a child who visits them,” said a community elder. “Yes, QR20 to QR50 is normally the range,” prominent psychologist, Dr Moza Al Malki, said in remarks to this daily.

“If a child is a close relative, some people can part with a 100 riyal note,” she added.

“But I have never heard that someone has given away QR500 notes,” she said when asked if parting with big denomination currency bills as Eid gift was a trend these days.

Al Malki said Eid celebrations were quite subdued this year since public events were cancelled due to the Israeli aggression in Gaza.

“And then the weather was so hot and humid that not many children were seen making rounds in their neighbourhoods collecting cash,” she said.

The other reason why there wasn’t much mobility of children this Eid was because many families travelled overseas vacationing, she said. Famous Qatari newspaper columnist, Faisal Al Marzouki, talking of ‘Eidia’, said rarely did someone give away a QR500 currency bill to a child. “If at all, such a child would be very close relative.”

Children happily collect such cash and then spend in groups watching movie and having fun or eating out. Some prefer to buy electronic gadgets like iPads and mobile phones, say community elders.

Agreeing with Al Malki that people normally give away QR20 to QR50 as ‘Eidia’ to children, Al Marzouki said that was like encouraging consumerism among people from an early age. “We must cut wasteful expenditure or we would continue to be financially burdened.”