Walking woes in Doha as pavements get ‘encroached’ 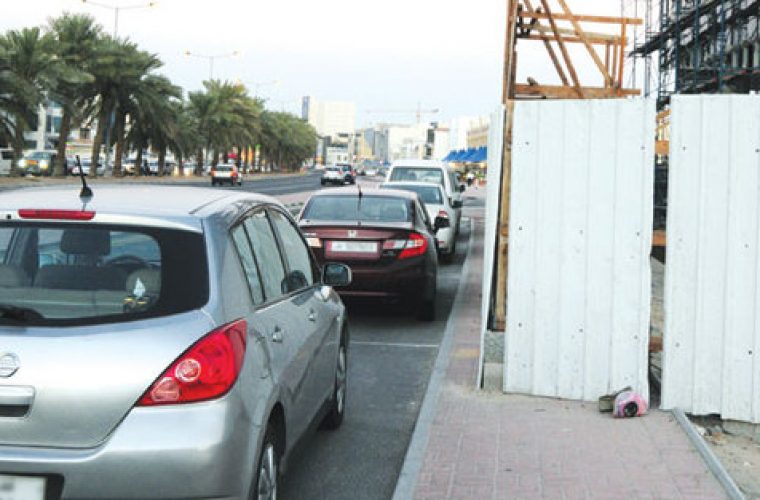 The “encroachment” of pavements by contractors executing construction projects in several locations has made things difficult for pedestrian these days. Left with little or no space on the footpaths, pedestrians are often forced to walk on the roads – putting their lives in danger and also posing a threat to motorists. Worryingly, this is happening at a time when the country’s authorities are going ahead with their ambitious plans as part of the ongoing campaign by the National Committee for Traffic Safety. While the traffic authorities keep reiterating the importance of pedestrian safety, many contractors seem unaware of the seriousness of the matter and end up blocking portions of pavements, which makes pedestrian movement rather difficult. Gulf Times had earlier reported that “about 80 pedestrians die in Qatar every year and more than 200 suffer from severe injuries that require hospitalisation”. A visit to some of the busy streets of Doha reveals the extent of the problem. An “encroachment” by a contractor near an intersection in Najma has not only affected the visibility of motorists but also prevented pedestrians from using the pavement there. While the issue has reportedly been brought to the attention of the authorities concerned, the obstacles on the pavement are yet to be removed. A similar encroachment can be seen along a service road near the Gulf Cinema signal on the busy C-Ring Road. Meanwhile, “encroachment” by a contractor along the Corniche has not only deprived passengers of a proper bus stop, but also stopped pedestrians from using the footpath along the construction site. As a result, passengers have no place to wait in the area and are forced to stand by the road while waiting for a bus. Some residents of Doha Jadeed have also complained that many footpaths in the area have been “taken over” by contractors. Such “encroachments” are leading to other problems as well, including non-availability of parking space. In the vicinity of Souq Haraj’s southern gate, one can find signboards put up by a contractor, prohibiting motorists from parking vehicles in the designated area in front of a new building coming up there. It has also been found that the company has “taken over” the entire pavement by erecting a fence along the place. Some shopkeepers in the neighbourhood say they have raised the matter with the contractor more than once but nothing has changed and no parking is possible in the area even now. http://www.gulf-times.com/qatar/178/details/373633/walking-woes-in-doha-as-pavements-get-%E2%80%98encroached%E2%80%99