Walk in support of fight against cancer 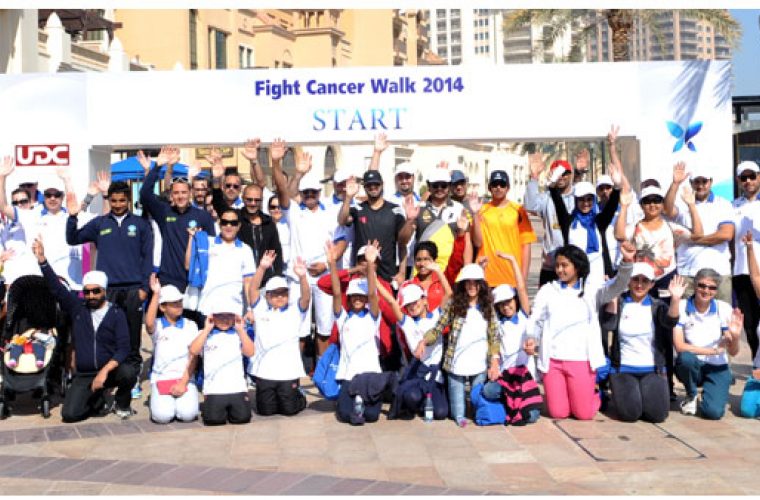 Scores of residents took part in the “Fight Cancer Awareness Walk” at the Pearl Qatar yesterday.
Organised by the Qatar Cancer Society (QCS), the walk, part of a major awareness campaign launched in January, was held in conjunction with the United Development Company (UDC) and the Pearl Qatar to raise awareness of the disease as well as to show support for people suffering from cancer.
During the event, UDC made a donation of QR20,000 to QCS.
In Qatar, breast and colo-rectal cancers are prevalent among women and men respectively.
QCS is a humanitarian organisation dedicated to the prevention and treatment of cancer and focuses on the implementation of awareness and prevention programmes aimed at informing the public and healthcare professionals on the disease.
The organisation reaches out to cancer patients, survivors and their families to help alleviate distress and suffering as well as help facilitate recovery through both emotional, as well as monetary support.
QCS chairman Dr Khalid bin Jabor al-Thani, who is also the president of the Gulf Union Against Cancer, stressed the importance of the support being provided by institutions and companies operating in the country in creating awareness about healthy practices.
The campaign is expected to continue until the end of this month.
QCS thanked all the participants in the event as well as the corporations and institutions that contributed in any way to support the walk.
He said their contributions reinforced QCS mission to create awareness about prevention methods as well as how to cure cancer.
Dr Khalid al-Thani maintained that the walk demonstrated that the Qatari society is willing to show support for cancer awareness as well as preventing it from spreading in the community either by healthy eating habits or through exercise.
A UDC spokesperson said: “The choice of the Pearl Qatar by the Qatar Cancer Society is good because here is a good place to launch the campaign for the fight against cancer. The location will ensure that all segments of the society are reached as the Pearl Qatar has become one of the destinations for families at all times.”