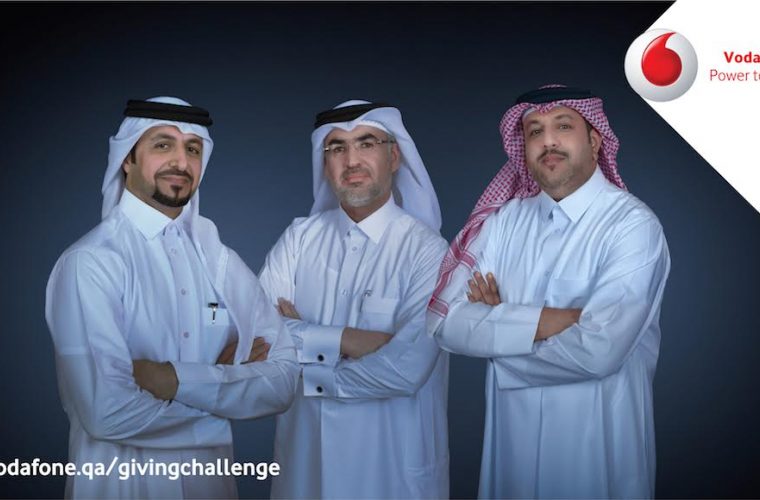 Vodafone is holding the third edition of its fundraising campaign #GivingChallenge that will see 3 Qatari social media influencers using their social media followership to raise funds for their chosen charity during the holy month of Ramadan.

Aqeel Al-Janahi, Ahmad Abdallah and Ahmad Khalil will use their social media channels to encourage their followers to vote for their chosen charities via Vodafone’s Giving Challenge website: Vodafone.qa/givingchallenge. For each vote, Vodafone will donate 10 QR to each charity by the end of the campaign on 14 June 2017.

“We’re delighted to bring back the #GivingChallenge for the third time this Ramadan. The Vodafone Fundraising Challenge is an opportunity for the public to discover new ways to do good in the giving spirit of this holy month. I’m confident the charity ambassadors participating this year will raise significant funds for their chosen charities while also raising awareness about the honourable work that these charities do,” said Dana Haidan, Vodafone Qatar’s Head of CSR.

Last year’s edition of Vodafone’s hugely successful #GivingChallenge raised a total of QR 1,008,500 for charities in Qatar and reached over 5 million people via social media. The fundraising challenge was heavily supported by the charities and leading Islamic scholars who used their own social media channels and various events to encourage people to vote for the charities.

Aqeel Al-Janahi is a media personality and an ambassador for a number of charities. He is one of the first and leading media personalities in Qatar for over 30 years and is a social activist who’s passionate about doing charitable work having received several awards for his contribution to humanitarian initiatives. Aqeel has chosen to fundraise with Afif Charity to support cataract surgery for 1000 visually impaired patients in Niger, a country that lies well below the poverty line. Due to inadequate and unhealthy nutrition, clean water and hygiene problems, continuous exposure to solar UV radiation and most importantly the lack and absence of doctors, over 130,000 people are affected by cataract disease. To learn more about Afif Charity’s work and especially about its eye clinic in Niger, visit: www.afif.qa, and follow Aqeel Al Janahi on Instagram, Twitter and Snapchat: Aqeeljanahi.

Ahmed Abdullaa is a Qatari actor and writer who started his acting career in theatre using it as a platform to address key social issues and was one of the founders of Qatari theatre arts. He has published a book entitled “The Story of Theatre in Qatar” to document the beginnings of theatre arts in Qatar in addition to writing and starring in over 24 theatre shows and 30 television and radio dramas. Ahmed is an active supporter of several charities and plays a significant role in supporting community development initiatives in Qatar. He has chosen to represent Qatar Charity in the Giving Challenge, fundraising to make the wishes of orphans come true through Qatar Charity’s “Omnyaati” programme. With the conflicts in the region, the number of orphans is well over 13 million orphans in the Middle East. Qatar Charity has won several awards for their significant contributions to orphan support. For more information about Qatar Charity, visit: qcharity.org, and you can follow Ahmed Abdullaa on Instagram, Twitter and Snapchat on AhmedAbdullaa.

Ahmed KhalilAl-Khaldi is the former goal keeper of the Qatar National Team and one of Qatar’s football legends who has played a key role in the success of several Qatari football teams such as Qatar, Al Khor, Al Sadd and Al-Arabi earning several local and regional titles in his football career. After retiring from football, he moved to TV as a sports anchor in BeIN Sports where he employs his sports expertise combined with a strong presence and incredible talent to share with viewers his passion for the sport. Away from sports and TV, he is a great role model for youth as he actively supports charitable projects inside and outside Qatar. Ahmed is supporting Sheikh Thani Bin Abdullah Foundation for Humanitarian Services (RAF) in the Giving Challenge, fundraising for the charity’s recently launched “Orphans City” located by the Turkish-Syrian border. The project is the largest of its kind in the world and will meet the needs of over 6000 orphans who have lost everything in the Syria conflict. To learn more about RAF, visit: raf-thani.com and follow Ahmed Khalil on Instagram, Twitter and Snapchat on: akakakak22.

Voting for the above charities and influencers starts from the first day of Ramadan until midnight of June 14, 2017 and the results will be announced in a ceremony the following day. For more information about the Giving Challenge, visit: www.vodafone.qa/GivingChallenge.