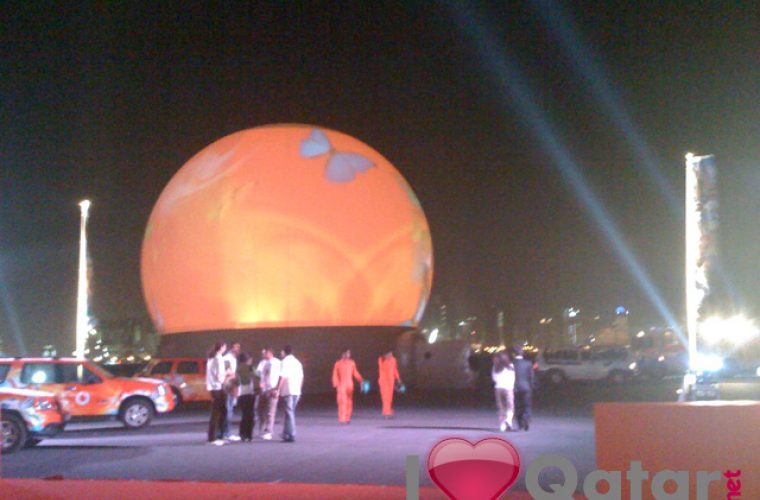 Excitement filled the air as the big day was about to start. Driving down the corniche lamp-posts had red signs which repeated the same message; "Vodafone. March 17. IPO Launch". Driving towards the Airport, on my left hand side, I could see red lights and a sphere which projected that famous droplet/speech bubble. My phone rings. It's a friend asking if I'll be going. I was indeed going to go, who would want to miss such a night? I was looking forward to seeing what was going to be in store. As I drove towards the white tent, which was designed to look like a sand dune, I looked around and thought to myself that this was the perfect place to host such an event. Out on the calm seas on such a cool day where the winds touch you gently; where on one end we have the view of the ever growing Doha skyline and to the other a perfect viewing angle of the Museum of Islamic Arts. It captured the very essence that Qatar was all about.

Photo by mistaluis Driving in though was quite daunting. The security there, who were evidently placed there suddenly and by no means selected by Vodafone, were unwelcoming and seemed to shatter any image of an enjoyable night. In front of me, I notice a black and orange Lamborghini. The security stops him and asks for his pass. He explains that he didn't bring it; VIPs after all hardly bring their invitations in Qatar. To my astonishment he's turned away, he flips the steering wheel and accelerates screaming curses into the night's sky. After managing to get in myself, I quickly point it out to some friendly Vodafone staff who are quick to get on the scene in order to explain that this is not a VIP only event and everyone is allowed to enter. Having mentioned that, I only entered because I parked a considerable distance; it's alright, I needed the exercise.

I looked around in the tent and saw some colourful seats along with some red silky seats up front. Right outside, tables full of coloured LEDs decorated the edges and were covered with sweets and cakes. Staff walked around serving juices and finger food. I for one felt like it was like a gala more than a simple IPO event.

Up prominently in the front of the entrance under a high tent was Vodafone's Formula 1 car. How much would it cost to put a small sticker on the wing, I thought to myself. How great would it be to have an ILQ sticker on that.

I looked at my watch and the time was well over the announced starting time. When it finally did start we were ushered in. A few VIPs walked in annoyed at the fact that they were asked to show their VIP pass at every point they passed. Their faces soon turned into smiles once they saw friends seated and gazed at the humungous projected screen.

After being seated, and trying to figure out how to use the head phones that were provided (for translation purposes), the lights dimmed and the sound of a formula 1 car surrounded the tent. We were played a video that conveyed Vodafone's entry to the scene. "Salam Alaykum" was repeated; (Peace on you; which is the Arabic way of saying hello). Shaikh AbdulRahman graced the stage and introduced everyone to Vodafone. There was a stone cold silence as those that had turned up wanted to know how they were going to benefit. He left the stage as everyone clapped and it was Grahame Maher who was next; the CEO, along with his colleague and CFO John Tombleson. Their words were simple. Vodafone was all about making a difference to Qatar, no scratch that, a WORLD of difference to Qatar. Were they going to do that? They genuinely seemed to think that they had the power to do so, who was I to argue? We need this new energy. We need this new enthusiasm and hope to make Qatar a better place. The details of the IPO were given in summary. It was open to Qatari Nationals and Qatar Institutions at first. Meaning that it's open to everyone on the secondary market. The minimum for Qatari's would be 250 with a priority of up to 2,500 in increments of 50. Who'd be investing though? The ultimate question was asked by a person in the crowd. It's true, do people have money to invest? The answer put simply is yes. Not only is the IPO shaped in such a way that it makes everyone beneficial, but Qataris are looking for that little something to help them recoupe their losses. At a minimum of 250 and priority of 2,500 shares, why not right? I called some relatives to ask a few questions. "What would you do?", i asked. "I'd go for the max I'm guaranteed", they said. "Why?", I replied. "Because it's a sure winner, look at the current market, Vodafone is a safe company and at such a low starting price, it's sure to jump up".

As long as everyone still thinks that's the case, Vodafone will be the best bet you can get at this point. For me? I'm going all in because I know, or at least majlis talk has lead me to believe, that everyone's willing to support that red droplet. ILQ NEWS

NEWS / TECHNOLOGY
How is Fusion Technology accelerating innovation in Qatar