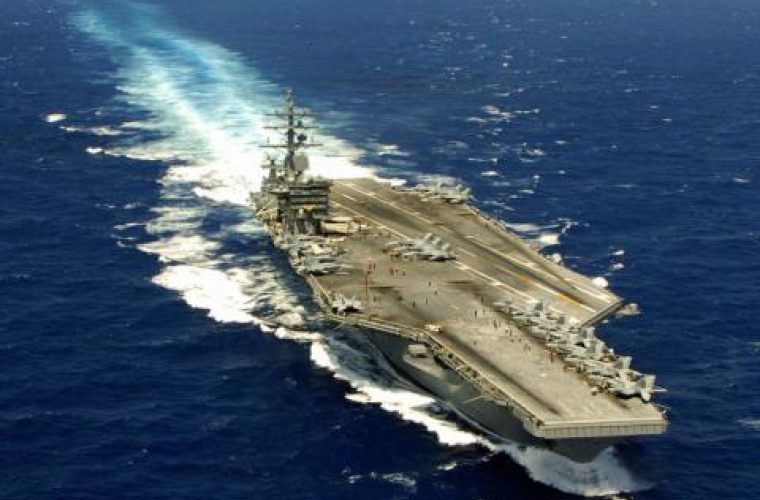 The Pentagon is cutting its aircraft carrier presence in the Persian Gulf region from two carriers to one, the Defense Department said Wednesday, in a move that represents one of the most significant effects of budget cuts on the U.S. military presence overseas. The decision comes as Washington struggles to find a way to avoid sharp automatic spending cuts set to strike the Pentagon and domestic programs next month. Defense Secretary Leon Panetta has approved keeping just one carrier in the Persian Gulf region. The U.S. has maintained two aircraft carrier groups in the Gulf for most of the last two years as reported by Qatar Chronicle. Panetta has been leading a campaign to replace the automatic cuts he warns would “hollow out” the military, and the Pentagon has been providing greater details on the cuts it would have to make if Congress fails to both replace them and agree on a 2013 defense budget bill. The carrier decision is one of the most significant announcements made thus far. Plans for the USS Harry S Truman to deploy to the Gulf later this week have been canceled. The USS Dwight D. Eisenhower, brought home from the Gulf in December for the resurfacing of its flight deck and other maintenance, will return later this month and stay until about summer. The USS John C. Stennis will leave the Gulf and return home after the Eisenhower arrives. Pentagon press secretary George Little issued a statement Wednesday afternoon confirming the carrier decision after The Associated Press, citing unidentified U.S. officials, reported Panetta’s move. Little said the Navy asked Panetta to delay the deployments of the Truman and the USS Gettysburg, a guided-missile cruiser, because of budget uncertainty. “This prudent decision enables the U.S. Navy to maintain these ships to deploy on short notice in the event they are needed to respond to national security contingencies,” Little said, adding that the U.S. will maintain “robust military presence” in the region. In 2010, then-Defense Secretary Robert Gates approved a formal directive to keep two carrier groups in the Gulf amid escalating tensions with Iran. It has been part of a U.S. show of force in the region, particularly in an effort to ensure that the critical Strait of Hormuz remains open to naval traffic. Iran has repeatedly threatened to close the strategic waterway, which is the transit route for about a fifth of the world’s oil supply, in retaliation for increased Western-led sanctions. The Pentagon blamed the decision on budget shortfalls in the current fiscal year spending as well as the threat of across-the-board automatic budget cuts that will be triggered if Congress doesn’t act to stop them by the beginning of March. Congress has not approved a budget for this fiscal year, and instead has been passing bills to continue the same level of spending as last year. As a result, the Pentagon is operating on less money than it budgeted for this year. On Wednesday, Panetta laid out a grim list of spending cuts the Pentagon will have to make in the coming weeks that he said will seriously damage the country’s economy and degrade the military’s ability to respond to a crisis. Criticizing members of Congress as irresponsible, Panetta said lawmakers are willing to push the country off a fiscal cliff to damage their political opponents. If Congress doesn’t pass a budget, Panetta said, the Pentagon will have to absorb $46 billion in spending reductions in this fiscal year and will face a $35 billion shortfall in operating expenses. “My fear is that there is a dangerous and callous attitude that is developing among some Republicans and some Democrats, that these dangerous cuts can be allowed to take place in order to blame the other party for the consequences,” Panetta said in a speech at Georgetown University. “This is a kind of ‘so what?’ attitude that says, ‘Let’s see how bad it can get in order to have the other party blink.”’ On Capitol Hill, a group of GOP lawmakers from House and Senate offered a plan to cut the federal workforce and use the savings to replace some $85 billion in across-the-board budget cuts to the Pentagon and domestic programs. The legislation reprises a plan offered last year that failed to advance.

NEWS / EDUCATION
Why Step by Step Centre for Special Needs is the right choice for children...